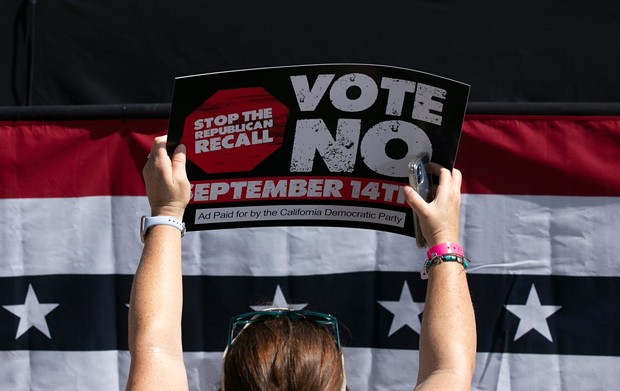 With the wreckage of the failed recall attempt against Gov. Gavin Newsom still smoldering, California Democrats have reached a new consensus: They really don’t want to do that again.

On the morning after voting ended and recall candidates conceded, the chairpersons of the election committees in the state Assembly and Senate said they’re kicking off a public debate to overhaul California’s recall process.

“Californians are very frustrated that we just spent $276 million on this recall election that, from the looks of it, certified what voters said three years ago and what voters could have said next year,” Assemblymember Marc Berman of Los Altos said at the virtual press conference Wednesday.

In unofficial and partial statewide returns, 5.8 million Californians voted to keep Gov. Newsom in office, compared to 3.3 million who voted to remove him. Newsom, himself, says the recall has been “weaponized.”

Berman and Glazer said they plan to hold joint hearings as soon as next month. They also want the discussion to be bipartisan.

The Little Hoover Commission, a nonpartisan, independent state oversight agency, also announced this week that it would be looking into possible changes to the state recall.

But it’s not clear if any Republicans, who put so many electoral chips on the recall, will get on board.

“Democrats continuously try to manipulate the rules to support their political interests, so it’s not surprising to see them trying to do it again at the expense of voters they were elected to serve,” California GOP Chairperson Jessica Millan Patterson said in a statement. “They wouldn’t have to worry about a recall if they were doing their jobs and addressing wildfire prevention, homelessness, crime, taxes and fixing the broken unemployment department. You want to prevent a recall, do your job.”

Republican Kelly Seyarto from Murrieta, vice chairperson of the Assembly election committee, was non-committal. “I am looking forward to participating in these hearings to ensure that we have a recall process that continues to hold elected officials accountable and protects the rights of voters to participate in our democracy,” he said in an emailed statement.

GOP political consultant Dave Gilliard is skeptical that any members of his party will ultimately back a change to the recall rules. “There is zero chance any Republican will go along,” said Gilliard, who worked on the successful 2003 campaign to recall Democrat Gray Davis, as well as this one.

Sen. Josh Newman, a Democrat from Brea who in 2018 became the most recent state official to be removed from office by recall, also doubts whether any recall reform will be bipartisan. “I would be tickled pink if any member of the Republican caucus on either side of the Legislature stepped up to support meaningful changes to the recall at this point,” said Newman, who was elected again in 2020.

On Wednesday, Newman said he will introduce two constitutional amendments to change the process: One to make it more difficult for recalls to qualify for the ballot, and a second that would replace a recalled governor with the lieutenant governor.

Once a rarely used — and to many voters, thoroughly obscure — provision of the state constitution, California’s recall is now the subject of unprecedented scrutiny. That’s because though the state’s last Republican governor, Arnold Schwarzenegger, was elected via recall in 2003, this year’s attempt put some of the system’s quirks into sharp relief.

Unlike in 2003, when Davis was polling in the mid-20s, Newsom faced a recall despite remaining broadly popular with California voters. That’s convinced many Democratic legislators that the law makes it too easy to put a recall on the ballot.

And unlike in 2003, when Schwarzenegger won with 48 percent of the vote and had more support than the 45 percent who wanted to keep Davis, there was no such frontrunner this year. Given the quirky two-questioned structure of the recall, 2021’s fragmented field could have produced a candidate like Larry Elder who became the next governor after winning fewer votes than were cast in defense of Newsom.

“California laws should not allow an elected official to be recalled and then replaced by someone else who receives far fewer votes, and I really look forward to hearing from a bipartisan group of experts about how California’s recall process should be reformed,” said Berman.

On the Democratic side, momentum for change has been building for months. Earlier this summer, California Secretary of State Shirley Weber said the state’s recall rules deserve a “second look.” More recently, former Democratic Gov. Jerry Brown called the process “awkward and cumbersome and certainly a distraction” while Davis, the state’s only recalled governor, has his own ideas for reform.

“It’s a process that was put in place about a century ago and it certainly bears looking at,” Assembly Speaker Anthony Rendon said in a television interview Tuesday night.

There are two reasons that Democrats will likely have an easier time changing the rules after this recall than they did in 2003, said UC San Diego political scientist Thad Kousser.

“One, the Democrats won by the rules of the game and now they can change those rules without looking like sore losers,” he said. “And two, they have the votes.”

As for Californians themselves, a recent UC Berkeley survey of registered voters found that an overwhelming majority, 75 percent, look upon the electorate’s recall powers favorably. But a consistent majority also favor making tweaks to the process.

The call for legislative hearings is only the first step in a long process. Any serious alterations would require constitutional amendments. That means getting two-thirds of both legislative chambers on board to put the question to voters. That won’t happen until 2022 at the earliest.

While Democrats have enough votes in both the Assembly and Senate to put constitutional amendments on the ballot, it would likely take some independent voters, as well as Democrats, to win approval statewide — thus at least the window dressing of a bipartisan recall reform effort.

Glazer and Berman said they were “open minded” about the range of changes up for debate. Here’s a short list of possibilities, ranked from more minor tweaks to outright nixes:

Increase the requirements for recalls

A recall election against a governor qualifies for the ballot if its supporters can gather signatures equivalent to 12 percent of the turnout in the prior gubernatorial election. This time around, that number was just shy of 1.4 million; recall proponents collected more than 1.7 million.

Of the 19 states that allow voters to put a recall on the ballot, only Montana makes it easier, with a 10 percent threshold. Other states put the requirement between 15 percent and 40 percent.

The current cutoff may have made sense in 1913 when the recall was introduced as a popular check against the political influence of railroad interests, Newman said. But in the age of social media, he said he’d like to see the requirement set at “something more rigorous” to “adjust for political inflation.”

Gilliard, however, dismissed the suggestion that it’s too easy to put a recall on the ballot.

“In 108 years, two gubernatorial recall elections have qualified for the ballot,” he said. “How can anybody with a straight face argue that it’s too easy or it’s being abused when it’s happened twice in 108 years?”

UC Berkeley Law school Dean Erwin Chemerinsky, who has argued that the state’s recall may be unconstitutional, countered that Californians live in a more polarized political environment in which Republican activists are more likely to use the recall to win in low-turnout off-year elections when they can’t succeed in regularly contests.

“We should realize that we may be in an era where there’s going to be more and more efforts to use recalls if changes aren’t made,” he said. “I hope that this is not going to be a situation where people breathe a sigh of relief and just forget about it until the next time this happens.”

Add a ‘cause’ requirement

In the governor’s office, as in any job, California is an at-will employment state. Any governor can be recalled at any time for any reason. No justification required.

While no-cause recalls are the norm, that isn’t true in every state. Rhode Island, for example, requires that the governor have broken a law or gotten into trouble with the state’s ethics commission before booting them from office.

Without weighing in on the idea directly, Berman said the debate over whether “criminal misconduct or malfeasance should be a kind of threshold issue is something that we’re going to discuss.”

Make the lieutenant governor the replacement

Unlike the ballot pairing of candidates for president and vice president, the lieutenant governor is elected separately and serves independently.

Newman, for one, favors elevating the lieutenant governor if a governor is removed and going without the second question on replacement candidates.

“We have a number two constitutional officer in California,” he said. “If you think the governor’s malfeasant, by all means, let’s have a plebiscite and remove him or her from the office. But let’s not use that as the pretext for getting a hidden ball trick do-over.“

Unlike some more expansive reform proposals, this one would only apply to recall efforts against the governor.

As many confused California voters only recently learned, Newsom was not listed among the candidates vying for office on the recall ballot. That wasn’t an oversight; election law doesn’t allow an incumbent to run as his or her own replacement.

Sen. Ben Allen wants to change that. He introduced a constitutional amendment last year in response to Newman’s recall that would nix the first question altogether. If a recall qualifies, the state would go straight to a snap election. The idea: Avoid the counter-intuitive possibility that a recall winner could earn fewer votes than those cast to keep the incumbent in office.

A potential downside: There would be no requirement that the winner receive a majority. In a large field of candidates, like the 46 on this year’s recall ballot, the next governor could win with a sliver of the vote.

So why not hold a run-off election between the top two vote-getters, as in regular elections?

“Two rounds of recall elections on top of our regular election cycle?” asked Allen. “It would certainly be fairer than the current model, but I’m not sure that it would be particularly satisfying. In this case we would have had Elder versus (Democrat Kevin) Paffrath — would that really have solved everyone’s problems?”

Just get rid of the recall

Maybe one gubernatorial election every four years is enough?

This proposal isn’t likely to go anywhere, no matter what some political commentators might say. The recall remains popular as a general concept, even if there’s criticism of the specifics.

“Neither of us,” Glazer said with Berman, “are suggesting that the recall process be eliminated.”