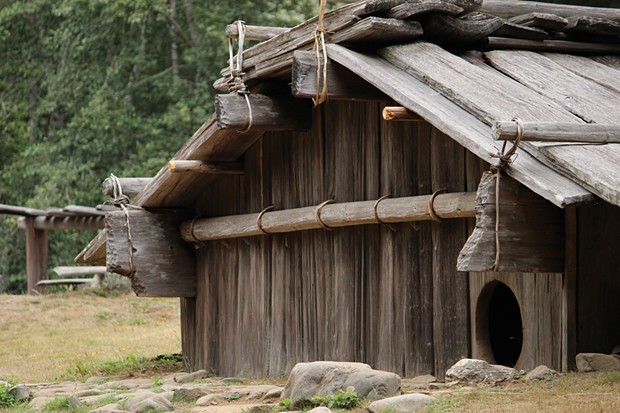 Since time immemorial, the Yurok people have called the coastal area north of Trinidad — located in the heart of their ancestral lands — Sue-meg. Now, some 170 years after the name was usurped, the 1-square-mile property with meadows, forest lands and long beaches stretched out below soaring cliffs will officially be known as Sue-meg State Park.

The State Parks and Recreation Commission voted unanimously Thursday to — as one commissioner said — “restore the name” to the unit originally designated as Patrick’s Point State Park.

“Reclaiming a name is really the core to this,” Commissioner Sara Barth said, noting she did not consider the decision a “renaming.” “It’s restoring a name that was inappropriately taken.”

The change is the first for a State Park under California's "Reexamining Our Past Initiative," which was launched by the state last year to address what California Natural Resources Secretary Wade Crowfoot described as "historic names that stem from a dark legacy that includes discrimination, violence and inequity."

California State Parks Director Armando Quintero, who appeared emotional as the final vote was cast, his hands clasped together in front of his face, called the decision “a momentous step to heal relationships with Native Americans and working together in recognition and honor of indigenous cultural and linguistic relationships.”

Several members of the Yurok Tribe talked to the commission about the importance of giving the land back its rightful name and removing the moniker that referred to Patrick Beegan, an Irish immigrant who briefly laid claim to the jutting peninsula in the 1850s as whites infiltrated the area amid the gold rush.

Historians believe Beegan to be responsible for numerous atrocities, including the murders of Native Americans, among them a young Yurok boy. He lost the property after fleeing law enforcement in connection with the killing.

“Indigenous people across the world … are either watching or listening and looking at the opportunity we have here today,” he said. “By renaming Sue-meg back … that’s bringing balance back to us as Yurok people.”

Yurok Tribal Heritage Preservation Officer Rosie Clayborn spoke of the attempted genocide and destruction of Indigenous communities that occurred after contact, with Native people subjected to institutionalized violence and driven from their ancestral lands, their families ripped apart as children were forcibly sent to boarding schools in an attempted to strip them of their culture. Not all of them came home.

“My ancestors and Yurok ancestors fought hard to stay connected to this place that we call Sue-meg and surrounding places. They fought with their lives,” she said, noting the name of the boy killed by Beegan was never documented in the official records of the time, and that he will never receive full justice for what was done to him.

“But what we can do,” she said, “is honor their legacy by using our language.”

Clayborn began choking up as she related how such intergenerational traumas are not long in the past, sayings she’s had the opportunity to talk with Yurok elders who were among those taken from their homes and sent to boarding schools. The scars of what they endured — including the beatings they received for speaking their language — are still evident, she said.

Restoring the name Sue-meg, Clayborn said, carries a great meaning to the Yurok people and is an act that bridges both the past and the future.

“It gives a more balanced and just world for not only Yurok children but to all children.”

The "Reexamining Our Past Initiative" that led to the designation of Sue-meg State Park builds on Gov. Gavin Newsom's formal apology in 2019 for the state's systemic role in the attempted genocide of Native communities and efforts to annihilate their cultures. Newsom’s initiative also set up the tribally-led Truth and Healing Council to "correct the historical record and acknowledge wrongdoings."

Terry Supahan, director of the faith-based True North Organizing Network, which has formed an intertribal committee on name changes, applauded the decision in a news release.

“This is about a healing journey and a pathway forward,” he said. “It is so important to our communities throughout Northern California that we recognize the genocide that Indigenous people have experienced here, and move toward ‘settling up’ and making things right, so that we can work together to care for special land and to be responsible for climate change.”

Along with his apology and formation of Truth and Healing Council, last year the governor also launched California’s “30 by 30” initiative, which aims to conserve 30 percent of state land and coastal waters by 2030 through voluntary efforts with Native American tribes and private landowners, as well as federal and local governments.

“The renaming of Sue-meg State Park is a major first step toward respecting Indigenous traditional knowledge of how to steward these lands appropriately,” Skip Lowry, a local father of Yurok, Mountain Maidu and Pit River descent, said in a release. “We hope that this is the beginning of true consultation and collaboration between California government agencies and native Tribes on ancestral territories now known as state parks, national parks and public lands.”

When Sue-meg State Park — a 600-acre property that stretches from north of Trinidad up past Agate Beach — was brought into California State Park's fold nearly 100 years ago, the area was already well known as Patrick's Point in reference to Beegan and so the name remained, until now.

Long before, however, Sue-meg was an integral cultural and trading center for the Yurok people. In the 1970s, the place was chosen as the reburial site for the remains of tribal ancestors returned by the State Parks Department in a landmark case. 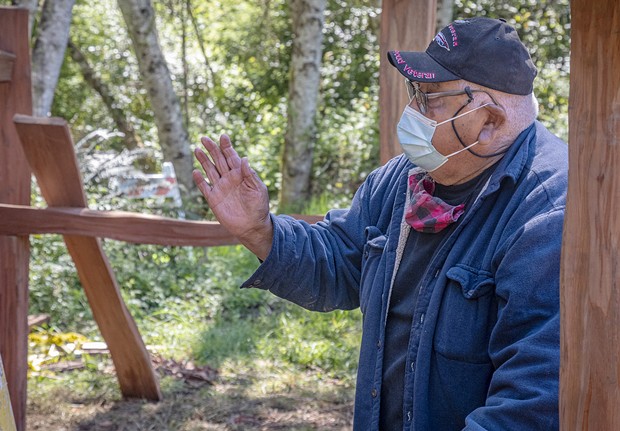 Walt Lara Sr., who served for seven years on the Native American Heritage Commission of California — which was a key litigate in the case and instrumental in securing protections for Native graves and burial sites — spoke at Thursday’s meeting about the ceremony, saying there were no Yurok prayers to address the moment, so a tribal elder created one.

“It more or less was, ‘We’re putting our people back to rest again and leave them be and don’t bother them anymore,’” Lara told the commissioners.

Now 86, Lara also participated in the original construction of the Sue-meg Village at the park in the 1980s, an effort led by tribal members Dewey George, Jimmy James and others using traditional skills, and he is now overseeing restoration of the Yurok ceremonial site.

Lara told the commissioners he feels very good about seeing the name Sue-meg restored to the land.

“The governor gave an apology to our people and this will seal it as far as I’m concerned,” he said.