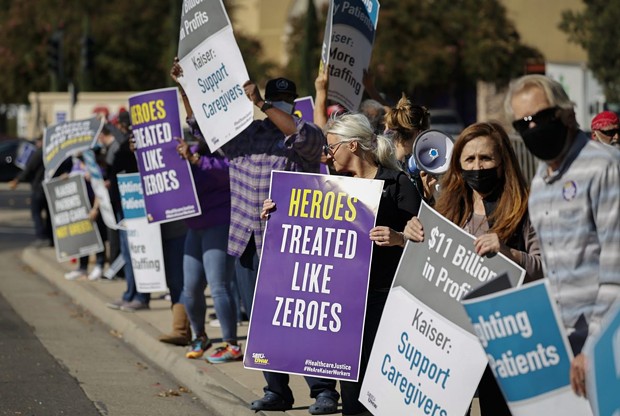 As weary health care workers across California enter the 19th month of the pandemic, thousands are walking off the job and onto the picket line, demanding more staffing.

The strikes and rallies threaten to cripple hospital operations that have been inundated by the COVID-19 Delta surge as well as patients seeking long-delayed care.

More than two dozen hospitals across the state — including some Kaiser Permanente and Sutter Health facilities and USC Keck Medicine — have experienced strikes by engineers, janitorial staff, respiratory therapists, nurses, midwives, physical therapists and technicians over the past four months.

This week, nearly a third of all California hospitals reported “critical staffing shortages” to the federal government, with more predicting shortages in the coming week. Hospitals are unable to meet the state’s required staff-to-patient ratios for nurses or schedule adequate numbers of other critical personnel.

In the Central Valley, the region hit hardest by the Delta surge, National Guard medics have been deployed since September to assist area hospitals.

The reason for the shortages? Record patient volumes at the same time that many workers have been driven away from the bedside by burnout, early retirement and the seemingly unending stress of the pandemic.

SEIU-United Healthcare Workers West estimates that about 10 percent of its members — close to 10,000 people — have retired, left the profession, or taken extended leaves of absence during the pandemic.

“What’s really important is that 10 percent doesn’t turn into 15 percent, does not turn into 20 percent. There’s not enough temporary staff out there to fix what’s going on,” said Dave Regan, president of SEIU-UHW.

The shortages are an untenable scenario, unions say — one that has persisted for many years brought to a boiling point by the pandemic.

Since the pandemic began, union grievances with hospitals are increasingly about inadequate staffing, although bargaining over pay remains a key issue.

Money matters when it comes to holding onto workers, they say, especially because temporary staff brought on for pandemic response often make more than regular employees. In some instances, traveling nurses have been paid $10,000 per week at California hospitals with severe staffing needs.

“You’re paying exorbitant amounts for travelers while the existing workforce makes exactly the same amount (as before the pandemic),” Regan said.

Striking to “stop the bleeding”

Early in the pandemic, Gov. Gavin Newsom announced efforts to expand the health care workforce through a volunteer health corps. Although tens of thousands signed up, most people didn’t have the necessary medical skills, and only 14 volunteers worked out.

Unions say those efforts are a Band-aid on a larger problem. Instead, they say policymakers should get hospitals to try harder to retain their current employees.

“Right now, hospitals, the health industry, the state of California, you need to do a lot more so that it doesn’t get worse,” Regan said. “We’re doing very little as a state to support this workforce that has been under a really unique set of pressures.”

In an early attempt to stop the churn, SEIU-UHW sponsored a bill that would have provided hazard pay retention bonuses to health workers. Opposed by the hospital association. the bill died after a third reading in the Assembly and did not make it to the Senate.

Assemblymember Al Muratsuchi, a Democrat from Torrance who introduced the bill, said the hospitals’ claims that they couldn’t afford hazard pay were unfounded since they received billions in federal pandemic funds, some “specifically earmarked for hazard pay and bonuses for frontline workers.”

“The state made a decision that they were not going to provide financial incentives to recognize and retain healthcare workers, and we think that’s shortsighted,” Regan said.

In Antioch, more than 350 workers at Sutter Delta ended a week-long strike over inadequate staffing Friday but have yet to reach a contract agreement with their employer.

In the Victor Valley and Roseville, hundreds of workers staged recent rallies and vigils to highlight what they’re calling a “worker crisis.” Advocates say their upcoming schedules are packed with pickets planned in solidarity with other unions.

And perhaps the strongest flexing of union muscle has come in Southern California, where members of the United Nurses Associations of California/Union of Health Care Professionals, or UNAC/UHCP, voted overwhelmingly to approve a strike against Kaiser Permanente if negotiations remain at a standstill. Should a strike materialize in the coming weeks, more than 24,000 members would walk out of the health care giant’s medical centers and clinics in more than a dozen cities.

Although the dollars and cents of bargaining vary from union to union, the common thread is clear: They want employers to “stop the bleeding” of health care workers fleeing the profession and invest more in recruiting and retaining staff.

The union found 72 percent of its members — which includes nurses, occupational and physical therapists, midwives and other medical staff — were struggling with anxiety and burnout, and between 42 to 45 percent reported depression and insomnia. About 74 percent said staffing was a primary concern.

How hospitals are responding to shortages

Hospitals say it is not as easy as hiring more employees. With so many people leaving the workforce, there aren’t enough candidates to fill the gap. Even support staff like janitors, cafeteria workers, clerks and assistants are in short supply.

“There is no question there is a shortage of health care workforce. We have far fewer people in the workforce today than we did when the pandemic started,” said Jan Emerson-Shea, spokesperson for the California Hospital Association.

Many hospitals have offered employees shift bonuses, child care subsidies and temporary housing to keep them from spreading the virus to family members while keeping them at patients’ bedside. But it hasn’t been enough.

“I don’t know that it’s anybody’s first choice, but we are in a situation where we have to rely on the travelers (traveling nurses),” Emerson-Shea said. “Hospitals would much rather have their permanent staff, but in this situation, with as long as it has been and the workforce dynamics so complex, we need both.”

The state hospital association has asked state Health and Human Services Secretary Dr. Mark Ghaly to assist hospitals with workforce concerns in part by reinstating funding for traveling workers and making it easier for hospitals to get exemptions from the state’s strict nurse-to-patient ratios. In a written response, Ghaly said the state would continue helping designated surge hospitals pay for extra staff and was working to expedite nursing ratio waivers for heavily impacted regions.

“There’s no resolution yet, but the conversations are occurring, which is important because we are not through the pandemic,” Emerson-Shea said.

Like many industries, hospitals rely on historic averages to predict the need for employees. The average number of patients in a given time period determines how many employees will be scheduled each day. The problem, workers say, is that using the average means frequently they are working with minimal staff.

“There needs to be a massive paradigm shift of how hospitals treat clinicians, and that’s less just-in-time staffing and less just-in-time supplies,” said Gerard Brogan, director of nursing practice at the California Nurses Association and National Nurses United.

“Between the first surge and second surge, we had several months where there was zero planning. There were no new grad programs, there was no new hiring,” Sidhu said.

“So going into that second surge, which was really bad here in California, we knew we were in trouble,” Sidhu said. With adequate staffing prior to the pandemic and efforts to increase staff levels in between surges, workers would not have burned out so rapidly, he contends.

Bargaining over salaries and benefits between Kaiser and Alliance of Health Care Unions, which includes the Southern California group UNAC/UHCP, stalled at the end of September after five months. The strike authorization is the first of its kind for UNAC/UHCP in the past 26 years, and members say long-standing staffing issues and burnout contributed to employee dissatisfaction.

“The vote to authorize a strike by union members is disappointing, especially because our members and communities are continuing to face the challenges of the ongoing pandemic,” Arlene Peasnall, Kaiser’s senior vice president of human resources, said in a statement. “In the event of any kind of work stoppage, our facilities will be staffed by our physicians along with trained and experienced managers and contingency staff.”

‘Burnout can only be getting worse’

In a recent study by the UC San Francisco Health Workforce Research Center on Long-Term Care, the number of nurses aged 55 to 64 planning on quitting or retiring in the next two years jumped nearly 14 percent between 2018 and 2020, setting up the field for a five-year shortage.

Joanne Spetz, the center’s associate director of research and lead study author, said new graduates before the pandemic sometimes struggled to find employment while employers frequently complained about not being able to find enough experienced nurses to hire. But the overall number of nurses in the workforce was enough then.

Now, with nurses reducing their hours or quitting, the state is in a more tenuous position. About 7% fewer nurses reported working full-time in 2020 compared to 2018, and sharp declines in employment were seen among nurses 55 years and older, according to the study.

“We’re looking at having a shortage in the short term,” she said. “The wild card is, with the pandemic lasting this long, burnout can only be getting worse. What if we have a bunch of 30 to 35 year-old nurses who say ‘screw this,’ then we’re losing a lot of years of working life from these nurses.”

Sidhu is one of those experienced nurses who found himself reeling from the dual forces of COVID-19’s brutal emotional toll and short staffing.

He had volunteered to work with the first COVID-19 patient that arrived at his ICU in March 2020. That first patient quickly turned into dozens each day, with many dying.

“One day you walk in and your unit is full, and two days later you walk in and a large portion of those patients have passed away. You’re double-stacking body bags,” Sidhu said.

He struggled with anxiety, anger and insomnia before his shifts, knowing there would be more patients than nurses could care for, and that they would have no time for breaks. He said he was told that under the state’s temporary emergency waiver of nurse-to-patient ratios he would have to take on more patients.

A year into the pandemic, Sidhu called it quits and now works as the union’s treasurer. Of the eight members in his original ICU nursing team, only two remain working, he said.