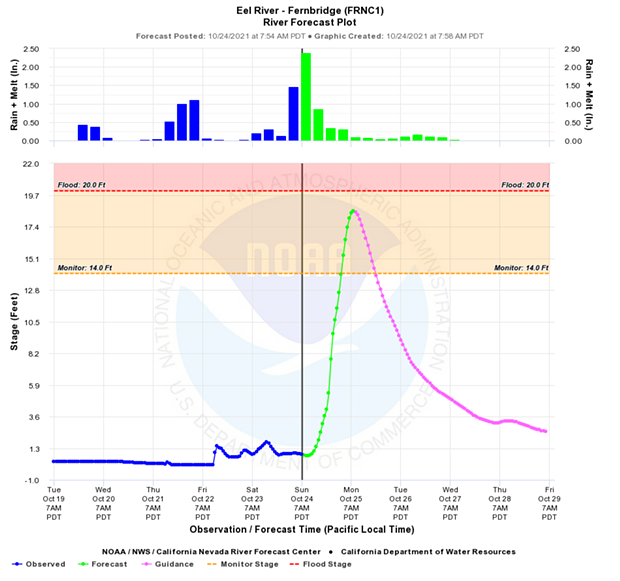 Heavy rains combined with high tides are expected to cause flooding in low-lying areas, including parts of Cannibal Island Road and Camp Weott Road, with the Eel River expected to hit monitor stage around 2 a.m. Monday before hitting a high of  18.5 feet around 8 a.m.

Flood stage is 20 feet, according to the River Forecast Center. A flood watch is in effect for some parts of the county, including areas around Hoopa and Garberville.

Residents who live in flood-prone areas of Humboldt County are advised to make preparations.

According to the Eureka office of the National Weather Service, the atmospheric river event that brought heavy rains and strong winds this morning, could cause areas streams and creeks to rise rapidly and motorists should watch for debris in local roadways. Periodic strong gusts are still possible today.

Meanwhile, a heavy surf advisory goes into effect at 5 p.m. today and runs through 8 p.m. Monday for what are forecast to be up to 30-foot breakers along the coast, creating dangerous seas and life-threatening surf conditions.

“Large breaking waves along the coast will lead to increased wave run-up on beaches with waves topping and washing over large rocks and jetties. These large waves can be erratic and unpredictable,” the NWS advisory states. “Use extra caution near the surf zone as these large waves will be capable of sweeping people into the frigid and turbulent ocean water. Mariners traversing the bar are urged to exercise extreme caution or stay in port until the threat subsides. Please contact the Coast Guard for information regarding harbor and bar closures.”