November 07, 2021
1 comment
This summer during the Eureka Street Art Festival, artist Dave Young Kim painted a mural depicting a Mandarin duck and Ben Chin, the first Chinese American to open a business in Eureka in 1955, 70 years after the mass expulsion of Chinese people from the town. That mural, emblazoned with the word “hometown,” stands in an alley between E and F streets and Fourth and Fifth streets, where Eureka’s Chinatown once served as home to more than 200 immigrant workers. And at the Nov. 2 Eureka City Council meeting, the council voted to approve renaming that alley Charlie Moon Way, honoring one of the Chinese residents who resisted the expulsion and remained in Humboldt County. 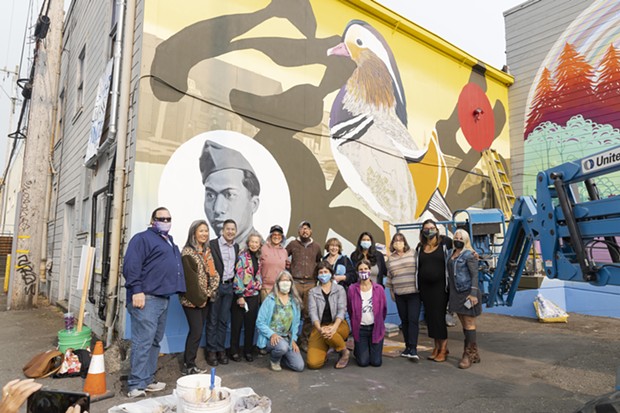 The hope is to “create a space for learning about those stories,” according to Brieanne Mirjah D’Souza of the Eureka Chinatown Project, which first proposed the renaming before the city council in May. While a number of names for the alley were considered, “We really thought naming this after a person specifically would be a way to color in the lines of the story” of Chinese people in Humboldt. And Moon, she says, “represents so much more, and a crossing of communities.” Given the number of local Native people who can trace their lineage back to Moon, Mirjah D’Souza says, “We’re not just honoring someone who’s passed — it’s his descendents that will be around.”

Moon, whose employer at Bair Ranch in Redwood Creek refused to turn him over to white men who came to get him during the 1885 expulsion, married Minnie Tom, a Native woman of the Chilula Redwood Creek Tribe, with whom he had eight children. Yolanda Latham, Moon’s great-great granddaughter, is among his many living descendents and has been in discussion with the ECP about its efforts to learn more about Moon and rename the alley over the last several months. Latham says she reached out to the group after seeing the alley renaming on the city council agenda. Amid escalating racism and violence against Asian Americans and Pacific Islanders across the country, especially attacks on elders, she says it felt important to contribute to something positive.

“Bringing this to light is a good step toward healing,” says Latham. She adds that, between the state-sanctioned genocide of Native people and the expulsion of Chinese residents under threat of death, “The Moon family has been disproportionately exposed to violence and trauma and murder.”

She says she gives a lot of credit to Mirjah D’Souza, the ECP and Humboldt Asians and Pacific Islanders for the passion they’ve put into the project and its resulting “energy snowball.”

Mirjah D’Souza says she’s grateful for the openness of the families who’ve shared personal stories and histories. The greater community has been supportive, as well. “We had unanimous votes of support from the open space community services group and the planning commission. … The energy around this project has been so positive.” But the work is not done yet, as the group is also in the process of creating a Chinatown monument on space offered by Coast Central Credit Union. “It’s really important that we do it and do it right,” Mirjah D’Souza says.

The whole process has been surprisingly emotional for Latham, who’d always heard about her great-great-grandfather from her family, despite the persistent myth that all the Chinese had been expelled from Humboldt County in 1885. “For the first time in my life … someone said, ‘Hey, you know what? Charlie Moon existed.’”