Earthquake Swarm Off the Oregon Coast 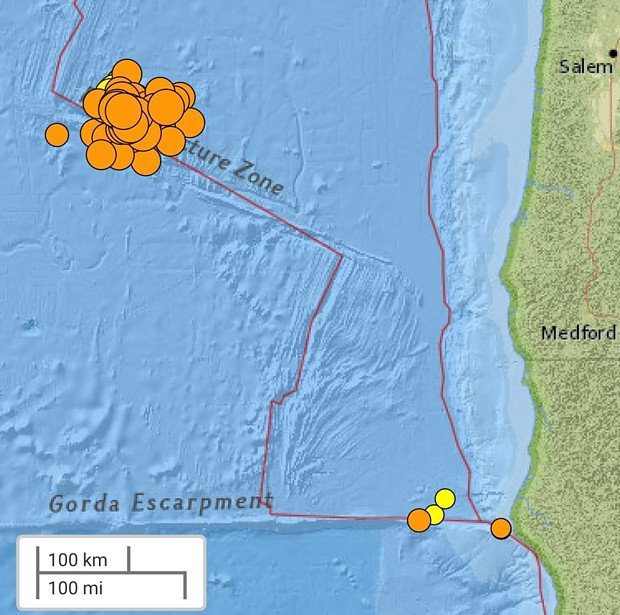 If you haven’t heard, there’s a whole lot of shaking going on off the coast of Oregon.

Over the last 24 hours, a swarm of more than 50 earthquakes have been recorded on one of the region's most active faults, including two magnitude-5.8s and six magnitude-5.5s, according to USGS.

The Redwood Coast Tsunami Work Group says the Blanco Fault sequence, which began at 5:21 a.m. yesterday, is occurring in an area 240 to 290 miles offshore between Salem and Medford, so few reports of shaking have been recorded.

This is by no means the first time the Blanco Fault has pumped up the volume, so to speak, according to the work group’s  daily earthquake update, noting back on Jan. 15, 2003, 16 magnitude-4.0 or larger quakes were recorded on the fault, including two magnitude-6.3s.

“That sequence was over in a few days,” the post states.

Officials and scientists say there’s no need to panic about the current activity.

"The Blanco Fracture Zone is not connected directly to the subduction zone so it won't affect the big fault under land (Cascadia megathrust)," said Eric J. Fielding, a geophysicist at NASA's Jet Propulsion Laboratory in Pasadena, told NPR.

Nearly 600 earthquakes larger than magnitude-4.0 have occurred on the Blanco Fault since 2000, the tsunami working group’s post states.

“Based on past behavior, it is unlikely to lead up to a much larger earthquake and has no direct effect on earthquake activity closer to the coast (a 2.9 and 3.6 hit off Petrolia on Tuesday),” the update states.  “But every earthquake is always a reminder that we live in earthquake country and that a potentially damaging earthquake could happen at any time.”