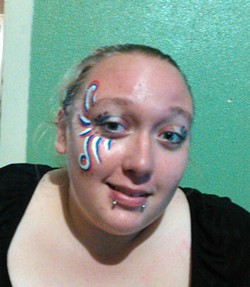 One day before the fifth anniversary of 18-year-old Jennika Lee Suazo being found dead in a P Street residence where she lived, the Eureka Police Department announced 34-year-old Anthony Lee Hamilton has been charged with her murder.

According to a news release, Hamilton has been in custody on unrelated charges since 2017.

The Eureka Police Department handed the case over to the Humboldt County’s District Attorney’s Office in May.

“Thank you to Jennika’s family and friends for their patience over the last five years,” EPD  Senior Detective Amber Cosetti said in the release. “Your love for Jennika was strong throughout the entire investigation.”

Suazo was found dead by her roommates on Dec. 9, 2016, and her death was considered at the time to be suspicious. Results of an autopsy later determine her cause of death to be asphyxiation.

Hamilton is currently serving a 40-year sentence at Corcoran State Prison for the attempted murder of a Del Norte County Sheriff’s Office deputy, as reported earlier by Redheaded Blackbelt.

According to a 2020 Court of Appeal opinion, which affirmed his conviction a year earlier, Hamilton was attempting to evade CHP officers with another person and they both ditched the vehicle when the pursing officers lost sight of them.

“Deputy Sheriff Joseph Aguirre arrived at the location of the vehicle and saw defendant running through a grove of trees. He turned on his body camera and, with his weapon drawn, began searching for defendant,” the opinion states in describing the background of the case. “The deputy saw him in heavy brush, and as he reached for his radio microphone to notify other officers of defendant's location, a gunshot came from the brush and struck his left wrist and his radio microphone and then penetrated his left shoulder. He fell, returned fire, sought cover, and broadcast that shots had been fired.”

According to the background section, two officers heard the gunshots and ran to the deputy’s location, where all three continued to “fire in the defendant’s direction.”

“When they were able to approach him, they found (Hamilton) lying on the ground with a revolver next to him, two rounds having been fired and four live rounds remaining,” the opinion states. “Defendant suffered multiple gunshot wounds.”

In that case, Hamilton is not eligible for parole until 2047, according to the California Department of Corrections and Rehabilitation.

Humboldt County District Attorney Maggie Fleming told Redheaded Blackbelt that she contacted Jennika’s mom yesterday to tell her about the charges against Hamilton.

“I have let the family know it may take a bit of time for the defendant to be arraigned because he is in prison for attempted murder and COVID restrictions may delay his return to the Humboldt County Correctional Facility,” she said.

5 years ago, 18-year-old Jennika Lee Suazo was found deceased in her residence on the 300 block of P Street in Eureka. For years, Eureka Police Department Detectives interviewed dozens of people, analyzed evidence, and waited for DNA results. After a thorough investigation, the Eureka Police Department completed its case in May of 2021 and forwarded it to the Humboldt County District Attorney’s Office with a request that 34-year-old Anthony Lee Hamilton be charged for the murder of Suazo. Earlier today, Hamilton was formally charged for the murder of Jennika Lee Suazo. Hamilton has been in custody since 2017, on unrelated charges. Senior Detective Cosetti said, “Thank you to Jennika’s family and friends for their patience over the last five years. Your love for Jennika was strong throughout the entire investigation.”

On December 9, 2016, at approximately 12:46 pm, officers from the Eureka Police Department responded to the report of a deceased female at a residence on the 300 block of P Street in Eureka. As the first officer arrived to investigate, he confirmed there was a deceased 18-year-old female found by roommates inside the residence. Eureka Police Detectives with assistance from investigators from the Humboldt County District Attorney’s Office began an extensive investigation involving some 22 people residing in the residence. An autopsy is scheduled for later this week and the female’s identity is being withheld pending family notification. At this time the female’s death is determined to be suspicious. Anyone with information about the incident is asked to contact Detective Amber Cosetti at (707) 441-4300.

Nearly a year ago, on December 9, 2016, 18-year-old Jennika Lee Suazo was found deceased in her residence on the 300 block of P Street in Eureka. Detectives with the Eureka Police Department began an extensive investigation involving 22 people residing in the residence. In June of 2017, the results of the autopsy were received and the cause of death was determined to be asphyxia. The case is being investigated as a suspected homicide. Eureka Police Department is still awaiting DNA laboratory results and continues to actively investigate this case. Detectives have kept the Suazo family informed during this process. Anyone with information regarding this case is asked to call Detective Amber Cosetti at (707) 441-4300.