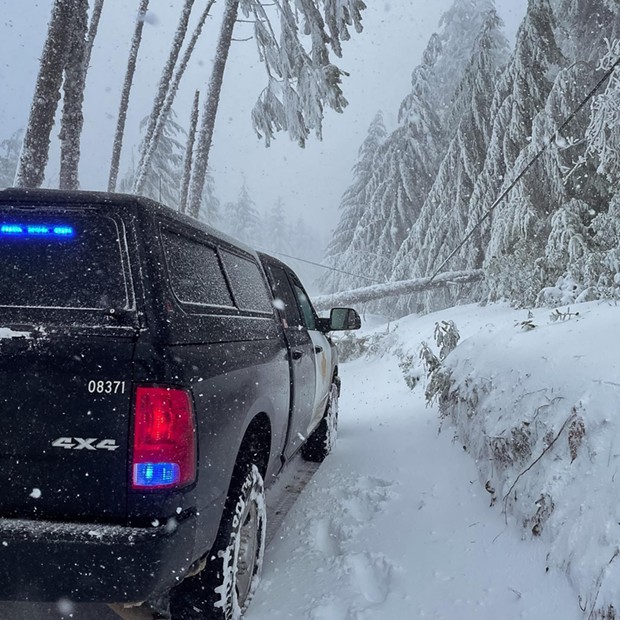 
Emergency work along state routes 299 and 96 to clear snow, downed trees and power lines has both roadways still closed Tuesday, according to Caltrans' QuickMap site around 9 a.m. State Route 299 is shuttered from Buckley Road to State Route 96, which is closed to post mile 4.6. State Route 299 is also closed from Burnt Ranch to 4.4 miles east of Salyer.


Meanwhile, thousands living around those state route corridors remain without power amid frigid temperatures, with several areas not slated to regain power until Dec. 30 and others still without an estimated time of restoration, according to the PG&E outage map.

A local emergency has been declared. Read more here.

“Aside from heavy snowfall in the roadway, the storm caused numerous trees to collapse which subsequently caused power lines to fall onto the roadway,” the CHP release states. “The California Department of Transportation (DOT) and PG&E have worked around the clock in an effort to reopen the road but their efforts have been slowed by additional fallen trees.”

New road information from Caltrans has road closures still in place for state routes 36, 96 and 299 with no estimated time for reopening.

State Route 36 – Closure from east of Bridgeville and west of Dinsmore due to snow and powerlines on the roadway. No estimated time for reopening of closure.

State Route 96 – Closure from north of Willow Creek to south of Hoopa due to snow and trees on the roadway and electrical work. No estimated time for reopening.

State Route 299 – Closure from east of Blue lake to west of Willow Creek due to snow and trees on roadway. No estimated time for reopening of closure.

The Humboldt County Office of Emergency Services reports that more than 3,000 residents are without power as cold, snow and rainy conditions continue today.

Winter weather is causing havoc on local highways, with state routes 96, 299 and 36 under full closures at points due to snow, fallen trees and downed power lines.

Caltrans is reporting a number of issues on the roadways on its QuickMaps sites.

State Route 96 is under a full road closure at Willow Creek due to fallen trees,

snow, down power lines, severe winter weather conditions, with estimated time for opening. Approximately 40 trees are down on the road.

On State Route 36, the closure is listed as going from Caltrans Maintenance Station to Dinsmore Airport due to multiple power lines down.

No estimated time for opening was available. Check QuickMap for updates here.