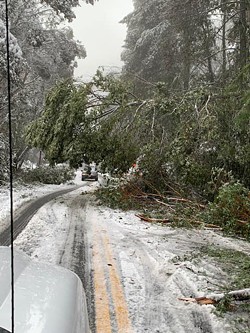 While State Route 299 reopened last night, Caltrans reports there will be sections of one-way traffic between Blue Lake and Willow Creek as crews continues to work to restore power and tackle downed trees.

State Route 96 remains closed to all but emergency vehicles and local traffic due to downed lines and trees.

Officials are again asking those who don’t need to travel to stay home and those who venture out should avoid parking on the side of the highway for the safety of crews out working.

Sheriff William Honsal declared a local emergency Monday night due to the winter storm, which has created life-threatening conditions in some areas and caused damaged across the county. The declaration will allow the county to apply for state and federal funding.

Thousands still remain without power from Hoopa to Southern Humboldt as another round of cold temperatures is in the forecast tonight, with inland temperatures in the teens and 20s, according to the National Weather Service.


For the latest road information, visit QuickMap.dot.ca.gov (or the QuickMap app).