UPDATE: No Sign of Hunter Lewis Found During Dive Search 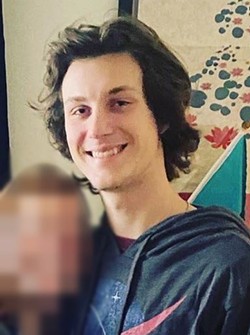 According to the Search for Hunter Lewis Facebook page, no debris field or signs of Hunter Lewis were found during today’s dive search at Flatiron Rock.

“Thank you to the divers and all the agencies that made it possible today for the search to happen,” the post states. “We will be continuing the search on beaches and asking for everyone to continue to be safe while searching.”

The search for Hunter Lewis, a college student from Blue Lake who went missing after launching his family’s canoe from a Trinidad Beach on Dec. 30, is continuing today with dive teams from Humboldt Bay Fire conducting underwater surveys in the Flatiron Rock area.

The area was selected based on information relayed by friends and family members and items found by community members who have continued to scour the local shoreline for signs of the 21 year old after an extensive multi-agency search was suspended after sundown Dec. 31.


The Humboldt County Sheriff's Office states in a Facebook post that the search crews are taking advantage of a “small window of decent weather conditions to conduct dive efforts.”


Lewis is believed to have entered the ocean in his 15-feet green fiberglass canoe between 10 a.m. and noon Dec. 30 and hasn’t been seen since. Half of Lewis’ canoe was found north of Elk Head and other items have been found in the Trinidad area.


The Humboldt County Sheriff’s Office, California State Parks and the California Department of Fish and Wildlife are assisting in today’s search.

Hunter was reported missing on Thursday, December 30, 2021, after he failed to return home from recreating in Trinidad. Hunter is believed to have entered the ocean in his canoe near Trinidad Harbor that morning.

The HBF DRRT began coordinating the underwater search this week based on new information from the family regarding Hunter’s last known destination. Due to the exceptionally high surf, tidal swings, and winds that have been present since Hunter went missing and the oncoming storm surge expected Thursday evening, the team predicted a narrow window this morning where conditions would allow for a dive.

The HBF DRRT partnered with the Humboldt County Sheriff’s Office, California State Parks and the California Department of Fish and Wildlife to conduct today’s search.

Resources used in the search included multiple boats, a sidescan and a deep-water sonar, lifeguards, divers, and a HBF rescue swimmer. The Humboldt County Sheriff’s Office also provided scene security to ensure the privacy of involved family. The team concluded their search by 1 p.m.

Unfortunately, they did not find any signs of Hunter nor any of his belongings. At this time, we are asking the public to leave aquatic search efforts to the professional rescuers. The area in which Hunter went missing is extremely hazardous given the current weather conditions and may likely endanger the health and safety of well-meaning searchers.

The Sheriff’s Office will continue to monitor local beaches for signs of Hunter or his belongings. Anyone with information regarding Hunter’s current or possible whereabouts is urged to contact the Humboldt County Sheriff’s Office at 707-445- 7251.