Tonga Tsunami: A Reminder of the North Coast's Vulnerability 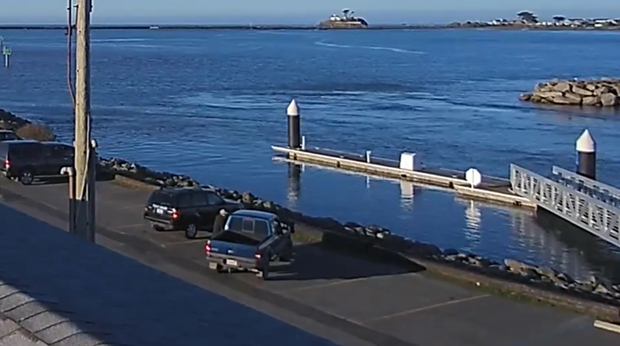 One week ago today, surges sent more than 5,000 miles across the ocean from the devastating volcanic eruption near Tonga began to hit the California coast as Humboldt County residents awoke Jan. 15 to a tsunami advisory that would span some 12 hours — and even longer just to the north in Del Norte County.

This time, however, the region came out basically unscathed.


As an advisory — which is one tier below a warning — the main danger locally was “strong currents in bays, river estuaries and harbors and more unpredictable variation in surf heights along the beach,” rather than inundation, according to Humboldt State Geology professor emeritus Lori Dengler, an expert on earthquake and tsunami hazards and hazard reduction.


“Mother Nature always has a wild card up her sleeve," she said. "We are just fortunate that this one wasn’t deadly. But, like our earthquake wake-up call on Dec. 20, the next event could be more significant.”


Other areas were not as lucky.


With information now trickling out of Tonga after the eruption severed communications, at three people have been confirmed dead, more are missing and on some islands nearly all the homes were destroyed by the ensuing tsunami.


As the surges made their way across a wide swath of the Pacific, more damage, deaths and near-misses would follow. Two women were killed after being swept out to sea in Peru and surfers were rescued from churning waters off San Francisco and Santa Cruz, the latter of which suffered an estimated $6 million in damage, according to media reports, while statewide tallies are still being calculated.


David Snider, the tsunami warning coordinator for the National Tsunami Warning Center in Alaska, described the sheer breadth of the impact as "humbling and scary."


Over the course of the Jan. 15 advisory, dozens of surges were recorded by three North Coast gauges: one located in Humboldt Bay on the Samoa Peninsula, another at Crescent City and the third at Point Arena in Mendocino, the latter two of which recorded a top water level of 3.7 feet.


The highest levels in the state occurred at Port San Luis in central California with a reading of 4.3 feet.

Those numbers were true to form for Crescent City, Dengler said, which "usually sees the highest or second highest amplitude tsunami waves no matter where in the Pacific the tsunami is coming from."


The small city in the far northern reaches of the state has the unfortunate distinction of experiencing more damaging tsunamis than any other port on the West Coast but was spared in this most recent event.


"The main reason — the tsunami wasn’t large enough to cause damage and the harbor modification done after 2011 seems to have worked," Dengler said.


Since 1933, more than 30 tsunamis have been recorded in the harbor, including some of the most destructive in the state, the most recent being just over a decade ago when the Tohoku earthquake in Japan generated waves that arrived on March 11, 2011.

While most of the Del Norte County-based fishing fleet was able to leave in the early morning hours before the surges hit, 35 boats were crushed and many of the docks were swept away, leaving behind $20 million in damage.


Almost exactly 54 years earlier, another tsunami propelled by a magnitude-9.2 earthquake off Alaska that measured more than 20-feet killed 11 people and destroyed some 29 blocks of the city.


While harbor modifications to lessen impacts have taken place over the years, a $54 million effort launch after Tohoku had state officials declaring the Crescent City Harbor "tsunami-resistant" in 2014.


But last week, there were some glitches.


The Del Norte Office of Emergency Services posted to its Facebook page a few hours into the advisory that it was aware that "many individuals did not receive the Community Alert" that had been sent out just after 7 a.m., about an hour before the first of the surges were set to hit.


The main difference between the destructive tsunami in 2011 and the one that hit Jan. 15 was size, Dengler said.

"The Japan tsunami was huge — producing a 30-plus-foot high tsunami along 300 miles of coastline in Japan," Dengler said. "By the time it got to California, it was much smaller, but still three times larger than what we experienced on Saturday. Larger amplitude means much stronger currents and the currents are what caused the damage in 2011."


And that time, the region was under a tsunami warning, meaning evacuations "in many areas of the North Coast," she said. "Evacuations were unnecessary this time."


But Dengler said there was also less time to prepare in the Jan. 15 event, with the California coastline placed under a tsunami advisory at 5 a.m. It lasted until 6 p.m for Humboldt County while the advisory wasn't lifted until around 11:30 p.m. in Del Norte County.


"In 2011, we knew what we were likely dealing with about eight hours before it hit us and the tsunami warning was issued more than six hours beforehand – giving local emergency personnel the time to coordinate evacuations, notify fishermen to get safely out of the harbor," Dengler said. "The Tonga tsunami was unprecedented, and the tsunami warning centers didn’t have their usual tools to forecast what it was likely to do. The alert was issued in Hawaii as waves were beginning to arrive and we only had about three hours prep time on the North Coast. Fortunately, it was a much smaller tsunami and evacuations weren’t necessary."


In Eureka, city staff did go to the Eureka Boat Basin in the early morning hours to notify residents living on their boats of the tsunami and advised them to leave, according to a news release. People found camping in their vehicles at the Samoa Boat ramp or other harbor areas were also notified, according to the city.

The Jan. 15 event was also "proof that tsunamis can last a long time," Dengler said, with surges continuing to be recorded along the California coastline for days.


"This illustrates why the advisory lasted so long — it wasn't cancelled in Del Norte County until 11:30 p.m. Saturday and not until 12:30 a.m. Sunday on the central California coast," Dengler said. "The warning centers need to wait until the amplitudes are consistently below 0.5 meters."


Last week's event and the magnitude-6.2 earthquake on Dec. 20 that rattled  nerves and shattered windows are both potent reminders of the nearby dangers lurking under the earth and off the coast — as well as the need to prepare.

The region's greatest threat is not from an earthquake or eruption far away but one in our own backyard on the Cascadia subduction zone, which could be followed by surges that breach beyond beaches and harbors in as little as 10 minutes, Dengler said.

In that scenario, it's unlikely people will receive a notification and the shaking will be the warning to get to higher ground, she said.

“Personal and community resilience is the key and I hope these events create the interest to find out if you live in a tsunami zone and if you do, how to get to high ground,” Dengler said.