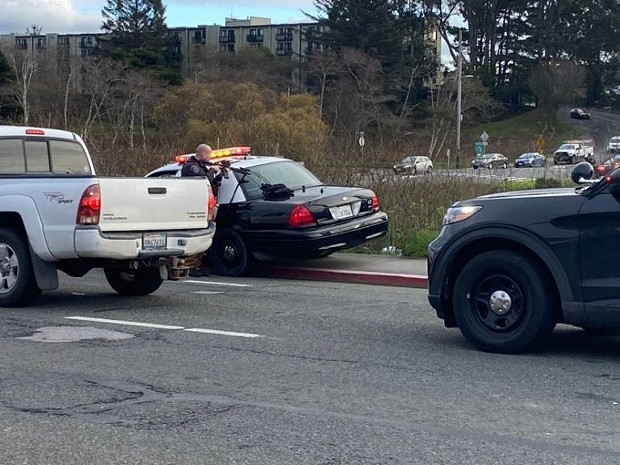 The video — which offers a limited vantage point of the shooting — is the only one available, according to EPD, as Couch was the only officer on scene with a body-worn camera and the police vehicles there were either unmarked, under-cover vehicles, or Humboldt County Sheriff’s Office patrol cars, which are not equipped with dash-mounted cameras, according to EPD spokesperson Brittany Powell.

EPD previously reported that Couch fired six rounds from his patrol rifle at Little Eagle Moon after he “began ramming law enforcement vehicles and driving towards officers.” The video shows Couch pull up to an already active scene, get out of the passenger side of an undercover vehicle and train his riffle on what appears to be a silver pickup truck, screaming, “Let me see your fucking hands,” followed by several commands to “get out of the car now.”

Within nine seconds of Couch exiting his vehicle and training the rifle on the truck, the video appears to show the truck lurch backward into a Humboldt County Drug Task Force vehicle parked behind it, at which point Couch opens fire. All six of Couch’s shots reportedly hit either Moon — he sustained two bullet wounds described as serious but not life-threatening — or his vehicle, which contained two passengers at the time. No other officers fired their guns in the exchange, though one did deploy a less-than-lethal weapon.

After fleeing the scene in the vehicle, Moon reportedly caused a crash at Fifth and V streets before taking off on foot into a greenbelt, where he was later taken into custody and booked into the Humboldt County jail on suspicion of the attempted murder of a police officer following a nearly two-week hospitalization.

Couch's body-worn camera also captured footage after the shooting and during the chase to apprehend Moon, during which Couch can be heard telling a fellow officer, "Fuck, dude. I think I shot him."

Couch was placed on paid administrative leave following the shooting but was cleared to return to full duty Jan. 7, following what EPD described as “a review of the investigation as it stands at this point, interviews and a critical incident debrief.”

EPD’s policy states that officers should only fire at a moving vehicle or its occupants if they believe “there are no other reasonable means available to avert the imminent threat of the vehicle, or if deadly force other than the vehicle is directed at the officers.” The department’s deadly force policy, meanwhile, states that “where feasible” officers should warn that deadly force may be used prior to using it, and that such force is justified when needed to protect an officer or others from what they “reasonably” believe is an imminent threat of death or serious injury, or to apprehend a “fleeing person” if the officer “reasonably believe that the person will cause death or serious bodily injury to another unless immediately apprehended. The shooting remains under investigation by the Humboldt County multi-agency Critical Incident Response Team. EPD is leading that investigation.

See the full video released by EPD below. (Warning, the video contains language and imagery some might find offensive.)