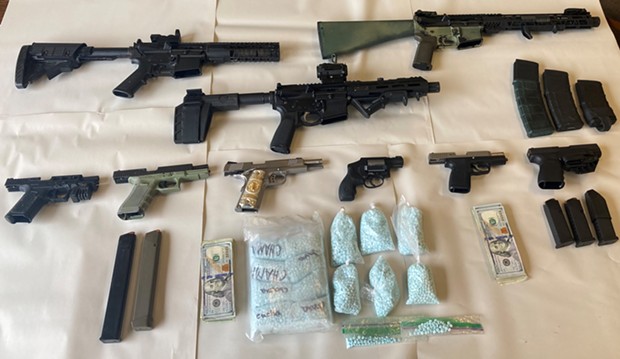 A months-long investigation led to the seizure of 15,000 “30” fentanyl pills this week, the largest bust of the powerful opioid in Humboldt County’s history, according to a news release from the Humboldt County Drug Task Force.

Three men were arrested Tuesday after drug task force agents, with the assistance of the Humboldt County Sheriff’s Office and the Eureka Police Department, served search warrants at three residences in connection with the drug trafficking  investigation.


Eureka resident James Bingham, 59, was arrested at a home on the 1300 block of Vernon Street where agents reported finding the largest stash, 12,000 pills, along with eight firearms, including three “ghost” guns.


Another Eureka resident, Richard West, 37 was arrested at a travel trailer in the Redwood Acres RV Park, where a safe was found containing another 3,000 pills and “a large amount of US currency,” the release states.


The third man, Robert Moorehead, whom the drug task force described as the “leader” of the drug trafficking organization, was arrested on 2100 block of Frederick Avenue in Arcata, where agents also reported finding a large amount of cash, a firearm and a small amount of cocaine.


The 24 year old reportedly used Bingham and West “to hold onto his pills and firearms in their residences to try and avoid detection,” according to the drug task force.

“Electronic evidence located on scene as well as statements of involved suspects confirmed that Moorehead was the leader of this DTO,” the release states


Fentanyl, a potent opioid that is 50 times stronger than heroin, accounted for 10 percent of all deaths recorded by the coroner's office in 2021. The 33 fentanyl-related deaths recorded last year were up from 11 in 2020.


Last year, the drug task force seized nearly 14 pounds of fentanyl, with an estimated value of $630,000, according to an annual report released last week.


Read the HCDTF release below:

Since September of 2021 the Humboldt County Drug Task Force (HCDTF) has been investigating a drug trafficking organization (DTO) that was distributing “M30” fentanyl pills in Humboldt County. HCDTF received information that Robert Moorehead (24 years old from Arcata) was the leader of this DTO and was utilizing other co-conspirators to hold onto his pills and firearms in their residences to try and avoid detection. Through their investigation over several months the HCDTF was able to identify James Bingham (59 years old from Eureka) and Richard West (37 years old from Eureka) as the co-conspirators of the DTO.


On Tuesday March 22nd, 2022 the HCDTF with the assistance of the Humboldt County Sheriff’s Department and Eureka Police Department served a search warrant at three locations for this DTO.


The first location was in the 1300 block of Vernon St. in Eureka. Agents detained Bingham inside this residence. During a search of this house agents located approx. 12,000 “M30” fentanyl pills as well as 8 firearms. Some of the firearms were fully automatic and had short barrels. Three of the guns were non-registered firearms (ghost guns) and one firearm had the serial number removed.


The second location was in the 2100 block of Frederick Ave. in Arcata. Agents detained Moorehead at this location without incident. Agents located one firearm, a small amount of cocaine, and a large amount of US currency in the residence.


The third location was a travel trailer in the Redwood Acres RV Park in Eureka. Agents detained West without incident. Inside the trailer agents located a safe that contained approx. 3,000 “M30” fentanyl pills and a large amount of US currency.


All three suspects were transported to the Humboldt County Jail where they were booked for the following charges:


33215 PC Possession of a short-barreled rifle


The seizure of 15,000 “M30” fentanyl pills is the largest fentanyl bust in Humboldt County history. Electronic evidence located on scene as well as statements of involved suspects confirmed that Moorehead was the leader of this DTO.


Anyone with information related to this investigation or other narcotics related crimes are encouraged to call the Humboldt County Drug Task Force at 707-267-9976.