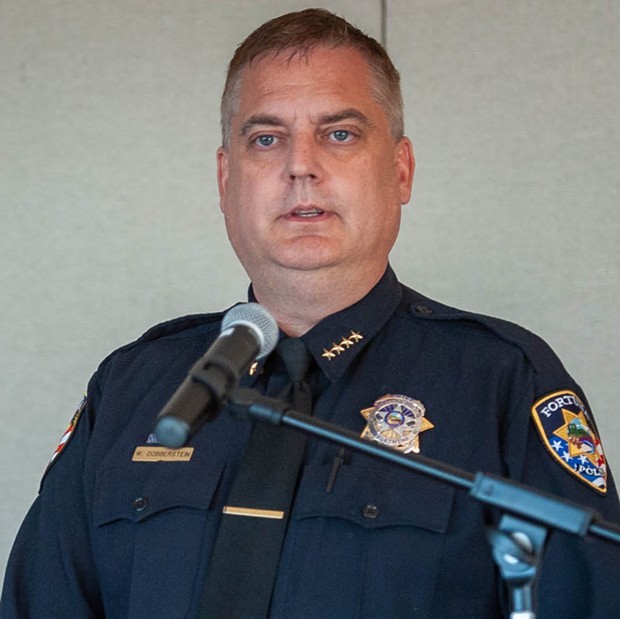 Recently retired Police Chief William Dobberstein was found dead in his Fortuna home Saturday night of an apparent suicide. He was 53.

Humboldt County Sheriff William Honsal said his department is investigating Dobberstein’s death with an autopsy scheduled later this week, but said the preliminary report is the death appears to have been a suicide.

Dobberstein retired in January of 2020 after a 25-year career, having joined the city’s police force in 1994 and been promoted to sergeant in 2011. He was considered “instrumental” in FPD’s adding a drug task force agent, a school resource officer and two detectives, while increasing the department’s community policing efforts. In addition to volunteering with the Fortuna Rotary and Veterans of Foreign Wars, Dobberstein represented FPD on the executive board of the California Police Chief’s Association.

He also served briefly as the city’s interim city manager in 2018.

At a retirement party in January of 2020, Fortuna police officers presented Dobberstein with an engraved off-duty firearm, while other local law enforcement agencies gave him a plaque thanking the outgoing chief for his work. City Manager Merritt Perry spoke at the event, saying he’d had “the pleasure” of working with Dobberstein for years.

“One of the things that stands out to me is that Bill treats everyone the same, regardless of position,” Perry said, according to an article in the Times-Standard. “He is a genuinely nice person and thinks the best of people.”

As news of Dobberstein’s death traveled through Fortuna and the greater law enforcement community on Sunday, it seemed many were having a hard time processing the former chief’s death. A handful of current or former officers took to social media to post suicide prevention hotline information or otherwise speak to the toll of the job.

“I retired from a career in 2020 that eats up your body, mind and soul,” one former officer wrote. “It then spits you out into a thousand tiny little pieces with the expectation you’ll figure out how to super glue yourself back together. … Brothers and sisters who are still in it — I’m always here and with an open ear. I get it and I’ve been there. You are loved. You are appreciated. You are wanted. Please remember that. Check on your friends. Especially the strong ones.”

The National Alliance on Mental Illness (NAMI) lists increases in alcohol and drug use, aggressive behavior, dramatic mood swings, impulsive or reckless behavior, and withdrawal from friends, family and social circles as warning sings that someone may be suicidal.

"Suicidal behaviors are a psychiatric emergency," NAMI warns, adding that if someone you know or love and worry about starts collecting or saving pills or buys a weapon, begins giving away possessions or tying up loose ends (like organizing personal papers, paying off debts, or saying goodbye to friends and family), you should seek immediate help from a health care provider or call 911.

Find the organization's full list of risk factors and tips for offering support to someone in crisis here.

The county of Humboldt maintains a 24-hour mental health crisis line at 445-7715. Additionally, a national suicide prevention lifeline can be reached at (800) 273-8255 and a crisis help text line can be reached by testing “HELP” to 741-741. Additional local, state and national resources for those in distress and their loved ones can be found here.