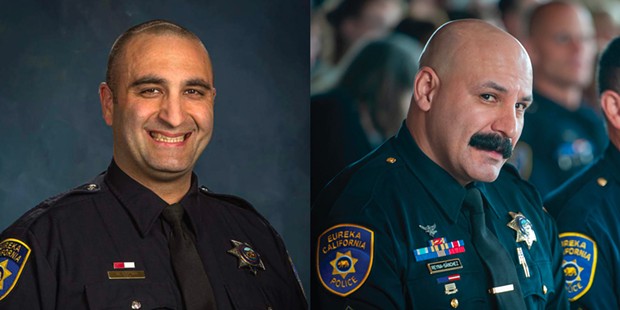 The city of Eureka’s highly publicized investigation into a unit of police officers' dehumanizing, vulgar and violent text messages that made national headlines has come to an end — not with a bang, but with a whimper.

The city issued a press release this afternoon noting that a police captain and sergeant facing pending “disciplinary action” from the department informed the city Friday they would be retiring effective immediately. Another officer who was placed on administrative leave pending the investigation terminated employment with the city on Sept. 17, per the press release. “Appropriate corrective action has been taken on all other individuals involved,” the press release states.

While the captain, sergeant and departed officer are not named in the press release, it seems clear they are former Capt. Patrick O’Neill, Sgt. Rodrigo Reyna-Sanchez and officer Mark Meftah.

Reyna-Sanchez and Meftah were the officers primarily responsible for sending text messages — first leaked to the Sacramento Bee by an anonymous source and then corroborated through a Journal public records request — that used vulgar, misogynistic and dehumanizing language to describe homeless residents and women. (Read prior reporting on the content of the messages here.)

O’Neill, one of EPD’s two captains, meanwhile, was placed on administrative leave pending an investigation in May, after the scope of the text messaging investigation was expanded to include allegations of his misconduct, as well as that of three officers, which was were unearthed in the initial investigation.

“The text messages brought to light by the article and confirmed during the independent investigation were abhorrent and are not representative of the respect that members of EPD have for our citizenry,” Interim Police Chief Todd Jarvis said in the city’s press release. “These actions fly in the face of the extensive efforts that our team has taken to ensure we address every challenge with a clear focus on human dignity, professionalism and respect for the individual.”

In the release, City Manager Miles Slattery thanked for the public for its patience throughout the “extensive investigation” as the city “weathered this storm.” He said he will be asking the city’s recently hired police auditor to conduct “a complete review and audit of the entire process surrounding this investigation and its disposition.”