Return of the Condor: Watch the Birds' Arrival Home on Live Stream

The four young condors have arrived and will spend the next few weeks with a "mentor" bird brought in to impart important social and survival skills before being sent free to soar in the North Coast's skies.

More than a century has passed since condors last soared over Yurok ancestral lands but that’s about to change very soon— as soon as next month — with today’s anticipated Humboldt County arrival of four juvenile  birds.

The moment culminates nearly two decades of effort by members of the Yurok Tribe, whose connection with the bird they call prey-go-neesh goes back to the beginning of time, with the condor considered to be among Earth's first creatures and the one that carries their prayers to the Creator.

In a recent National Public Radio interview, Yurok Wildlife Department Director Tiana Williams-Claussen, a tribal member and Harvard graduate, spoke about the importance of reestablishing the birds in the northern reaches of their former territory and how the reality “seems almost unreal.”

What she’s really looking forward to, Williams-Claussen says, is “that moment when they are just a part of our life again.” 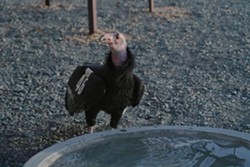 But before condors can be seen in the skies over the North Coast, this first group needs to spend some time in a release facility perched high in an area of Redwood National and State Parks with a 7-year-old “mentor” bird that is unable to be released but was brought in to help impart important social skills that the younger crew will need for life outside of captivity.

(Two of them are 2 years old and the other two are 3 years old, still youngsters for birds that don’t reach maturity until around 6 to 8 years old.)

While there, the birds will spend the next few weeks acclimating to the new surroundings, honing their condor skills and preparing to retake their spot as the region’s top scavenger.

The birds’ arrival from a Ventana Wildlife Society facility in San Simeon will be available for viewing on the Yurok Condor Live Feed, which can be found here: https://www.yuroktribe.org/yurok-condor-live-feed. (There is not an exact ETA, but it’s expected to be sometime this afternoon.)

In the protective space, the condor cohort of four will have an opportunity to test out their wings while watching others in the wild, like turkey vultures, flying on the nearby air currents — which condors can soar on for hours, traveling up to 150 miles in a day.

“The carefully designed enclosure features a large perch, a pool and a simulated power pole,” the Yurok Tribe states in a press release. “A very small amount of electricity is flowing to the mock power pole, which is a teaching tool for the young condors. When birds stand on it, they feel a slight shock to let them know to avoid the structures in the future. It does not cause pain.”

Power poles are one of many dangers the birds will face once they are released into the wild for the first time, acting as beacons of hope for their species, which still teeters on the edge of extinction.

Back in 1982, only 22 remained in a small pocket of mountainous area in Southern California. Five years later, the last of the wild condors were placed into captive breeding programs in a race against time to save the largest bird in North America.

Over the intervening years, the California Condor Recovery Program has seen many success stories, with close to 500 of the largest birds in North American now at release sites operating in California — including Big Sur and Pinnacles — as well as Arizona and Baja California, Mexico.

Decimated by settlers who poisoned and shot them, the last recorded condor sighting on the North Coast occurred around the turn of the 20th century.

But the Redwood National Park location spearheaded by the Yurok Tribe marks the condors first return to the northern reaches of its historic range, which once stretched to the Canadian border.

Each year, for the next 20 or so years, Williams-Claussen says the plan is to release additional cohorts of six or so birds to reestablish a population at this “gateway” juncture of their former territory, with the hope of an eventual expansion into the Pacific Northwest.

This first group, she notes, is “super important,” in that these young condors “are going to be the leaders of those who come after.”

Watch History Unfold in Real Time via the Yurok Condor Live Feed - On Monday afternoon, the Ventana Wildlife Society will be delivering four condors to the Northern California Condor Restoration Program’s condor release and management facility. The Yurok Tribe and Redwood National and State Parks (NPS) invite you to watch a livestream of the condors’ arrival, which can be viewed here: https://www.yuroktribe.org/yurok-condor-live-feed Viewers will see the Northern California Condor Restoration Program team release each bird into the flight pen, where they will reside and acclimatize for a few weeks. Next month, the four condors will be reintroduced to the wild. The NCCRP, a collaboration between the Yurok Tribe and Redwood National and State Parks, couldn’t be more excited that condors will soon grace the Northern California skyline after a century-long absence.

The Yurok Condor Live Feed will also offer a close-up look at the birds in the flight pen. The carefully designed enclosure features a large perch, a pool and a simulated power pole. A very small amount of electricity is flowing to the mock power pole, which is a teaching tool for the young condors. When birds stand on it, they feel a slight shock to let them know to avoid the structures in the future. It does not cause pain.

Last Friday, a seven-year-old condor was transported to the facility from The World Center for Birds of Prey. The adult bird will serve as a mentor to the two and three-year old condors, but it will remain in the flight pen. The elder or mentor bird will assist the juvenile condors in honing the skills they need survive outside of captivity. The extremely social avian scavengers learn from their elders and their own experiences.

On Monday, staff from the Yurok Tribe, Redwood National and State Parks and Ventana, as well as the Oakland Zoo, will be present at the condor facility. Apart from the day’s activities, the condors have had very few interactions with humans. From birth to reintroduction, great care is taken to limit captivity-born condors’ exposure to people. Similar to other wild animals, dependence on humans is not advantageous.

The Northern California Condor Restoration Program would like to thank the Ventana Wildlife Society for temporarily housing and transporting the birds. We are equally grateful for California State Parks assistance with setting up the live feed, so everyone will have an opportunity to watch the condors arrive. The birds will be travelling from Big Sur, so we can’t provide the exact time of their arrival. However, a few moments before the birds are placed into the flight pen, we will publish a post on this page.