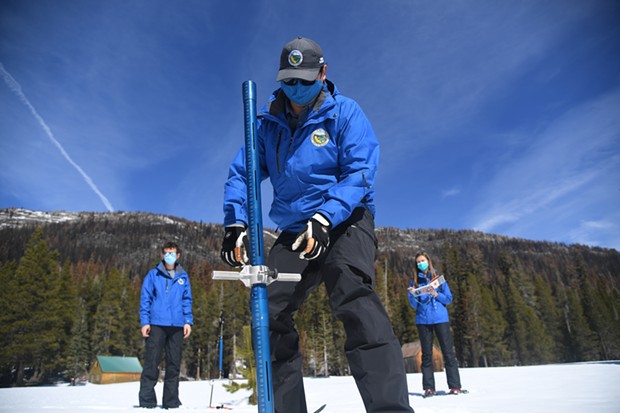 Seven years ago today, during the height of the last drought, California Gov. Jerry Brown stood on the barren slopes of the Sierra Nevada, watching as engineers measured the worst snowpack in state history.

Today, snow measurements aren’t quite so bleak. But the snowy scene belies the severity of the drought. The snowpack — which provides a third of California’s water supply — is 39 percent of average statewide.

Worse than last year, worse even than last month, this year’s snowpack is the worst it’s been in seven years, tying with 2007 for the sixth lowest April measurement in state history. It’s not as bad as the last drought, however: The snowpack contains about eight times more water than in 2015.

The amount of snow in April is considered critical because it indicates how much water will be available through the summer. The snow, historically at its deepest in April, melts and flows into rivers, streams and reservoirs that serve much of the state.

As California’s water officials discovered last year, climate change is upending their forecasts for how much melting snow the thirsty state can truly expect to refill its dwindling stores.

It’s a dismal end to a water year that began with great promise, with early storms in October and December. By Jan. 1, the plush snowpack was 160 percent of average for that date statewide, and already a little over half the seasonal total.

“Our great snowpack — the water tower of the West and the world — was looking good. We had real high hopes,” Benjamin Hatchett, an assistant research professor with the Western Regional Climate Center and Desert Research Institute, said in a recent drought presentation.

Typically, the snowpack would continue to build until April. But a record-dry January and February followed by unseasonably warm and dry conditions in March sapped the frozen stores, which by the end of the month were already melting at levels that would be expected in April or May.

Now, “we would consider this to be deep into snow drought,” Hatchett said.

Though state officials reported that early snowmelt has started to refill foothill reservoirs, the water level in massive Lake Shasta, critical to federal supplies for farms, people and endangered salmon, sits at less than half the average for this date. Lake Oroville is only slightly better, at 67 percent of its historic average.

From Andrew Schwartz’s vantage point north of Lake Tahoe at the University of California, Berkeley’s Central Sierra Snow Lab, it still looks wintry, with about three feet of snow, “plus or minus six inches,” he said.

It’s a far cry from the grassy field further south at Phillips Station where former Gov. Jerry Brown stood for the survey seven years ago.

“It’s been a false sense of security when you come up here,” Schwartz said of the snow lab. “Statewide as a whole, it’s not looking great.”

There could be a number of consequences to the early snowmelt, Schwartz said. It could result in more water loss as early snowmelt evaporates in reservoirs, disrupting the balance of mountain ecosystems and speeding the start of fire season.

“Without the snow, once things dry out, it’s just going to be catastrophic again,” Schwartz said.

California’s water supply will be determined by how much snowmelt continues to flow into major reservoirs versus how much will seep into the soil or disappear into the air. Climate change is already transforming this pattern as the weather swings between extremes, and warmer temperatures suck moisture from the soil and melt snow earlier in the year.

California’s Department of Water Resources is working to overhaul its runoff forecast calculations, an effort that has grown increasingly urgent. Last year, the state’s projections for runoff from the Sierra Nevada overshot reality by so much that water regulators were left scrambling to protect drinking water supplies and preserve enough water in storage.

Assemblymember Adam Gray, a Democrat from Merced, has called for a state audit of the calculations. “Has the state learned anything from this disaster?” he asked in a CalMatters op-ed.

The soils, for one thing, are wetter — the result of powerful October storms that soaked the state. That means more of the snowmelt may flow into rivers and streams. Generally, he said, “We expect it to be better this year.”

Still, increased runoff can’t make up for a paltry snowpack — particularly in the Northern Sierra.  The snowpack there is the lowest in the state, just 31 percent the seasonal average, compared to 42 percent and 43 percent in the Central and Southern Sierra.

Patrick sees a trend emerging in the runoff and streamflow measurements over the past three years. “One after another have been below normal,” he said.

“You can deal with one or two bad years, but when you start to get these compounding, three bad years … it’s hard to recover.”

LESSONS LEARNED: DROUGHT THEN AND NOW

A CalMatters series investigates what’s improved and what’s worsened since the last drought — and vividly portrays the impacts on California’s places and people.