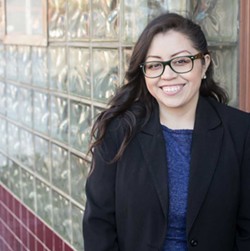 Within weeks of the Humboldt County Auditor-Controller’s Office issuing almost $12,000 in payments to a local consulting firm earlier this year, the firm’s owner, who up until December served as chair of the Humboldt County Central Democratic Committee, voted in favor of the committee’s endorsement of Auditor-Controller Karen Paz Dominguez’s re-election bid and made a non-monetary contribution to her campaign reportedly valued at $1,144.

While none of this seems to run afoul of state campaign finance or conflict of interest laws, according to a pair of government ethics experts interviewed by the Journal, an elected official granting a contract to someone with whom she has a “friendship” who then works to advance her political career does raise questions.

“It certainly has bad optics, whether it complies with the law or not,” said Michael Shires, an associate dean for the Pepperdine School of Public Policy. “The question is whether the auditor-controller followed the procedures in place for such a contract.”

Shires clarified that while there is no conflict of interest, as Paz Dominguez did not stand to personally benefit financially from the contract in any way. But, he said, the part that “looks bad is whether there’s a quid pro quo going on? Did they award the contract so they would get the endorsement and support?”

The issue first bubbled into public view during a special April 4 meeting of the Humboldt County Board of Supervisors at which the board voted unanimously to censure Paz Dominguez based on a pair of outside investigations — one launched in 2018 and the other in 2021 — that sustained allegations Paz Dominguez had engaged in retaliatory, harassing and abusive behavior with county staff. During a staff report to the board, Chair Virginia Bass asked County Administrative Officer Eilishia Hayes what kind of coaching and mentoring services the county had brought in to aid Paz Dominguez, and then followed up to ask Hayes specifically about “coaching” provided by a firm “that’s not something that went through the normal contract process.” Hayes responded that she hadn’t “been privy” to the contract in question with the firm Edge Caliber, owned by Danny Kelley, which, as the county’s purchasing agent, she said she “typically” would be.

After Bass observed it was “ironic it didn’t go through the normal contract process,” First District Supervisor Rex Bohn chimed in.

“Is that the same Danny Kelley that is head of the Democratic central committee?” he asked, prompting Bass to say she wasn’t sure that was pertinent before confirming that, yes, he’s the same person. (It’s worth noting here that Kelley stepped down from his role as chair of the committee in December but remains one of its roughly 21 voting members. Also worth noting: Paz Dominguez was appointed to fill a vacancy on said committee in December.)

The exchange prompted the Journal to file a series of California Public Records Act requests in an effort to understand the situation.

Based on documents released last week, we learned that, back in November, Assistant Auditor-Controller Amanda Loftis emailed the county’s purchasing department, saying her office wanted to hire Edge Caliber, a new vendor to the county, to provide professional services, attaching a proposed contract from the company. Purchasing Coordinator Jeff Glavich replied, saying the county’s pre-approved contract template hadn’t been used so it would need to be reviewed by county counsel. According to emails, the draft contract also did not include an end date, insurance information or a maximum dollar threshold, all of which would typically be required.

Paz Dominguez then sent the draft contract for review by county counsel, which confirmed it needed to be modified to fit the county’s approved template. This, based on emails released to the Journal, set off several weeks of back-and-forth correspondence as the document was revised.

On Dec. 28, Paz Dominguez sent her staff an email announcing the “A-C Coaching Project,” explaining that Edge Caliber would be providing a local team of coaches to provide three months of one-on-one coaching to the entire department, providing “support and assistance in a number of areas” that are not specified. According to invoices submitted to the county, Edge Caliber began work on the project Dec. 13 and continued at least through Feb. 28.

The Auditor-Controller’s office made two payments to Edge Caliber — the first Feb. 25 and the second March 18, both issued a week after receipt of the company’s invoice — totaling $11,887. In order to make the payments, the office created a vendor identification within the county’s financial software. Meanwhile, the county’s contract with the company had yet to be — and apparently still has not been — finalized and signed.

Given the use of the approved contract template and county counsel’s review, Paz Dominguez wrote in an email to the Journal that there is “no legitimate reason” for the County Administrative Office and Purchasing not to approve it. Emails released by the county, however, indicate that as of last month, purchasing was still looking for both a certificate of insurance and a copy of the contract that had been signed by Kelley on behalf of Edge Caliber. The last correspondence provided about the contract that included Edge Caliber was a March 14 email from the Auditor-Controller’s Office to Kelley asking him to sign and return the document, after which it would be signed by county counsel.

Per the county’s purchasing policy, contracts for professional services must be approved by county counsel and risk management, and signed by the purchasing agent (the county administrative officer) or their designee, or approved by the board of supervisors. In an April 26 email exchange about the still unsigned contract, Hayes indicated she wanted it to come before the board of supervisors, though it has yet to do so, at least in open session.

Reached by email Monday, Deputy County Administrative Officer Sean Quincey declined answer whether the contract had or would go to the board for approval, saying: “This contract is still being evaluated and no further comment will be provided at this time.”

Asked whether this contract has followed “normal” policy, Paz Dominguez said she wasn’t sure how the Journal was defining the word “because we are often asked to issue payments outside of the standard policy and we consider those requests on a case-by-case basis.” Further, she said, her office hadn’t entered into a contract with a new vendor in several years prior to working with Kelley’s company.

Asked to address concerns that this process seemed to lack the internal fiscal controls that she has been vocal in demanding of other departments, Paz Dominguez said there were multiple checks and balances. She said the work proposal was reviewed by the assistant auditor-controller and county counsel; the contract proposal was then run by the purchasing division and, based on its recommendation, county counsel, and subsequently redrafted based on their legal advice; invoices were then reviewed by the assistant auditor-controller to confirm “stated services were performed and completed or in progress;” after which Paz Dominguez created a vendor profile for Edge Caliber within the county’s financial software and processed the payments.

Whether those steps represent sufficient internal controls, the issues surrounding the county making vendor payments without a valid contract in place echo some of Paz Dominguez’s own criticisms of the county’s fiscal operations. While airing a long list of “findings” from her ongoing “review” of the county’s finances March 1 in response to a letter sent from the state Attorney General’s Office threatening to sue her personally over delinquent county financial reports, Paz Dominguez listed departments making payments without valid contracts in place as one of many perceived “opportunities for fraud” within the county’s financial system.

Later asked for documentation to support her findings, Paz Dominguez released emails illustrating how her office took the Department of Health and Human Services to task for submitting an invoice tied to an expired contract with a local pharmacy. That invoice — for $55, which was ultimately paid with approval from the CAO’s Office — appears to be part of what prompted Paz Dominguez to help craft a letter-of-intent template that allows departments to begin paying vendors for services even as the fine print of a contract is being finalized. These letters outline the basic terms of the agreement and are signed off on by the parties involved and filed with the necessary tax and insurance information needed to begin paying a vendor.

But based on the records provided the Journal, it does not appear a letter of intent was ever filed for Edge Caliber.

The county’s purchasing policy, meanwhile, includes a section on ethics. It states that all purchases should be made to “obtain the maximum value for each dollar of expenditure” in ways that “encourage fair and open competition” and are free from “any conflict of interest.” Further, those making purchasing decisions should be “free from any personal obligations to vendors.”

Because this proposal did not go through a competitive bid process, there was no open competition for the services provided to the Auditor-Controller’s Office by Edge Caliber and it’s unclear whether the company provided the county “maximum value” for the money spent.

But the experts consulted by the Journal said there is also clearly no legal conflict of interest.

Bob Stearns, a principal co-author of the Political Reform Act that voters passed as Proposition 9 in 1974, creating the state law on the subject, said conflict of interest laws have an exemption in place for campaign contributions, which the U.S. Supreme Court has ruled are a form of political speech.

It’s also important to note that while Paz Dominguez disclosed it as a non-monetary contribution — in an effort to be “transparent” and “promote public trust,” she said — Kelley’s donation to her campaign does not fit the Fair Political Practices Commission definition of a contribution. Because Kelley just volunteered his own services to help with “website and database setup” — rather than gifting the services of his company and its employees, or “tangible items” — it qualifies as simple volunteering and therefore doesn’t require reporting, per the FPPC.

It also seems unlikely that Kelley single-handedly swayed the Humboldt County Central Democratic Committee’s endorsement vote. Current HCCDC Chair Mario Fernandez told the Journal that 17 committee members voted to endorse Paz Dominguez, with one abstention, three “no-endorsement” votes and not a single vote cast for Cheryl Dillingham, Paz Dominguez’s opponent in the upcoming election. (It’s also worth noting that Paz Dominguez, in an email to the Journal, said her “friendship” with Kelley is significant enough that they agreed it was “appropriate” she work with a different coach from Kelley’s company for the A-C Coaching Project, making it seem unlikely the government contract somehow was the deciding factor in Kelley’s decision to support Paz Dominguez’s endorsement.)

Nonetheless, Fernandez said the HCCDC plans to look at its endorsement policies after the election to see if further safeguards should be put in place moving forward.

“I’m assured and I feel there wasn’t anything improper that took place,” Fernandez said. “But what it comes down to is that look — that veneer — of possible impropriety isn’t anything we want in politics.”

Stearns similarly said the appearance of potential impropriety can be damaging in itself, potentially undermining public trust and lending opposing campaigns political ammunition. Such situations, he said, can “create an appearance in the public that someone is being influenced by campaign contributions,” adding that if he were advising a campaign, he’d urge the candidate not to take any contributions from anyone with whom they do business in their official, elected capacity.

Meanwhile, Shires, the Pepperdine associate dean, said the situation raises the specter of a possible quid pro quo, whether a vendor friendly to an elected official may have gotten a government contract in exchange for help with a key endorsement and a campaign contribution.

“The optics are certainly bad and, in that office, it’s even worse,” Shires said. “Certainly, in the role of auditor-controller, where you’re handling the people’s money, you would want to be above reproach and do things in a way that appears as a clean as possible.”