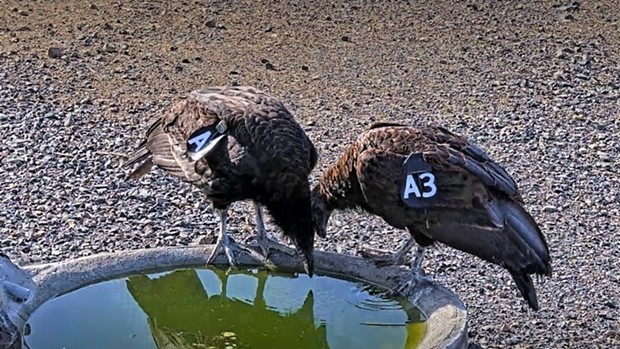 The Northern California Condor Restoration Program is readying to send a third condor out into the wilds of Humboldt County on Wednesday to join two others — A2 and A3 — that took their first foray earlier this month.

A change in the weather forecast is delaying the previous plan to go forward on Tuesday.

The release of A0 — which will be live streamed —  marks the first flight of a female condor in the region in more than a century. But first, the bird has to cooperate by entering a smaller pen next to the main enclosure that has a door to the outside, a process successfully navigated by A2 and A3 on May 3.


After leaving first, A3 was nicknamed "Poy’-we-son," which the Yurok Tribe said translates to "the one who goes ahead, but also harks back to the traditional name for a headman of a village, who helps lead and guide the village in a good way,” while A2’s nickname, "Nes-kwe-chokw,’" translates to “He returns” or “He arrives."


The last of the young condors is expected to be let out sometime next month.


The staggered release allows the NCCRP team — a partnership between the Yurok Tribe and Redwood National and State Parks — to monitor how the condors are adjusting to their new surroundings while also helping to keep those flying free coming back, with the birds in the enclosure providing a “social draw.”

That has been the case for A2 and A3, which can sometimes be seen preening the others still inside through the wire fencing or seeming to exchange fallen feathers.

But while A2 stuck relatively close to home these last few weeks, hanging out in an open but fenced area adjacent to the large coop where staff continue to put out carrion for feedings, A3 took off on a two -week sojourn that included a stop at Klamath River before finally returning last week.

A0’s release will mark another milestone for the effort led by the Yurok Tribe over the last 15 years to bring back the bird they know as prey-go-neesh to the northern reaches of its former territory, which included extensive planning, outreach and research.

Until now, the last condor sighting on the North Coast was in 1892 after decades of decimation by settlers, who shot and poisoned the birds considered sacred in Yurok tradition.


The release can be viewed here.