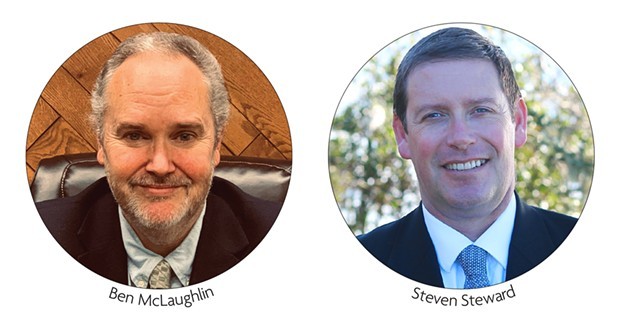 FOURTH REPORT:
Deputy District Attorney Steven Steward continues to build on his commanding lead, having now taken 58 percent of the 11,533 ballots counted in the race so far, with Deputy Public Defender Ben McLaughlin trailing with 42 percent of the vote.

THIRD REPORT:
Steven Steward remains in the lead for the Humboldt County Superior Court Judge seat, with 58 percent of the 11,533 votes counted, while McLaughlin has 42 percent.

SECOND REPORT:
With only 332 more votes since the last election night report, Steven Steward continues to lead the race for Humboldt County Superior Court judge, with 58 percent of the 11,048 votes counted so far. Ben McLaughlin, meanwhile, has 41 percent.

In the first Election Night return, which is comprised of ballots that arrived at the Humboldt County Elections office before today, Steward took 58 percent, while Ben McLaughlin took 41 percent, with 10,716 ballots counted in the race so far.

McLaughlin and Steward are vying for the seat in what's just Humboldt County's second contested judicial election in the last 20 years.

Humboldt County Superior Court judges, who serve six-year terms, hold an immense amount of discretion in their courtrooms, overseeing both civil and criminal cases. In civil cases — which include family law proceedings, probate cases, petitions for court orders and claims — a judge's decision can determine whether a family stays together, how an estate is dispersed, what records are determined to be open to public view and who's at fault in a given dispute. In criminal cases — which include felonies, misdemeanors and infractions, like traffic tickets — judges determine whether there is enough evidence to support a charge, what evidence will be admissible at trial, how a jury will be instructed on the law and, ultimately, what constitutes a just sentence for those found guilty.

Both candidates have backgrounds in criminal law and have spent time prosecuting serious and violent crimes.

McLaughlin, who grew up in Palo Alto and has lived in Humboldt County for 15 years, has focused the last 17 years of his career on criminal law and served seven of those years as a deputy district attorney and five as a deputy public defender in Del Norte and Humboldt counties. He graduated from Vanderbilt University as a history major with an emphasis in Latin American history in 1994 before receiving his law degree from Santa Clara University School of Law in 1999. He spent a short time in civil litigation before focusing on criminal law.

Steward, who grew up in Los Angeles and moved back to Humboldt County after graduating from Humboldt State University (now Cal Poly Humboldt) in 1998, has worked as a Humboldt County deputy district attorney since 2017,  serving as the office's lead environmental crimes prosecutor. He earned majored in political science at HSU before attending graduate school at San Francisco State University. Steward then moved to Washington, D.C., where he worked for a member of Congress before attending law school at The Catholic University's Columbus School of Law, while working to provide legal services to indigent clients at a domestic violence clinic. After getting his law degree he returned to California and spent seven years representing low-income defendants in criminal courts in Los Angeles and the Bay Area.