Thomas Lal Crabs infielders Aaron Perez and Kevin Fitzer celebrate after the Crabs take a win over the Seattle Studs on June 16.

It was a busy week of action at the ballpark for the Humboldt Crabs as they played six games including a four-game series against the Seattle Studs which started with a rare Thursday game and was wrapped up with packed Father’s Day bleachers.


The week started with a two game series against the Yuba-Sutter Gold Sox. Tuesday saw only the second loss of the young season for the Crabs as they struggled to find their offense though much of the game. The Gold Sox struck in the first inning with a double to score a run which gave them a lead that they wouldn’t part with for the rest of the game. As the Gold Sox put up four more runs over the game, the Crabs would have to wait until the ninth inning to tally a run, rallying for three to fight back but just coming up short and losing 5-3. 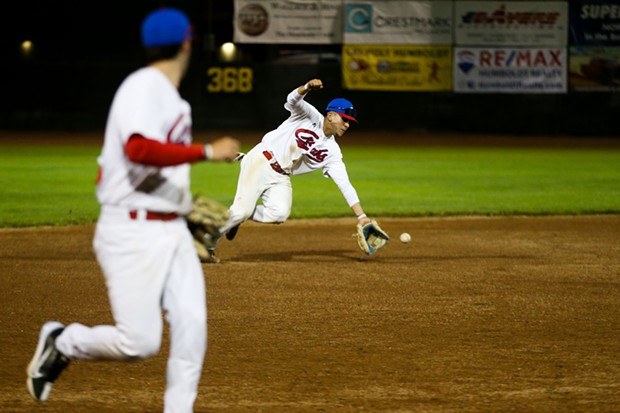 Wednesday’s game was another close one that was ultimately decided by two runs. Fairly even offensive output from both teams saw both score five runs in the first four innings. After the opening offensive flurry, however, the pitchers took control of the game. Relief pitchers Kelan Scanlan and Nick Perryman worked a combined five innings and gave up only two hits while striking out seven batters, keeping the crowd on the edge of their seats all the way to the bottom of the eighth inning.


With the tie breaking runner Nick Salas on first base courtesy of a walk, center fielder Marcus Wolbert stepped into the batters-box knowing he had a job to do and he delivered. With one swing of the bat, Wolbert gave the Crabs the shock of offense they had been looking for since the fifth inning as he fired a home run over the right field fences to give the Crabs the lead that Scanlan the defense would ensure they kept on the way to a 7-5 victory. 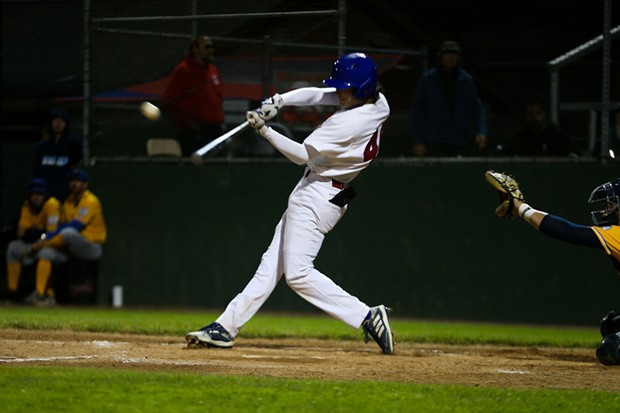 There was little rest between games as Seattle came to town the next day to kick things off for their four game series. The Crabs trailed the Studs until the fifth inning where they tied the game at 4-4 off of a wild pitch after Salas stole second and advanced to third on an earlier wild pitch from Studs pitcher Noah Miller. It would only take one more inning before the Crabs took the lead for themselves as Designated Hitter Jordan Petrushka hit a triple to score Kevin Fitzer. Relief pitchers Andrew LaCour and Cameron Saso followed Caleb Ruiz’s start and shut down the Studs giving the Crabs a 7-4 win.


Where close games had been a theme of the week up to game two against the Studs, Friday’s game saw the widest scoring margin of the season so far as the Crabs racked up 22 runs while allowing just one to rout the opposition. The score was a combination of a Studs bullpen that seemed off balance and shaky, including a third inning where Seattle pitchers walked four runners and hit two Crabs batters, and the Crabs hitters fully taking advantage of the opportunities that were presented to them. There was no better example of this on the night than First Baseman Javier Felix who had four hits on Friday night and seven in total over the three games he played against the Studs. The offensive performance form the also skilled infielder saw him skyrocket to the top of the team’s batting averages, hitting .520 after the weekend.

“I just see it and hit it,” Felix said after Sunday’s game. “I try not to do too much thinking. The moment I do, thinking is no bueno for me.”


The simple mindset has paid dividends for the junior out of Cabrillo College in the batters-box and he has proven that he’s also comfortable playing at all points of the infield.


“It’s been fun,” Felix said. “It’s exciting to have all the guys around us that can move around. A lot of pieces …. Just fun being able to play every position really, you know? It’s like you’re a kid again. And with all that flexibility comes a lot of responsibility as well because you’ve got to be ready for just about anything that comes your way.”


It was another win for the Crabs as they took the series and the game on Saturday with a 8-4 victory over the Studs behind starting pitcher Merek Sears, who gave up just two hits and one run in six innings of work. Felix and Designated Hitter Tyler Davis blew open what was a tight scoring game with a grand slam and a three-run home run respectively in fourth and fifth innings.

The final game of the series was also the first Sunday day game of the season after rain canceled the first two Sundays of the season. It was a full house for Father's Day and the Crabs and Studs put on a low scoring battle for the crowd to watch. Where pitching had been a major issue for the Studs on Friday, they ran out Andrew Brady to close the series and the Crabs lineup couldn't figure out the Seattle pitcher. The Studs put up three runs early in the game and the Crabs chased for all of it, working walks and battling through at-bats but not able to scratch a run across until the eighth inning when Felix knocked in second baseman Mario DeMera after a leadoff single. The Crabs managed to score another run in the ninth inning to close the gap down to one run and loaded the bases just coming up short and dropping the final game 3-2, bringing their overall record so far to 8-3.

After Sunday’s game, Crabs Manager Robin Guiver was still in good spirits despite the loss after taking the series and looking at the way the team has played so far to start the season.


“It’s a great group of guys,” Guiver said. “They’re happy, they’re having fun, a lot of smiles all around even after a disappointing loss. Still taking three of four from the Studs, I’ll consider that a successful weekend for sure. Good group of dudes playing a tough schedule this summer, there’s going to be some ups and downs and it’s going to be a fun summer of baseball.”


Guiver also had praise for Scanlan, after the relief pitcher worked his way out of multiple innings with runners on base without surrendering a run to keep the Crabs in the hunt during Sunday’s game.


“I went out for a mound visit with bases loaded and no outs,” Guiver said. “Just trying to keep minimum damage and keep it at one run or two runs, and he goes, ‘I’m getting out of this nothing’ and he did! He got a line drive to shortstop and then a perfect double play ball to end the inning and kept us right in it so that was cool.”


The Crabs will hit the road this week for a rematch against the Gold Sox at Colusa Casino Stadium and then facing the Lincoln Potters for the weekend series at McBean Stadium.