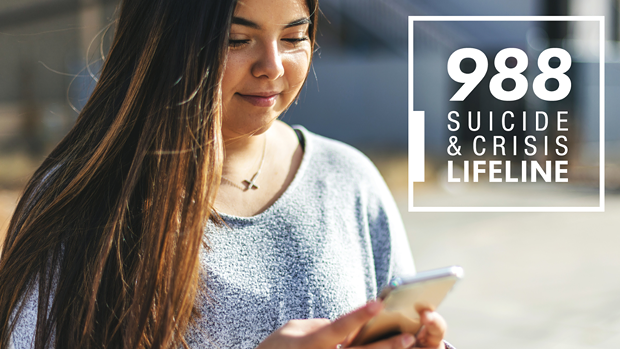 The national 988 hotline launched over the weekend, giving those experiencing or witnessing a mental health crisis just three numbers to dial to be connected with intervention services without being routed through a police dispatcher.

The new number, which takes the place of the suicide prevention hotline, is part of a national effort to overhaul the delivery of mental healthcare and, as much as possible, keep police out of mental health crisis response. But it’s a baby step.

For now, calls and texts that come into the 988 number will be routed to state suicide prevention call centers, including about a dozen in California. Calls placed in Humboldt County will be routed to a state call center in Yolo County and, from there, redirected to the county’s 24-hour crisis line: 445-7715, or toll free at (888) 849-5728. (For the time being, these numbers remain the most direct line to the local experts waiting to help, but 988 provides an easy-to-remember alternative.)

Humboldt County Behavioral Health Deputy Director Paul Bugnacki said only about 2 percent of hotline calls statewide are transferred for an emergency response, and state officials have expressed hope 988 could reduce the number of mental health crisis calls coming into emergency dispatch centers. The new hotline won’t change much on the ground in Humboldt County, Bugnacki said, though he said he may look to add a position to the county’s crisis stabilization unit, depending on call volume.

Meanwhile, local agencies and the county continue to work toward the larger vision of having trained mental health clinician teams ready to respond directly to emergencies without police, where possible.

County Behavioral Health is currently working with the Eureka Police Department, the Arcata Police Department and the Humboldt County Sheriff’s Office, to have mental health teams co-respond to certain calls — or work certain beats — along with sworn officers. Bugnacki said teams are also in place that dispatch to local hospitals when police bring someone in on a mental health hold to evaluate whether the person meets legal criteria for the hold or could possibly be treated or monitored in a less restrictive setting.

Eureka, meanwhile, seems to be the local entity closest to implementing 988’s architects’ full vision of providing an emergency mental health response that does not involve police at all.

Eureka City Manager Miles Slattery said the program has been more than a year in the making but the city has hired a mental health clinician who is slated to start Aug. 1. The clinician will lead a small team operating out of a city-owned van that will respond directly to mental health related calls for service, though Slattery said it’s still being worked out whether those calls would come through police dispatch, 988 or some combination.

A lot of the specifics of exactly how the program will work — including who will be hired to staff it with funds already allocated by the city council — will be figured out in coordination with the clinician, Slattery said, adding the city wants them to really take the lead on building out the response apparatus.

“The intent, though, is for us to be way more proactive,” Slattery said.

Bugnacki, meanwhile, said while Humboldt County is ahead of many jurisdictions as far as forming partnerships between mental health professionals and law enforcement, he’s constantly looking for ways to expand those services. Funding streams are beginning to open up, he said, but the biggest challenge is finding trained professionals to send out in the field, saying clinicians, case managers and peer coaches are in demand.

“The money is there, the partners are there — we just don’t have the workforce,” he said.

But 988 is a big step for the nation, he said, noting that it — as well as a bill working through the state Legislature currently that would add an annual cell phone account fee to help fund mental health response services — are signs that the state and nation are starting “to focus more on mental health.”