The complex, which initially comprised 12 fires sparked by lightning before dawn on Aug. 5, includes eight active fires that have now ballooned in size to more than 3,180 acres with zero-percent containment, according to the U.S. Forest Service. 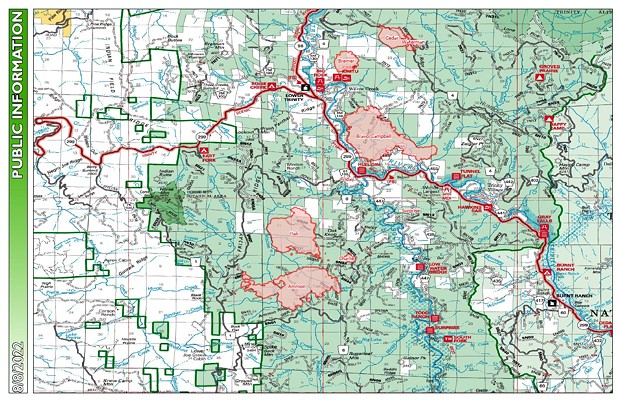 "This is a full suppression fire," the U.S. Forest Service, which is managing the response, said in a press release. "Firefighters will aggressively fight fire whenever it is safe to do so."
Today's efforts will see fire crews work to keep the fire west of Lone Pine, south of Horse Linto Creek, east of Brannan Ridge and north of Ammon Ridge, the agency reports, warning that conditions on the ground make the type of "extreme fire behavior" seen over the weekend very possible.

"Last year's snow event left a lot of trees dead and down on the ground," the agency reported in a press release. "If ignited, these can result in fire behavior that is more substantial than what would usually be anticipated this time of year."

State routes 299 and 96 remain open, according to CalTrans, though fire conditions may necessitate closures.

An inversion layer and relatively high humidity are expected to moderate fire activity until this afternoon, when the inversion layer is expected to break, humidity will decrease and temperatures will increase, with winds forecast at 5 to 10 mph out of the north and gusts of up to 15 mph.

The North Coast Air Quality Management District has issued an advisory for areas in and around Willow Creek, saying smoke will render air quality unhealthy to very unhealthy, with "hazardous" periods possible.

Editor's note: A prior version of this story included an incorrect acreage estimate for the Six Rivers Lightning Complex due to incorrect information released to the Journal. The Journal regrets the error.