About 100 residents from the Willow Creek area crammed into a small church on State Route 96 on Monday, where billows of smoke could be seen from a large, pane glass window spiraling into the sky across the Trinity River from the Bremer Fire as it continued to encroach on Willow Creek’s eastern edge. They were there for their first chance to hear directly from U.S. Forest Service fire officials since a brief pre-dawn storm on Aug. 5 brought an estimated 150 lightning strikes to the region, at least 10 of them sparking blazes in Six Rivers National Forest that have become known collectively as the Six Rivers Lightning Complex.

If the officials sought to drive home one point during the meeting it was that help was on the way, that the cavalry was coming.

“We have resources on order and we are the No. 1 priority in the state and the nation,” said California Interagency Instant Management Team 11 Operations Section Chief Seth Mitchell, drawing a round of applause from the gathered residents, many of whom had been evacuated from their homes over the weekend, and later adding that while 600 personnel are currently on the ground, “We have a whole bunch of stuff en route.”

And true to Mitchell’s word, caravans of hot shot crews from all over the state and beyond could be seen a few hours later, heading east from the coast on State Route 299 and west from Redding, ready to join the fight.

North of Willow Creek, there are the Bremer and Cedar/Waterman fires, with the Bremer Fire burning down-slope toward Willow Creek’s eastern edge and the Bigfoot subdivision, and the Cedar/Waterman Fire potentially threatening Hoopa to the north. South of Willow Creek, there’s the Bravo-Campbell Fire, which is burning to the southeast, threatening a number of small communities along State Route 299, including Salyer and Hawkins Bar. Farther south, there are the Oak and Ammon fires, which are expected to burn together any time and threaten communities along Friday Ridge and Route 1. As of 11:30 a.m. on Aug. 9, the fires had combined to scorch nearly 9,000 acres, with zero percent containment. 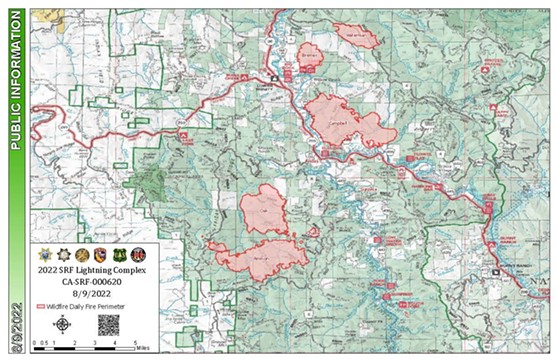 All are burning in dense forested areas that are not only parched with drought but also filled with downed fuels after the December snow storm that felled scores of trees across the region. While CalTrans has worked for months to clear downed trees from along State Route 299, PG&E has cleared land under its transmission lines, many of the fuels left elsewhere by the storm remained to be dried by an unusually dry and warm winter and spring.

Back in May, officials with the Lower Trinity River Prescribed Burn Association, the Trinity County Resource Conservation District and the nonprofit EcoFlight took a handful of locals (including the Journal) an an aerial tour of the burn scars from last year’s Knob and Monument Fires. During the flight, the associations Basho Parks and the district’s Heidi Carpenter-Harris pointed out that while prior conditions caused the Knob and Monument fires to burn so hot they scorched the earth below the forest in certain places, the winter snow storm had made things considerably worse heading into this year’s fire season.

As the fires grew rapidly amid these conditions over the weekend, exhibiting what officials dubbed “extreme fire behavior,” the U.S. Forest Service and local departments scrambled to respond with limited resources. Fire crews were able to save a string of residences along Seeley McIntosh/Campbell Ridge Road and Salyer Heights, while others slowed the Bremer Fire’s encroachment on the Bigfoot subdivision on Willow Creek’s eastern edge.

Residents, meanwhile, scrambled to heed evacuation orders and get out. The Red Cross set up an evacuation center at Trinity Valley Elementary School (730 State Route 96), the Hoopa Rodeo Grounds opened as an evacuation center for large animals and a variety of locals sprang into action with trailers and trucks to help get people, their pets and livestock out of harm’s way. Social media message boards filled with prayers for neighbors and expressions of angst as people left their homes, unsure whether they’d ever see them again.

“My life will change forever,” one resident posted to Facebook with a photo of a vehicle leaving a gate under a hazy sky with an orange glow. “I don’t know if this beautiful gate still stands tomorrow. My tears streaming down right now, my heart hurts. I’m not able to save all of my animals. Praying for my house, praying for my animals, praying for my neighbors.” 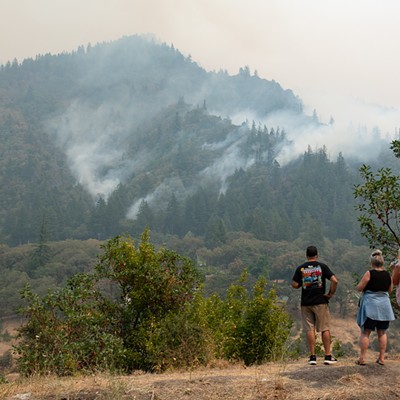 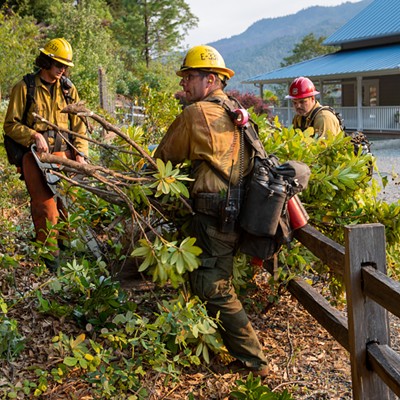 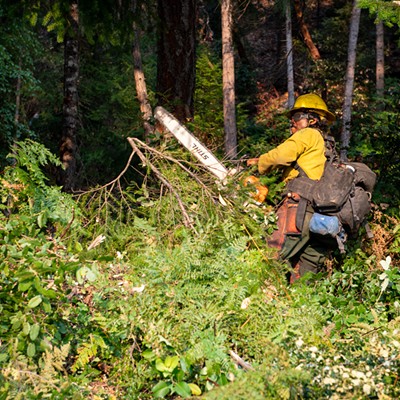 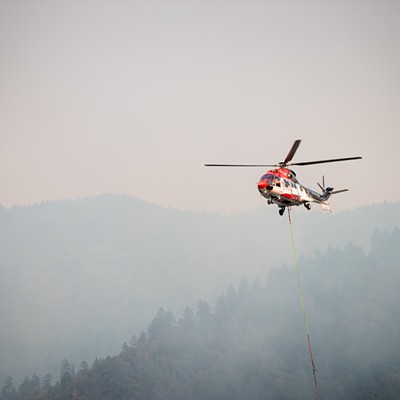 Six Rivers Lightning Complex Aug. 8
By Thadeus Greenson and Mark McKenna
Click to View 24 slides
On the Willow Creek Bulletin Facebook page, residents posted about finding lost dogs and, in one case, shortly after 7 a.m. Aug. 8, a long-horned goat wondering Brannan Mountain Road with a harness and leash that seemed “friendly.” (Within about 20 minutes, someone had connected the poster with the goat’s owner, who’d been worried since losing track of it the night before.)

Back at the Aug. 8 community meeting, U.S. Forest Service Fuels Technician Kevin Osborne advised that relatively mild weather and morning inversion layers had helped keep a bit of a lid on the blazes over the prior couple of days. In the early afternoons, when the inversion layer lifts, temperatures rise and humidity levels fall, the fires were becoming more active, but he said the weather was fairly stable and, “luckily, there aren’t extreme weather events forecast.” He said crews were working hard to take advantage of the relatively mild morning fire activity to get ground work done and prepare defense lines, preparing for fire activity to ramp up.

CalFire Humboldt-Del Norte Chief Kurt McCray, who took over unified command Aug. 9 with federal and local officials, praised the U.S. Forest Service’s initial response, which, as of the meeting, had not seen a single injury or structure lost. But McCray made clear a long road lies ahead.

“This is going to be a long battle and all of you need to do your best to be prepared and informed, and to heed the evacuation orders when they come,” he said.

Trinity County Sheriff Tim Saxon underscored that last point, telling residents: “If you choose to stay, you’re on your own — and I mean, on your own,” while urging anyone who makes that decision to be sure they have “adequate supplies.”

Humboldt County Sheriff William Honsal told gathered residents he hears “their anxiety” and sees the adversity they are facing. Humboldt County Fifth District Supervisor Steve Madrone told the Journal those anxieties extend beyond people’s residences to their livelihoods in some cases, noting that he’s heard from cannabis farmers in evacuation zones who left light-dep crops ready to harvest, amid what has already been a financially disastrous stretch for the industry.

“People’s livelihoods are on the line,” he said.

Trying to reassure residents, Honsal said his deputies continue to patrol evacuation zones to look for potential looters, saying, “We have lots of eyes and ears out there.” He urged people to stay informed about current conditions and their evacuation zones, and to stay together.

The nonprofit Pay it Forward Humboldt urged anyone willing to volunteer to contact them, saying its looking to coordinate supply deliveries and other services to help those displaced and those still at home amid evacuation and air quality warnings. On a table in the back of the room, the group had already stacked N95 masks and boxes of peaches from upriver at Suzy Q farm. The farm had harvested the peaches looking to donate them but, under an evacuation warning, couldn’t deliver them, so someone from Pay it Forward volunteered to pick them up.

As the meeting wound down, McArthur assured fire crews will do everything they can.

“This has been quite a hand we’ve been dealt — there were a lot of lightning strikes,” he said. “It’s created an environment that’s very difficult for our firefighters, but they’re giving it all they can.”

Thadeus Greenson (he/him) is the news editor at the Journal. Reach him at 442-1400, extension 321, or thad@northcoastjournal.com. Follow him on Twitter @thadeusgreenson.