Meet the New Condor Cohort: Introducing A4, A5, A6 and A7 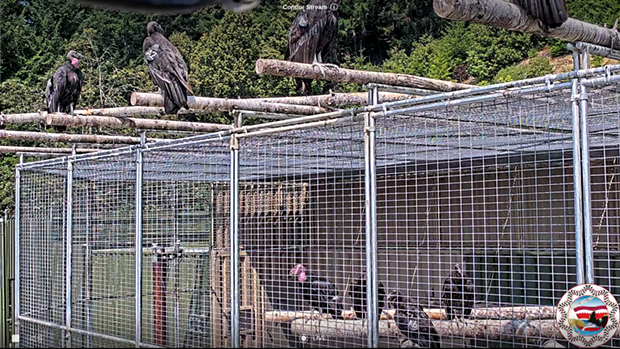 Mentor bird No. 746 is no longer alone in the enclosure at the management and release facility in Redwood National Park with a new group of young birds arriving today for him to teach the ins and outs of what it means to be a California condor.


“We are extremely excited to receive the second condor cohort. I can’t wait to see all eight condors flying free over Yurok Country,” Tiana Williams-Claussen, the director of the Yurok Tribe’s Wildlife Department, said in a Facebook post. “The first group of birds are adjusting well to their new home in the redwood region.”

This new group of three males and one female are expected to be set free to fly in the wild in staggered releases between mid-September and mid-October, just like the four others now soaring in the skies over Humboldt County, as part of a Yurok Tribe-led effort to return the endangered bird they know as prey-go-neesh to the northern reaches of its former territory.


Known as the Northern California Condor Restoration Program, the effort is a partnership between the Yurok Tribe and Redwood National and State Parks, which plans to reintroduce one cohort of prey-go-neesh every year for at least the next two decades.


"Monitored seven days a week, the young condors are flourishing in the redwood region," the Yurok Tribe stated in a recent Facebook post about the group now flying free. "The birds consistently exhibit healthy behaviors, such as feeding, soaring, and finding safe roosts."


Read more about the condor restoration program in the Journal's June 23 cover story here and on the  Yurok Tribe website here. (Just a note, when the story went to print A0 had been on a long sojourn but she later returned to the management and release site.)