August 20, 2022
2 comments
The fog gave way to the sun late morning on Friday, Aug. 19, as dozens of people gathered around the podium positioned in the meadow. Spruce trees and huckleberry bushes stood in the near distance as the scent of saltwater and highway traffic drifted up from the bay and road below. Tribal Chair Ted Hernandez called for the elders to sit as they began the ceremony to mark the reclaiming of Mouralherwaqh — “wolf’s house” — by the Wiyot Tribe. When open chairs remained, former chairwoman Cheryl Seidner teased, “I see some white-hairs out there!”

The tribe worked with local partners at Cal Poly Humboldt, Humboldt Baykeeper and Friends of the Dunes to secure a $1.2 million grant from the state Ocean Protection Council (OPC), enabling the Wiyot to purchase 46 acres of land from a private property owner. Plans for the site include environmental restoration and building resilience to sea level rise. It’s a historic first in terms of the state funding ancestral tribal land return to address climate change. But the story began in the mid-1800s, when settler-colonialism and land theft left the Wiyot Tribe with less than 1 percent of its ancestral territory.

In 2015, while mapping culturally important plants as part of a Bureau of Indian Affairs (BIA) Geospatial Program grant, staff at the the site in King Salmon at the bottom of Humboldt Hill identified numerous important species. When the parcel went up for sale in 2021, the tribe set to work on re-acquiring Mouralherwaqh (pronounced "more-RAH-share-wahg") by developing a collaboration and proposal to make the acquisition possible through OPC’s Proposition 1 grant program.

The program funds coastal projects that benefit environmental justice communities and improve water quality. The path to successfully receiving funding arose through the Cal Poly Humboldt Sea Level Rise Institute, which is co-chaired by Natural Resource Director for the Wiyot Tribe Adam Canter and Cal Poly Humboldt Environmental Science and Management Professor Laurie Richmond. The reclaimed property provides the tribe with the opportunity to clean up degraded waterways and wetlands, and to utilize natural ecosystems (aka “nature-based”) for sea level rise resilience measures.

In the process of developing a climate change adaptation plan, Wiyot staff learned a common concern among tribal members is the potential loss of access to culturally important habitats — the need to conserve upland areas is ever more important as rising seas will flood low-lying areas around Wigi (Humboldt Bay) including Tuluwat, the site of an earlier historical reclamation by the tribe. In an episode of the EcoNews Report,  Canter points out that because Mouralherwaqh, the first forestland to be returned to the tribe, has both low-lying and upland habitat. “It’s a great opportunity for the tribe to really contribute to nature-based solutions by stewarding this property to allow for the migration of sea level rise and habitats inland.”

Speakers at Friday’s event similarly emphasized looking at what the future could hold.

Cutcha Risling-Baldy, department chair of Native American Studies and co-director of the Food Sovereignty Lab at Cal Poly Humboldt, noted that the school’s commitment to “uplift and support” opportunities for Indigenous tribes is unique among universities. “Land-back is a really powerful thing,” she said. “We are going to build what the next world is going to look like.”

Seidner marked the occasion with a “coming home” song, pausing to invite attendees to sing along and aid the healing of the land. As the final note dissipated into the air, a heron launched through the sky above, adding its throaty croak to the mix. 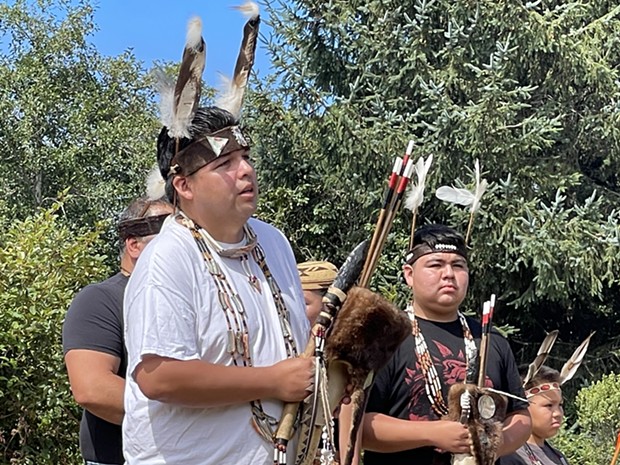 The healing theme continued as William Frank IV led several mostly young Wiyot outfitted in ceremonial regalia in a brush dance. After a “heavy dance” and a moment of silence for the people lost to the COVID-19 pandemic, a lighter mood prevailed with Frank and Hernandez bantering between dances.

A prototype for the future

With that, the attention turned to state representatives. The reclaiming of Mouralherwaqh is the first time that California has funded tribal acquisition of ancestral lands as a part of addressing climate change. In a press release about the project, Canter expressed hope it can serve as a model for how tribes, academia and non-governmental organizations can work with state agencies to facilitate the return of Indigenous lands to their original stewards. Such efforts, he said, benefit the environment and climate, “while also providing access to nature and environmental justice to the communities that have been historically excluded by settler-colonialism and the structures of privilege that they perpetuated.”

Speaking at the celebration, California Natural Resource Agency (CNRA) Assistant Secretary for Tribal Affairs Geneva E. B. Thompson supported that hope, highlighting the organization’s shift toward better acknowledging indigenous stewardship across the state. “The attempted genocide not only affected people,” she said, “but also the plants and animals …. We are all suffering from that now.” Ancestral land return is a key component of environmental stewardship, Thompson continued, and one the state plans to continue through specifically allocating funds for “tribal nature-based solutions.”

Similarly, OPC Deputy Director Jenn Eckerle said that although the agency is excited for the climate resilience opportunities, “the most important part is the reconnecting of the land to the Wiyot for cultural practices and restoration. It’s been an incredible partnership.” She added, “We want it to be a model across the state.”

Planning for the site will be led by the Wiyot tribe and tribal staff with an initial goal of getting Wiyot citizens on the land to begin a visioning process. Restoration efforts will include removal of Scotch broom, pampas grass and English ivy. The tribe also plans to continue working with Cal Poly Humboldt. Students, faculty and staff from the Environmental Science and Management Department, the Native American Studies Department, the Food Sovereignty Lab and Traditional Ecological Knowledges Institute and the Inidan Natural Resources, Science and Engineering Program will be involved in research and ecocultural restoration planning on such topics as food sovereignty, food propagation, legal and financial considerations, water quality, wetland and forest restoration and more. Humboldt Baykeeper will contribute to efforts to monitor and seek to improve water quality at the site.

In his press release, Canter points to the vision to come. “The enduring cultural landscape and return of Mouralherwaqh to the Wiyot people is one gleaming step toward the healing of the past that will shine over Wigi and the North Coast for generations to come.”

At the ceremony, with turkey vultures coasting on updrafts, salmon roasting on spits nearby and the promise of breaking bread together imminent, Chair Hernandez was more succinct. “This is how we make change in today’s world,” he concluded. “We’re going to bring the beauty back.”

Jennifer Savage (she/her) has resided on Wiyot land for 20 years.