September 01, 2022
2 comments
A couple weeks after the matter spilled cantankerously into public view, Humboldt County and Building Department staff is recommending the Planning Commission approve the permits necessary to allow a local developer to continue construction of his family home, with some revised conditions, at its meeting tonight.

The issue arose after Travis Schneider violated the terms of a coastal development permit needed for construction of his 8,000 square foot family home Walker Point Road near Fay Slough, south of the Indianola Cutoff and east of U.S. Highway 101. Specifically, Schneider began construction on the home with a slightly different footprint than what had been listed on an approved building permit, cleared brush and native blackberry in areas deemed ecologically and culturally sensitive, including one identified more than a century ago as a historical Wiyot village site, and cut an unpermitted temporary construction road on the property. The county issued a stop work order in December and, some weeks later (more on that in a bit), Schneider complied and work has remained halted since. 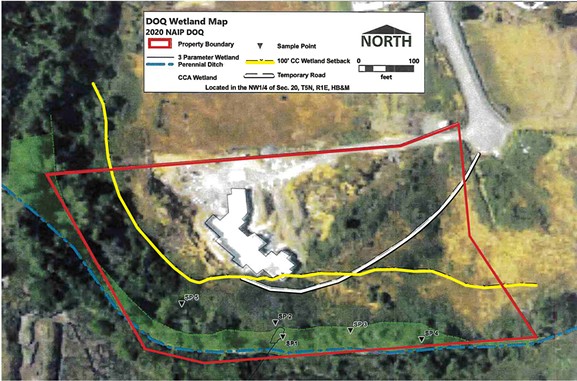 Schneider and planning staff were optimistic a resolution had been found during an Aug. 2 meeting with the Wiyot area tribes — comprising the Wiyot Tribe, the Bear River Band of Rohnerville Rancheria and the Blue Lake Rancheria — and the California Coastal Commission when the matter was set for a hearing at the Planning Commission’s Aug. 18 meeting. But the day prior to the meeting, the Wiyot Tribe, Blue Lake Rancheria and California Coastal Commission submitted letters urging the commission to reject the permit, saying details remained to be ironed out on generally agreed upon mitigation measures, including who would pay for tribal monitoring efforts and who would hold a proposed conservation easement.


When the commission met, things got contentious quickly, with Tina Christensen, a prominent local Realtor representing Schneider, saying the tribes had lied and Commission Chair Alan Bongio implying they were out to extort more concessions from Schneider after reneging on an agreement. Bongio also made various comments about “Indians,” saying they played games with cultural resources and warning the situation could precedent in which nothing would get built in Humboldt County and everything would have to go before “the Indians” for approval.

Officials with the Wiyot Tribe and Blue Lake Rancheria found the comments “offensive” and “inappropriate,” with Wiyot Tribal Chair Ted Hernandez saying he’d “lost faith” in the Planning Commission and the Blue Lake Rancheria issuing a statement saying it left the meeting with a “much lower confidence” in the body that governs many land use decisions on Wiyot ancestral territory. (Read more about the meeting and its background here.)

In its report, county planning staff makes clear it attempted to incorporate some of the concerns the tribes and the Coastal Commission raised in their Aug. 17 comment letters — clarifying that the Wiyot Land Trust would hold the conservation easement and that it would be permanent, among other modifications. Staff also advises that the mitigation measures were previously written with “clear timing metrics and direction as to implementation,” some of which require tribal review prior to lifting the stop work order, and recommends the commission move forward. (Read an executive summary of the staff report here and the whole report here.)

First, while planning staff and some commissioners represented at the Aug. 18 meeting they were surprised when the California Coastal Commission weighed in on the matter to recommend denial as the comment period came to a close, it appears perhaps they should not have been.

Coastal Commission North Coast District Manager Melissa Kraemer sent an email Aug. 8 to Planning Director John Ford and county Planner Cliff Johnson, as well as tribal representatives, raising questions about the principal agreement on the table and, in part, suggesting it would be wise to wait for more details to be ironed out before the matter was brought to the Planning Commission.

“Perhaps that is another reason to delay bringing this to the [Planning Commission] until comments can be received and integrated into an updated revised plan.” tweet this
“We understand the desire to finalize things in time for the Aug. 18 agenda, but without having the information needed to inform the county’s decision on hand and circulated ahead of time, perhaps it would be prudent to delay a bit longer and schedule for a subsequent PC agenda,” Kraemer suggested.

Kraemer’s email includes a number of other suggestions and comments, as well. She says the stop work order should not be lifted upon Planning Commission approval but when the action is deemed final, meaning the appeal period has run out — a suggestion county staff then incorporated into the conditions of approval. She suggests various aspects of the principal agreement need fine tuning, like the exact locations of wetland setback areas, planting areas, restoration areas, fence lines and the easement. Perhaps most notably, she says the Coastal Commission had yet to offer comments on a restoration plan that was prepared July 18 but, she says in the email, was only “recently” circulated.

“A map is not included with the plan but would be helpful to understand where plantings are proposed. Does the restoration plan address road removal? It’s unclear,” she writes, adding that the tribes’ comments on the plan have also not been received and “perhaps that is another reason to delay bringing this to the [Planning Commission] until comments can be received and integrated into an updated revised plan.”

The county also released a Jan. 19 letter from Johnson to Schneider regarding the stop-work order — a letter that was referenced by Christensen at the Aug. 18 meeting. Sent 23 days after the county’s initial stop work order on the project, Johnson advises Schneider that the county is aware that additional work has continued at the property, noting it was “documented” by his department on Dec. 30, and that Schneider himself advised the county on Jan. 3 that he “would not stop working on the residence.” Johnson warns Schneider that continued violations of the stop work order could result in fines or revocation of his project permits.

At the meeting, reading from a letter from Schneider, who was not in attendance, Christensen reported that Schneider reached out to Planning and Building on Jan. 3 saying, “While I sought clarity from the county, we continued to work on our home.” The letter then references the Jan. 19 letter from Johnson, saying Schneider “immediately responded” and spoke to Ford, Johnson’s boss, and it was “mutually agreed upon that we continue to work and meet in early February.”

The Journal reached out to Ford by phone and email to confirm this, but has not received a response. (Editor's note: Ford responded after publication of this article and disputed Schneider's account. Read more here.) But if Ford did agree that Schneider could continue work, it would seem a sharp departure from the county’s stance in Johnson’s letter, which outlines the various permit violations on the property and what must be done to assess the damage done.

Johnson then gives some detail in what must be done before the stop work order can be lifted, allowing construction to continue.

“An assessment of damage to both biological and archeological resources must be completed before this stop work order will be lifted,” Johnson wrote. “Due to the known archeological site that was required to be protected within the mapped non-buildable area, the county proposes to hire, at your expense, a qualified archeologist to conduct a damage assessment and mitigation plan as required per the conditions of the Inadvertent Discovery Protocol of the Coastal Development Permit.”

Additionally, he writes that Schneider will have to hire a qualified biologist to map the environmental sensitive habitat areas that were disturbed and identify remedial actions.

But according to Schneider’s letter, Ford, that same day, agreed Schneider could continue working on the property before those requirements were met. Ford did not address the matter during the Aug. 18 meeting. However, amid the accusations the tribes had “lied,” Bongio’s obvious frustration the matter hadn’t been resolved and wide-ranging comments about “Indians” that tribal leaders found deeply offensive, the director said he believed the fact the stop work order “wasn’t immediately followed … created some heartache.”

The Planning Commission meets tonight at 6 p.m. in Supervisors Chambers at the Humboldt County Courthouse. Find the agenda and a link to a live stream of the meeting here.