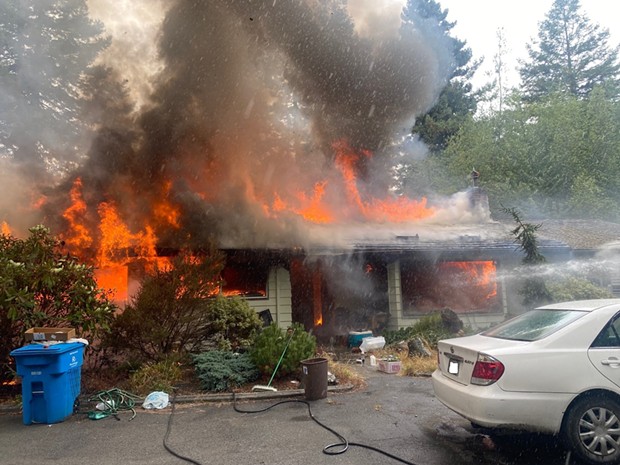 Humboldt Bay Fire found the body of a dead man at a residential structure fire in the 5100 block of Woodland Way, a rural area off Myrtle Avenue north of Eureka, yesterday afternoon.

According to a press release, the department was dispatched to a report of a structure fire at about 2:15 p.m. and responded with three engines, a truck and a battalion chief.

The first unit arrived to find the house fully involved, with fire showing through the roof and requested a second alarm response as Humboldt Bay Fire units began to attack the blaze. The fire posed no threat to nearby woodlands or residences, according to a press release, and fire crews were able to knock it down in about a half an hour.

"While extinguishing the fire, firefighters discovered a deceased adult male in a rear bedroom," the press release states, which does not identify the man.

The cause of the fire is unclear, though it "was accidental in nature," according to the release.