Editor’s note: Twenty-one years ago today, at 10:03 a.m., Flight 93 crashed into a Pennsylvania field after passengers and crew members fought back against 9/11 hijackers, sacrificing their lives to prevent the plane from reaching its intended target, thought to have been the U.S. Capitol.

One of those passengers was Richard Guadagno, the former manager of the Humboldt Bay National Wildlife Refuge, who was flying home from his native New Jersey, where he’d been attending his grandmother’s 100th birthday.

As part of an interview with the Journal four years ago, Diqui LaPenta, who was his girlfriend at the time, said one of the best ways to honor his memory is to visit the refuge or just "appreciate where we live and do everything you can to protect the natural beauty."

The following is the full story on Guadagno from the Journal's Sept. 13, 2018 edition.


Guadagno was just two weeks shy of turning 39 when he died, believed to be one of the passengers and crew who stormed the cockpit of Flight 93, bringing the plane down on an empty field rather than its intended target, thought to have been the U.S. Capitol.


The pain of his loss is evident as LaPenta recalls their time together, her voice raw with emotion as she talks about the man she knew and once thought she might marry.


The two had begun dating in March of 2000 and although Guadagno liked to say the two met at Clam Beach, which she says is technically true, that's really where they saw each other for the first time after becoming acquainted via online personals.


It was a doggy walking date, LaPenta says, he with his black German shepherd and constant companion "Raven" and she with her Australian shepherd mix "Aiki."


They had a great deal in common, including a love of animals and backgrounds in biology. He managed the Humboldt Bay National Wildlife Refuge and she's a professor at College of the Redwoods and the associate dean for Math, Science, Behavioral and Social Science.


The plan had been to spend a couple of hours together but they decided to go out for brunch and she knew almost immediately their connection had the makings of something special. "It was him in his truck in front of me and I saw him reach over and he kissed Raven and I was like, 'I could love that man,'" LaPenta recalls. 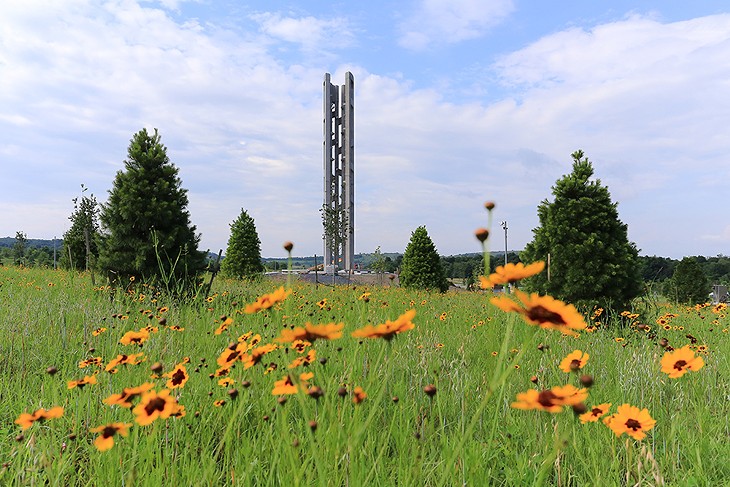 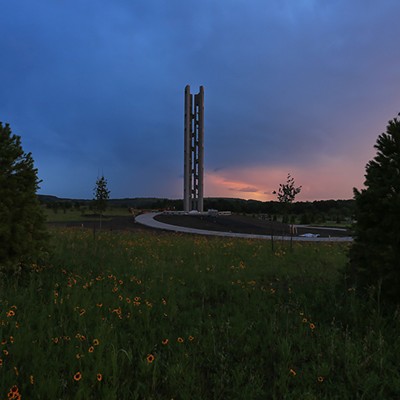 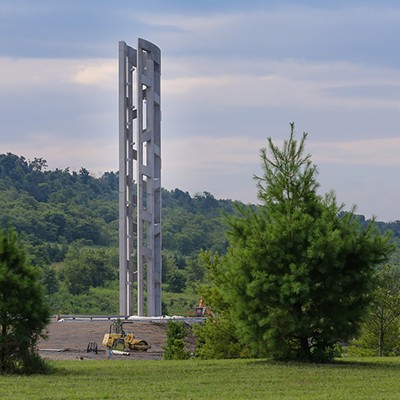 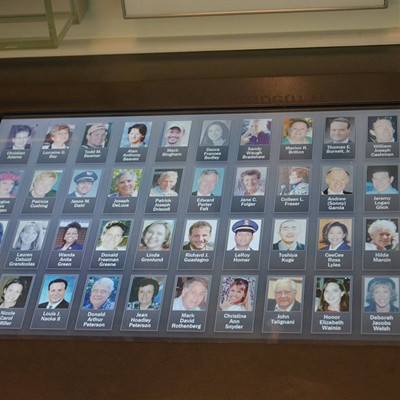 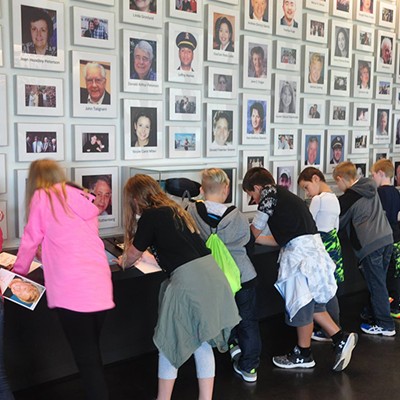 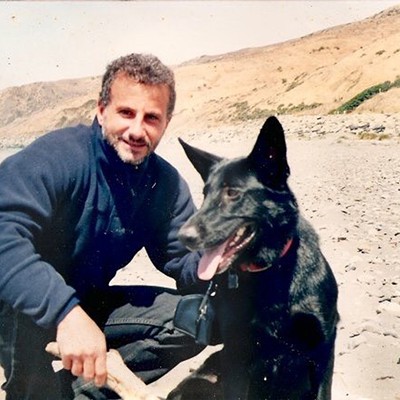 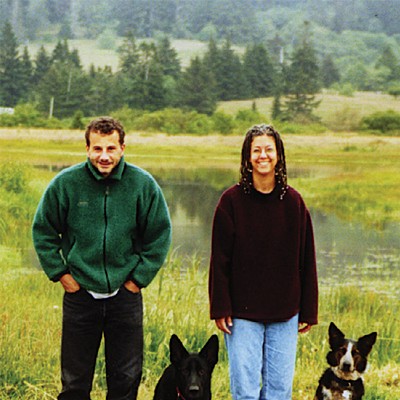 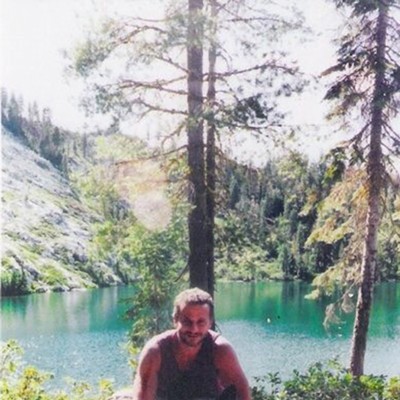 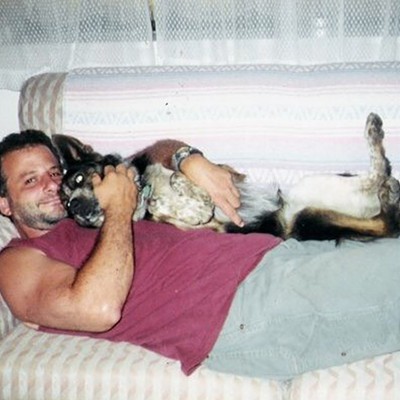 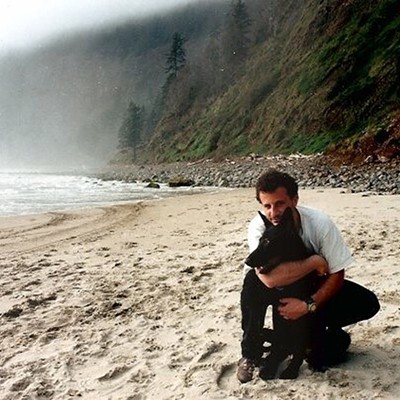 
It wasn't a rut, LaPenta emphasizes, they were simply happy. They spent a lot of time enjoying the region's natural beauty, often traveling to the Mendocino coast, she says, noting that they were model dog owners who were careful to never take their canine duo on trails or other areas where dogs were not allowed.


The couple took the trip of their lifetime together in August of 2001, journeying out to the Big Island, where pictures show the two smiling as they posed together in front of a cascading waterfall.


Guadagno had flown to his native New Jersey to celebrate his grandmother's 100th birthday and was returning home on the early morning flight out of Newark.


LaPenta says she is often asked if he called her from the plane. He didn't. In fact, she says, he hated his cell phone. "In that situation, while I know he was thinking of me and his family, we were safe," she says.


Guadagno, his fellow passengers and the crew of Flight 93 were remembered in two ceremonies this week.


On Sunday, encircled by trees and rising above a sprawling Pennsylvania meadow brimming with wildflowers, the 93-foot Tower of Voices was dedicated — each of the fallen represented by the 40 wind chimes that descend down the concrete memorial.


The design, according to the Flight 93 Memorial, is meant to allow their silenced voices to continue to resonate with "tones that convey, through harmony and discord, both the serenity of the site and the tragic event."


"Together their voices will ring out into perpetuity, with this beautiful Somerset County, Pennsylvania, wind," park Superintendent Stephen Clark told the crowd gathered for the weekend ceremony despite the gusting wind and pouring rain.


"It reminds us of the power to take action in the face of adversity," he said.


On Tuesday, President Donald Trump and First Lady Melania Trump marked the Sept. 11 anniversary at the Shanksville, Pennsylvania, memorial with the president commemorating those on the flight for sacrificing themselves to "save the lives of countless Americans."


Similar thoughts were echoed by Rev. Paul Britton, the brother of passenger Marion R. Britton, who said their actions "challenge us to do no less than live strong lives, courageously, for others."


One by one, the names of all 40 were read with the Bell of Remembrance tolling in the background.


LaPenta did not make the trip out to the Tower of Voices dedication or Tuesday's ceremony, but she has visited on two other occasions, including the 10th anniversary of Sept. 11.


On that date each year, family members are allowed to visit the crash site through a large ceremonial gate made from hand-hewn hemlock — a grove of which the plane came to rest in — which is only opened for a few hours.


LaPenta describes it as a peaceful place — the physical scars of the crash no longer visible on the landscape. In the end, she says, "nature wins."


"It's just a really beautiful meadow with a big rock in the middle," LaPenta says.


Instead of going to this year's observance, she planned to go by the refuge that Guadagno loved so much to spend a few quiet moments in the memorial garden in front of the visitor's center that now bears his name.


Describing Guadagno as "a fierce defender of the environment," LaPenta related a story about how he once came upon a man dumping the remnants of a meth-making operation on the grounds of the refuge he had managed in Oregon before moving to Humboldt County.


Guadagno had been out for a run, clad in shorts without his badge or gun, when he made the arrest. "He just did it," LaPenta says.


Few things, she notes, could provoke him to anger more quickly than someone harming the environment. One of the best ways to honor his memory, she says, is to visit the refuge or just "appreciate where we live and do everything you can to protect the natural beauty."


"If you see garbage, pick it up," LaPenta continues. "Take care of our coast. Take care of animals."


While she describes him as a "homebody" who loved spending time in his A-frame home overlooking the bay, the grounds of which were dotted with some 200 trees that he planted himself, Guadagno also enjoyed entertaining.


"He loved to cook and was a good cook," LaPenta says. "So, we had a lot people in the house, a lot, just feeding them."


Guadagno was also a woodworker and a stained-glass artist. He built an electric violin, which LaPenta says she never heard him play, and had been in a band during his time in Oregon.


LaPenta says she even has a cassette recording of him playing the Nutcracker Suite on acoustic guitar. "It's pretty impressive," she says.


One of her most difficult days in the ensuing years was when she turned 39, a milestone he had been dreading because it meant 40 was just around the corner.

"It was hard turning older than he ever got to be," says LaPenta, who is now married to a local attorney. Together, they raised Raven and Aiki through their last years.


LaPenta never doubted that Guadagno was among the passengers and crew who tried to take back control of the plane but, about a month after the crash, word came of a miraculous discovery that would cement what was already a widely held belief among those who knew him.


Guadagno's Fish and Wildlife Service badge — No. 1038 — was found amid the wreckage of the cockpit. It had apparently been suctioned out of the plane and deposited in a tree before being blown down in a wind storm, somehow surviving in near perfect condition.


His family has donated the badge to the Flight 93 Memorial, where it sits on display.


"In his mind, there wouldn't have been anything else he could have done," LaPenta says.


Kimberly Wear is the assistant editor and a staff writer at the Journal. Reach her at 441-1400, extension 323, or kim@northcoastjournal.com. Follow her on Twitter @kimberly_wear.