Supes to Consider Censure of Bongio 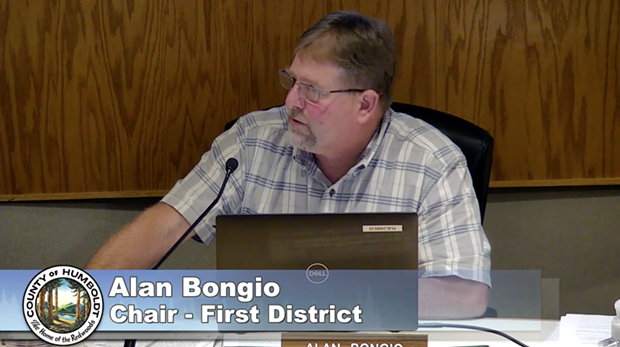 The Humboldt County Board of Supervisors is slated to consider censuring Planning Commission Chair Alan Bongio tomorrow, a month after he made incendiary and offensive comments about local Native tribes, referring to them as “Indians” while intoning they had lied and negotiated in bad faith with a local developer.

The agenda item will also see the board consider directing staff to develop a code of conduct and a diversity, equity and inclusion policy for the county’s boards and commissions.

Fifth District Supervisor Steve Madrone, who brought the agenda item forward, said he would have asked the board to consider removing Bongio from his position on the Planning Commission but it doesn’t have that authority, which rests with First District Supervisor Rex Bohn. Madrone said he found Bongio’s conduct at the commission’s Aug. 18 and Sept. 1 meetings troubling and felt it needed to be discussed by the board.

“I feel a responsibility to the community,” Madrone said. “It’s not OK and I’m not just going to go around and let that kind of stuff go unchecked and unchallenged. Otherwise, what are we doing here?”

Bongio has been under increasing scrutiny since the commission’s Aug. 18 meeting, when the commission chair repeatedly made far-reaching comments about “Indians” while accusing two local tribes — the Blue Lake Rancheria and the Wiyot Tribe — of negotiating in bad faith, trying to extort more concessions out of local developer Travis Schneider, playing a “game” with cultural resources and reneging on an agreement. Tribal officials and others found Bongio’s comments offensive, with Wiyot Tribal Chair Ted Hernandez saying they’d caused him to lose faith in the Planning Commission.

During the commission’s Sept. 1 meeting, Bongio apologized to the tribes if he “in any way offended them.”

On Sept. 8, heads of nine local nonprofit organizations signed a letter to Bohn asking for Bongio’s resignation or that Bohn rescind his appointment to the Planning Commission, deeming his conduct “unacceptable” and saying it “makes clear that he is not fit for this position.” Then on Sept. 13, Humboldt Community Services District Boardmember Michael Hansen asked that the elected board consider stripping Bongio, one of its members, of his status as board president at its Sept. 27 meeting.

Tomorrow, in addition to considering a censure of Bongio and directing staff to develop a code of conduct and diversity policy, the Humboldt County Board of Supervisors will also discuss appropriate rules of conduct and behavior for planning commissioners and “take other appropriate action as necessary.”

Madrone said that could include a motion to “recommend” Bohn remove Bongio from the commission or a revisiting of the rules governing Planning Commission appointments to put them to a vote of the board rather than allowing supervisors to tap whoever they want to serve.

“I don’t know where these votes are going to go, but I can tell you that one of the board members told me right after what happened that if their appointee had spoken and behaved that way, they would have yanked them immediately,” Madrone said.

Bohn did not immediately respond to a request to comment for this story, but he spoke to the Times-Standard about the nonprofits’ letter and seemed to indicate he didn’t plan to remove Bongio from the commission. He said Bongio’s comments were “inappropriate” and “inarticulate,” but added that in nine years on the Planning Commission, “This is the first indiscretion he’s had.”

Careful to say he’s going into tomorrow’s meeting with an open mind and wanting to hear other supervisors’ perspectives on the issue, Madrone said he found Bongio’s conduct troubling, saying he blamed two local tribes for negotiating in bad faith while writing off Schneider’s permit violations as “mistakes” and noting that Bongio “insinuated the term ‘Indian giver’” when accusing the tribes of reneging on an agreement.

“It just seemed to me to be really callous, and show a complete disregard for the really good work we’ve been doing in our community lately to heal wounds, and respect Native culture and race and religious differences, and to actually start working with people to return land to Native people,” Madrone said.

Madrone noted that a continuation of some of that “really good work” is actually slated to take place just before the board takes up the Bongio discussion, when the board will consider supporting a proposal to the U.S. Board of Geographic Names to rename the Patrick’s Point headland Sue-meg Point. Last year, the Yurok Tribe and California State Parks restored the name to what’s now known as Sue-Meg State Park, noting that the park — and the headland within it — had been named after a settler who’d claimed the Yurok ancestral lands and was accused of murdering numerous Native people, including a young Yurok boy.

California State Parks has submitted a request to the U.S. Board of Geographic Names to rename the headland and Madrone is asking the board to consider supporting the request.

The board’s meeting begins at 9 a.m. tomorrow in Supervisors Chamber in the Humboldt County Courthouse, 825 Fifth Street. It can also be viewed online here.