It appears Travis Schneider’s problems may have just doubled in size.

The local developer’s efforts to get a permit and permit amendments necessary to lift a county stop work order and resume construction of his family home on Walker Point Road south of the Indianola Cutoff have already been complicated by concerns over the permitted size of the structure. But Humboldt County Planning and Building Director John Ford confirmed to the Journal late yesterday afternoon that the actual building area of the structure is effectively two stories and 20,817 square feet — far larger than the 8,000 square feet with a 1,000 square-foot natural light cellar Schneider had listed on his coastal development permit application, an estimate that has been repeated in county staff reports and Planning Commission discussions.

Ford, whose department looked into the matter after a Sept. 9 Journal inquiry as to whether the often-repeated numbers were accurate, said there will likely be some discussion about how much of the square footage of the house is living space but there is no question the structure is far larger than what was permitted.

Ford said the house is, however, being built in accordance with building plans submitted to the county after Schneider received the coastal development permit.

“The plans show a bigger house,” he said, adding that he doesn’t know why plans obviously out of step with the permit would have been approved by the county, explaining the planner who approved them has since retired. “They should have been reviewed by staff. He is building what was on the construction plans. They were approved. They were signed off on.” The revelation raises a host of questions and likely will have significant impacts on Schneider’s efforts to resume construction.

The county issued a stop work order on the project Dec. 27 after it was discovered that Schneider had violated the conditions of his permit by: locating the structure on a different footprint than approved, intruding on a wetland setback requirement; clearing environmentally sensitive habitat; grading over a known Wiyot cultural site; and cutting a temporary construction access road on the property. (It was later also discovered that he failed to get a required septic system permit.) 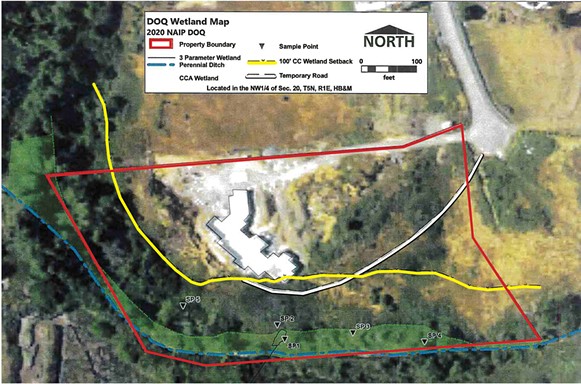 Schneider then continued construction in violation of the stop work order for 50 days, later explaining that he did so while seeking “clarity” from the county and then with the approval of Ford, who has strongly denied that was the case.

After consulting with local area Wiyot tribes, biologists, county staff and others, stakeholders met Aug. 2 to discuss mitigation and remediation measures that would be agreeable to the tribes and the California Coastal Commission, which now has appeal jurisdiction over the project because Schneider started building the house outside of its approved footprint and encroached upon the adjacent wetland. Schneider and county staff left the meeting feeling they had reached an agreement and consideration of permit modifications and a new permit that would clear the way for the lifting of the stop work order were put on the Planning Commission’s Aug. 18 agenda, where the matter was thrust into public view in explosive fashion.

In comments submitted prior to the meeting, the Wiyot Tribe and Blue Lake Rancheria both urged the Planning Commission not to allow the project to move forward, saying there were still details to be worked out in the mitigation and remediation measures, while the California Coastal Commission also weighed in to register it still had concerns and to remind the Planning Commission it also had ultimate jurisdiction over the project on appeal. Planning Commission Chair Alan Bongio and Schneider’s representatives were clearly upset at the prospect of further delays to the project, with Schneider’s representative saying the tribes had “lied” and reneged on an agreement, and Bongio repeatedly making far-reaching comments about “Indians” and suggesting they had negotiated in bad faith, were playing a “game” with cultural resources and were trying to extort more concessions out of Schneider, causing tribal officials to walk away from the meeting offended, their faith in the commission shaken. (The Humboldt County Board of Supervisors voted unanimously Tuesday to censure Bongio and ask that he step down as the commission's chair.)

The matter then came back to the Planning Commission two weeks later, after commissioners opted to give staff additional time to try to forge an agreement that would get buy-in from all parties. At that Sept. 1 meeting, Ford told commissioners in no uncertain terms that he’d been in touch with multiple layers of California Coastal Commission staff leadership and they had expressed concerns about whether the house conforms with the local coastal plan.

“They’re concerned with the size and the mass of the house in a very scenic location and whether or not that fits within the setting of the property,” Ford said, later explaining that when Schneider moved the house’s footprint closer to the Fay Slough Wildlife Area — violating the wetland setback requirement and putting the project in the Coastal Commission’s jurisdiction — it also made it “more prominent, more visible,” heightening Coastal Commission staff’s concerns. 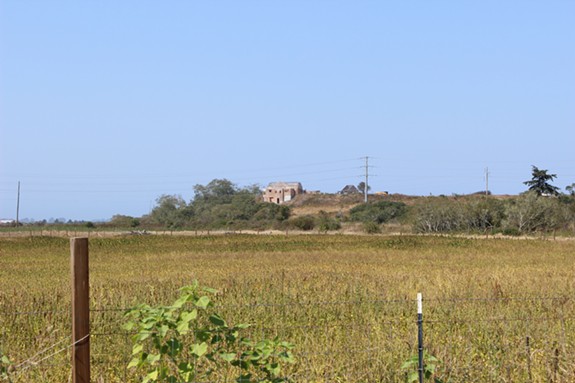 “I recall when the original permit went through in 2017 that we had concerns with the size of the structure and it being out of character for the area,” she wrote in an email to the Journal, adding there were also concerns about its proximity to the adjacent wetland and the adequacy of an associated biological study.

But because the project was ultimately sited 100 feet back from the wetlands — and therefore not appealable to the Coastal Commission — Kraemer said she simply recommended the county condition the permit to provide vegetative screening to limit the home’s impact on the public viewscape. With the house now located within that 100-foot setback, the project is in the Coastal Commission’s jurisdiction and Kraemer said staff has again expressed concerns about the house’s size and that, given its new footprint, there “may be a greater visual impact than originally considered.”

Informed the structure is actually more than 20,000 square feet — not the 8,000 that initially posed concerns — and asked if that exacerbates existing concerns about the project being out of character with the area and having a larger visual impact, Kraemer responded simply: “Yes and yes.”

There are no clear objective standards, Kraemer said, so the county “needs to evaluate whether the modified house design confirms or whether certain mitigation measures or project changes are needed to ensure conformance.”

The subject of the project’s compatibility with the surrounding area was discussed by the Planning Commission at its Sept. 1 meeting after Ford raised the Coastal Commission’s concerns.

At that meeting, Bongio argued that the project didn’t strike him as incompatible with the surrounding neighborhood. 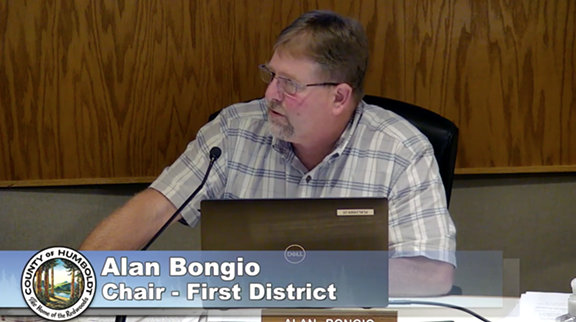 “There’s multiple houses at the end of this subdivision that are above-average size,” he said. “I can’t tell you what the neighboring houses are, but I’m going to make a guess — and I’m a pretty good judge of looking at house, having built them for 40-something years — that everything that’s at the end of that point is probably in the 4,000-to-6,000 [-square-foot] range.”

Bongio then said the way Schneider’s home is constructed — with a single story set over a “daylight basement” — minimizes its visual impact.

“I don’t believe it’s out of proportion to what’s there,” Bongio said. “Those were definitely executive-type lots that would have that size of house on them.”

Driving down Walker Point Road to where it dead ends at the Schneider’s property at the end of a knoll overlooking the Fay Slough Wildlife Area with views of the bay, it’s clear the homes there have been subdivided and developed in stages. Closer to Indianola Cutoff, the homes are smaller and appear older, while the houses closer to the end of the road are clearly larger. But Bongio’s estimates are off, according to the square footages listed for neighboring homes on various real estate websites.

The websites indicate neighboring homes generally fall between 2,000 and 3,000 square feet, with the largest — one specifically referenced by Bongio at the Sept. 1 meeting as appearing larger than Schneider’s — coming in at just over 3,500.

Commissioner Brian Mitchell suggested at the meeting that the county conduct an analysis of recently built neighboring homes to help the commission judge whether Schneider’s project is in line with the neighborhood, but Bongio pushed back, saying the “train left the station” when the house was permitted, and he didn’t believe it appropriate to go back and do a “de-facto design review at this juncture.”

Of course, it’s now clear what was permitted is not what is being built.

Bongio, who said multiple times over the two Planning Commission meetings that he’s made numerous visits to the project site and is familiar with the building plans, did not immediately respond to a Journal email asking if he knew the home’s actual square footage was more than double what was permitted and repeatedly referenced in planning documents and commission meetings and, if so, why he didn’t take steps to address the discrepancy and correct the record.

Schneider also did not immediately respond to an email inquiring why he did not take steps to correct the actual square footage of the house. 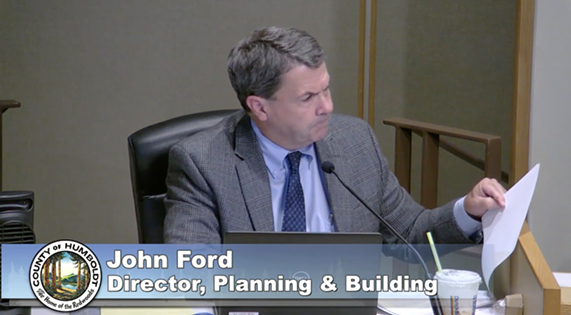 For his part, Ford said he had meetings scheduled with Schneider and Coastal Commission staff this morning to discuss the issue and determine next steps. He made clear this is a significant issue — one that will require either further modification or even revocation of the coastal development permit, which he said is the document governing what can be built on the site.

“I don’t want to overreact or under-react at this point,” he said. “There’s a whole range of things that could happen. But it does throw another wrinkle in the process — more than a wrinkle. I don’t want to understate it.”

Asked about his department’s approving building plans that were not in conformance with a coastal development permit and the recent discovery that it had issued Schneider a building permit without a required septic permit, Ford said mistakes have clearly been made.

“This is — I don’t even know how to describe this,” he said, his voice trailing off momentarily. “It’s whatever could go wrong did go wrong. … We’re absolutely going to be talking about this — and in fact, we’ve already talked about this and, when we’re on the other side of this, will make a study of things that have gone wrong and can go wrong, where perhaps the applicant did some things that led us down one path and we accepted that. This is not something that I take lightly at all.”

Complicating matters, Ford said, is that the planners who oversaw the early stages of the project have both retired so he “can’t really talk to” them about what happened. Asked if he feels Schneider intentionally misled the county or willfully violated permit conditions, the director said he couldn’t say.