Bongio Steps Down as PlanCo Chair, Commission Approves Letter of Apology to Tribes 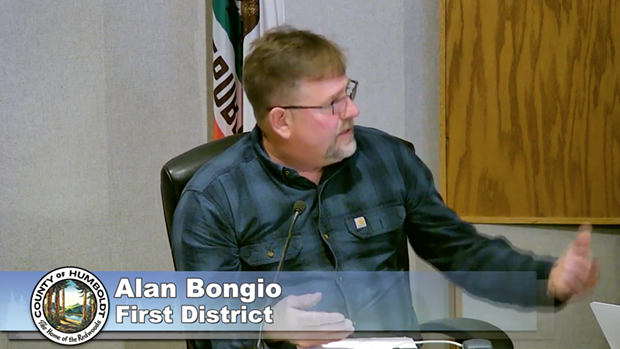 Humboldt County Planning Commission Alan Bongio officially stepped down as the commission’s chair before last night’s meeting, at which he and fellow commissioners voted unanimously to send a letter of apology to three Wiyot area tribes stemming from his conduct at a meeting last month.

Bongio did not speak at the meeting about stepping down from the chair position, which the Board of Supervisors voted unanimously to ask him to do while censuring him last month. As such, the meeting got off to a bit of an awkward start.

“Alright everyone, it is 6 o’clock on Oct. 6, and it is time to get this meeting of the Humboldt County Planning Commission started,” said Commissioner Noah Levy. “I call this meeting to order. I am Noah Levy and I’m the vice chair serving as chair for this meeting. I guess we’ll begin by having a salute to the flag.”

As the commission’s flag salute came to a close, Levy could be heard saying, “I’ll correct that.”

“I just want to make a quick correction,” Levy said. “I was the vice chair but Chair Alan Bongio has stepped down as chair prior this meeting. So as of now, for this meeting, I am the chair of the commission.”


Later in the meeting, Levy asked that a vote be held at the next meeting to determine the commission’s chair and vice chair moving forward.

During its Aug. 18 meeting, the commission was considering possible permit modifications needed to lift a stop work order on construction of developer Travis Schneider’s home issued after it was discovered he’d violated his coastal development permit in numerous ways. The Wiyot Tribe and the Blue Lake Rancheria had submitted comment letters urging the commission not to move forward, saying more details needed to be worked out in terms of mitigation and restoration plans to gain their support.

A representative of Schneider’s accused the tribes of lying, after which Bongio accused them of acting in bad faith, playing a “game” with cultural resources to extract more concessions out of Schneider and reneging on a deal, though Bongio said he had “another term for it, but whatever.” Throughout his remarks, Bongio used the term “the Indians” in reference to multiple local tribes, which tribal officials and others found deeply offensive.

The draft letter did not name Bongio specifically and offers an apology on behalf of the entire commission.

“This letter is written to express our sincere apology to the Wiyot People,” it states. “At the Planning Commission meeting of Aug. 18, 2022, comments were made that were inappropriate. We as a body recognize that these were insensitive, racist and biased. The comments added to past injury and injustices resulting from governmental actions. We as the Humboldt County Planning Commission did nothing to address the problem in the moment so we are all responsible. We understand this has damaged the relationship between the Planning Commission and the Wiyot People. We apologize for each of our roles in this event and ask for your forgiveness.”

The letter concludes by asking the tribes, if they would be willing, to schedule a meeting outside of the courthouse so the commissioners can “hear from you, grow in our understanding and seek restoration.”

When the commission started discussing the draft, some changes had already been made from the version in the staff report. Specifically, the new draft of the letter included a line noting that comments at the meeting “understandably may have shaken your faith in the impartiality of this commission,” and struck the line asking for forgiveness, replacing it with: “We understand … and that cultivating a positive relationship with the Wiyot people will require time and commitment.”

Commission Thomas Mulder seemed to reference the chances when he registered some concern about possible violations of California’s open meeting laws, saying some commissioners had weighed in on the draft letter via email prior to the meeting.

Commissioner Peggy O’Neill, who had been the most vocal commissioner in pushing back against Bongio’s remarks during the Aug. 18 meeting, was then the first to address the draft letter’s content.

“I don’t like the way it was written and the way it insinuates that we as a group did nothing and that ‘we're all responsible," O'Neill said. "I don’t feel responsible for someone else’s behavior. I mean, maybe I could have jumped up and down … I’m fine with a letter, I’m fine with sending something out, I’m just not going to sign something that says I feel like I’m responsible for something I don’t feel I’m responsible for. I did make my comments at the meeting. It’s more than just the use of one word that occurred that evening. There was people being called liars, and that was inappropriate. There were a lot of things that went on that evening that shouldn’t have went on. And for that, I don’t know who should have stopped us, who should have been the one that jumped up and said something and therefore we wouldn’t have to write a letter saying we’re all racist and biased. I’m not racist, and I’m not biased and I’m not insensitive, and I don’t feel like signing a letter saying that I am and that I’m responsible for that type of behavior.”

Bongio then indicated he couldn’t agree more with O’Neill’s feeling that some on the commission had pushed back on his comments during the Aug. 18 meeting. He said he didn’t really want to have input on the letter, but then launched into a seeming defense of his conduct, while saying he wasn’t trying to make excuses.

“All I would say is, not trying to make excuses for any of that meeting, I’m just saying if we don’t, at this commission, ask hard questions and we don’t delve into things, I think we’re doing just as big of an injustice to the county of Humboldt because it is our job to sort through these issues,” Bongio said. “Because there’s some things that didn’t add up that night. I think everyone felt it — well, I think the majority felt it ... I’m just saying that I think we run a real risk when we’re so worried about being politically correct or — I don’t even know what the term — woke enough? I don’t know what the term is exactly that goes over this. I’m just saying we need to have respect in the discourse and I will say it was not my best night. You know, I’m just trying to be honest here but I think we go down a really slippery slope if we can’t be open to talking about the project and the whole thing, whatever it is. Because there is going to be another project like this — I can promise you — the way things have been going.”

Levy then called on Commissioner Melanie McCavour but Ford interjected.

“I just, chair, I would like to ask for a break,” he said. “Because I just sense that this could get very, very sensitive and I would ask you — I don’t’ want to avoid the conversation but I also am concerned about how this conversation could go.”

McCavour indicated she wanted her chance to speak, and echoed O’Neill’s concerns about painting the entire commission with one brush in the letter. She said it would be hard to come up with a letter that “encompasses everyone’s feelings and thoughts,” suggesting maybe just inviting the tribes to a luncheon to discuss the issues would be more productive.

Commissioner Brian Mitchell stressed that he felt it very important to send the letter out, saying he agreed with some light edits suggested by O’Neill to change the letter form stating that the commission “did nothing” to stating that it “did not do enough” to address the problem during the meeting. O’Neill reiterated that she doesn’t know what more she could have done in the moment.

Ford then interjected that this is an issue he’s working with the County Administrative Office on, as far as coming up with a code of procedures for the commission. Normally, he said, it is up to the commission’s chair to address any behavior that violates general rules of conduct.

“But then what happens when perhaps that behavior is coming from the chair?” he asked. “How does a commissioner respond? Is it up to the staff? I’ve never seen staff admonish a commission, in all honesty … . The reality is that the commission is the authoritative body here.”

Ford then called it a “nearly impossible situation” without guidance in place.

Commissioner Mike Newman then said he wanted to “take the temperature” of the rest of the commission on possibly taking out the adjectives “racist” and “biased,” leaving just “insensitive.”

“What are the feeling of the rest of the commissions about those?” Newman asked, later saying he thought “insensitive was enough there, in my opinion.”

O’Neill then asked for county counsel’s input on using the terms, once again saying she doesn’t feel she was racist or biased. County counsel responded that the meeting is a matter of public record and she wasn’t concerned about additional risk.

Ford then interjected again to say the intent was to recognize two things: that there were comments made and that the response from the commission wasn’t adequate.

“In all honesty, part of a good apology is to completely own what happened and not try to understate it and make it seem like it wasn’t as bad as it really was,” ford said. “And this letter was written to forcefully state that what happened wasn’t appropriate and that’s why some strong adjectives are used.”

Commissioner Thomas Mulder then weighed in saying it’s better to leave the stronger adjectives in the letter, saying the people the commission was apologizing to may feel them appropriate.

McCavour then requested changing the invitation at the close of the letter from a meeting to a luncheon, saying it’s a "nicer way to meet people."

With the edits in place, the commission voted unanimously to approve sending the letter to the Wiyot Tribe, the Blue Lake Rancheria and the Bear River Band of Rohnerville Rancheria.

See a copy of the finalized letter language below:

This intent of this letter is to express our sincere apology to the Wiyot People. At the Planning Commission meeting of August 18, 2022, comments were made that were inappropriate and traumatic. First, we as a body unequivocally recognize that these were insensitive, racist, inconsistent with the values of the county of Humboldt, biased and understandably may have shaken your faith in the impartiality of this Commission. We further recognize that the comments added to past injury and injustices resulting from governmental actions. We as the Humboldt County Planning Commission recognize we not do enough to address the problem and so are all responsible. We understand this has damaged the relationship between the Planning Commission and the Wiyot people and that cultivating a positive relationship with the Wiyot people will require time and commitment.

We apologize for each of our roles in this event and ask for your forgiveness. If you would be willing, we would like to schedule a luncheon outside the Board of Supervisors Chambers to hear from you, grow in our understanding and seek restoration.

Thank you for your consideration.