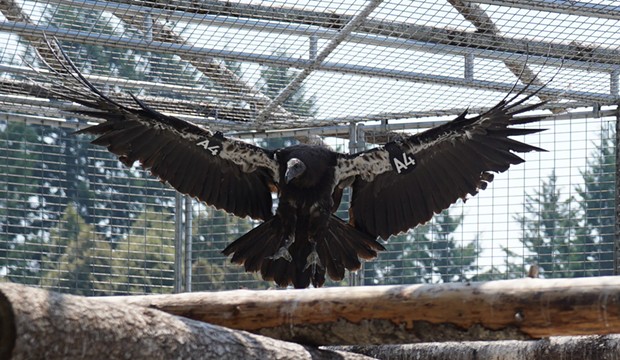 There are now six  California condors flying over the skies of Humboldt County after two more took their first forays into the wild today as part of a Yurok Tribe-led effort to return the endangered species they know as prey-go-neesh to the north reaches of its former territory.

The two birds —A4 and A5 — are part of a cohort of four that arrived on the North Coast in mid-August. The group’s sole female, A7, is being taken to the Oakland Zoo due to swelling on her mandible that has not responded to medication. The last, A6, is expected to be released in the next month.

The multi-step release process includes waiting for the now free-flying prey-go-neesh to be in the area of the release and management enclosure to help smooth the transition into the wild for the younger birds by acting as a “signal to the captive condors that it is safe to exit the flight pen.”

Then, a door from the main enclosure to a trap on the side of the flight pen is opened, which allows the birds access to the outside, if they choose to go.

“A4 was ready to go, waiting at the exit and barely hesitating before leaving the facility. He flew into the forest, and is under observation by our crew,” Yurok Wildlife Department Director Tiana Williams-Claussen wrote in a morning Facebook post. “A5 took a moment or so longer, but followed soon after, and seems to be seamlessly integrating with the previous cohort. This is exactly what we hoped to see, with time spent socializing through the facility wall paving the way for future friendships.”


A4 — described by Williams-Claussen as “a confident young bird” — has been nicknamed Cher-perhl So-nee-ne-pek', which she said means "I feel strong." A5 has received the name "Neee'n," which means "Watcher," for his tendency to take a “watchful approach, observing the world around him,” William-Claussen said. 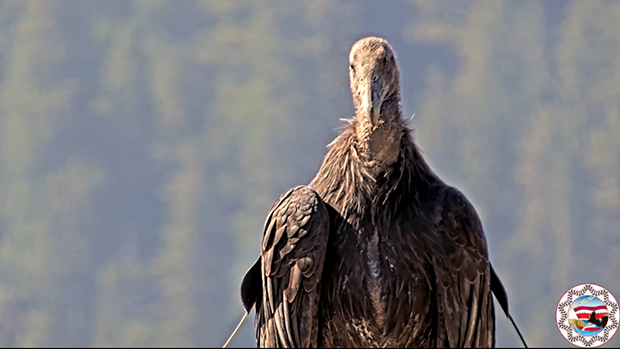 Those two now join four others — Ney-gem' 'Ne-chween-kah (She carries our prayers, A0), Hlow Hoo-let (Finally, I/we fly, A1), Nes-kwe-chokw' (He returns/arrives, A2) and Poy'-we-son (The one who goes ahead, “leader,” A3) — that took their historic flights in May and July, becoming the first of massive birds with a nearly 10-foot wingspan to do so locally in more than a century.

According to a Yurok Tribe news release, those first four are “thriving in the redwood region.”

Known as the Northern California Condor Restoration Program, the effort is a partnership between the Yurok Tribe and Redwood National and State Parks, which plans to reintroduce one cohort of prey-go-neesh every year for at least the next two decades.

The staggered release method follows the same one employed with the first cohort, which allows the NCCRP team to monitor how the condors are adjusting to their new surroundings while also helping to keep those flying free coming back, with the birds in the enclosure providing a “social draw.”

“We will keep you all updated on how Cher-perhl, Neee'n and A7 are doing,” Williams-Claussen wrote. “A6 will be next to be released, after we have had time to ensure Cher-perhl and Neee'n are adapting well to their new home.”


Read more about the condor restoration program in the Journal's June 23 cover story here and on the Yurok Tribe website here. (Just a note, when the story went to print A0 had been on a long sojourn but she later returned to the management and release site.)