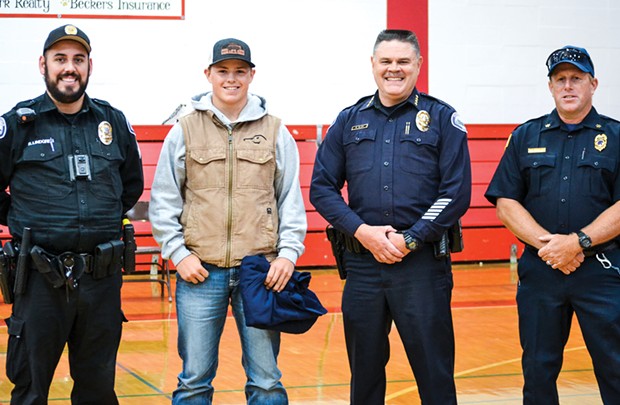 Recovering from a serious injury suffered in an Aug. 29 head-on car crash on Fernbridge, Monica Wells Anderson had one gnawing question.

“The only thing she talked about with me,” recalls Janet Coppini, a friend of Wells Anderson’s who spoke to her by phone from the hospital, “was that there was this person who climbed inside her vehicle and helped her. She wanted to find out who it was.”

This person had climbed into Wells Anderson’s crumpled car within minutes of the crash, talked to her kindly and calmly, helped stabilize her neck and didn’t leave her side for the close to an hour it took for paramedics and firefighters to get to the scene and extricate her from the vehicle.

And as a retired phlebotomist at Redwood Memorial Hospital, Coppini says Wells Anderson knows full well how much training and practice it takes to react that way in a critical incident.

So when Coppini circled back a short time later to tell Wells Anderson that person was 16-year-old Levi Dixon, who was on his way home from football practice when hit by the same car that collided with her, she was stunned.


“She was just shocked to learn his age,” Coppini says. “She said, ‘That wasn’t a boy, that was a man helping me.’”

“That’s kind of an advanced thing,” Sligh says, adding that initially personnel on scene assumed Dixon must be an off-duty or something and “just kind of left Levi there” as they worked to free Wells Anderson from the vehicle.

“They were assuming he was a professional,” Sligh says. “I’ve been doing this for 30-something years, and you show up on a scene and there’s adults just standing there watching people bleed. To see a young man like that just do it and do it so well, people assumed he was trained.”

Dixon says he was — in a combined education and health class.

Reached by The Enterprise after he was honored by Fortuna Volunteer Fire Department and Fortuna Police Department officials at a school assembly, Dixon — the son of Brennan and Sara Dixon — didn’t seem moved by the fuss.

“I just saw somebody who needed help and I’d taken a class about stuff like that, so I thought I’d help,” he says. “I don’t know, ya know? I didn’t think it was that important. I guess other people thought different.”

Dixon says he was on his way home from football practice, when, approaching Fernbridge, he saw a tractor in front of him, so he slowed down and turned his hazard lights on. Then, he says, he heard screeching behind him, felt impact and then saw the car that rear-ended him veer into the other lane, where it collided head-on with Wells Anderson.

He says he immediately got out of his car and went to check on the other driver. Realizing Wells Anderson was badly injured — her injuries were bad enough that she’s still recovering in an out-of-area facility — Dixon says he got in her car and leaned on what he’d been taught. He introduced himself, asked her name, told her she’d be fine and explained why he was stabilizing her neck.

Coppini says Dixon had a lot to do with Wells Anderson being calm, noting he talked to her, even as firefighters used metal saws to free her from the car.

“That’s pretty intense, and he stayed with her and gave her comfort, and she just said that he — even though she knew she was seriously injured — he reassured her and made her feel like she was going to be OK,” Coppini says.

Sligh says it’s clear Dixon has a natural capacity for the work.

“It’s the stuff we try to train first responders to do. Apparently, he was paying attention in health class,” Sligh says. “Gives you hope for the future, right?”

Editor's Note: This story first appeared in the Oct. 13 issue of The Enterprise.