Time to 'Fall Back' Once Again 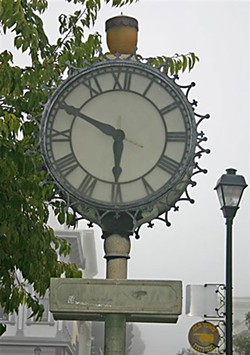 It's that time of year, again. When the clock strikes 2 a.m. Sunday, daylight saving time officially comes to an end and we all "fall back" an hour.

While Californians did vote overwhelmingly in 2018 to pass Proposition 7 to  permanently change over to daylight saving time, the measure still needs to be ratified by a two-thirds vote of the state Legislature. (A previous bill languished in the state Senate after passing in the Assembly.) And even if it did, California would simply join the ranks of a dozen states waiting for required Congressional approval to make the switch.

Health and safety concerns connected to ensuing interrupted sleep patterns, including an increase in traffic accidents and cardiac  issues, are among the most cited reasons for stopping the twice yearly back and forth of the clock.

We'll see what the next year brings. But, until then, don't forget to turn back the clock an hour tonight. And remember to check the batteries in those smoke detectors.