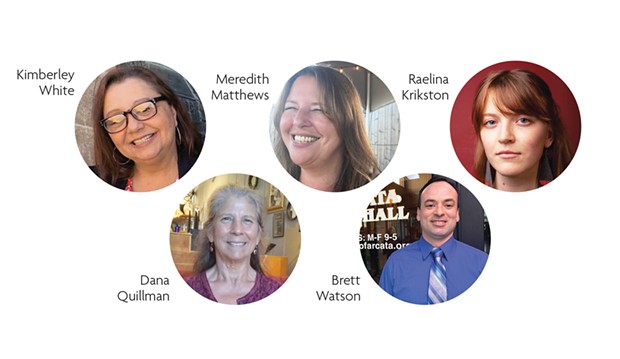 UPDATE:
With a field of six vying for two four-year terms on the Arcata City Council during a time of major transition for the city, incumbent Meredith Matthews and Planning Commissioner Kimberly White won easily, taking 32.33 percent and 30.11 percent of the vote, respectively.

The race spells the end of embattled Councilmember Brett Watson’s tenure, as he finished with just 9.36 percent of the vote and will leave office in December, about seven months after an outside investigation found he sexually harassed a city employee and abused his power as a council member.

Thousands of votes remain uncounted countywide, but we believe the leads amassed in Arcata are insurmountable.

Preliminary results show Matthews, who was appointed in 2021, ahead with 33.21 percent of the vote, while White, a program coordinator and community organizer for Comunidad Unida del Norte de Arcata/Community United of North Arcata, has 31.59 percent of the 1,361 ballots tallied thus far.

The two successful candidates will take up their four-year terms during a time of major transition for Arcata, as the city moves forward with the Gateway Area Plan review process and Cal Poly Humboldt proceeds with expansion plans, including a major influx of students.


In addition, the city and council are continuing to navigate an ongoing situation involving Watson, who was appointed in 2017 and elected to a full term in 2018. An outside investigation released in May found he sexually harassed a city employee and abused his power as a councilmember.

Watson has vehemently denied any wrongdoing and said he has been the subject of harassment by city staff.

Last month, a Humboldt County Superior Court judge granted the city’s request for a temporary workplace restraining order against Watson, which severely restricts his access to City Hall and prohibits him contacting or being within 100 yards of four city officials — with some exceptions made for council meetings.

A hearing on the order, in which the city cited safety concerns, was set for Nov. 4 but has been continued to Dec. 12. Watson is opposing the order.

If the votes continue on the current trajectory, Watson's current tenure on the council will end in December.