Another Shot at Freedom for Condor A6 Set for Saturday 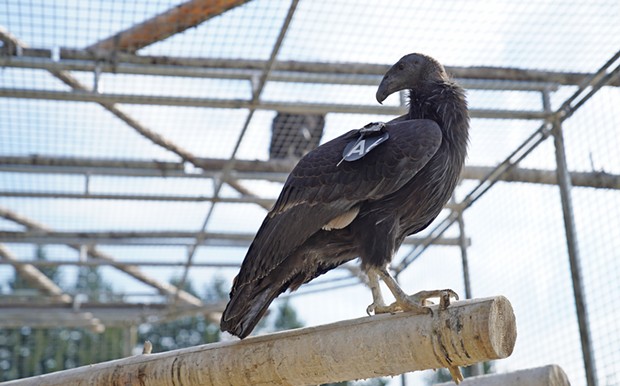 The Northern California Condor Restoration Program will try again Saturday to release the bird currently known as A6 after two previous attempts this week.

According to the NCCRP team, Thursday’s eight-hour effort was called off after A6 (and mentor bird No. 746) seemed hesitant to enter the trap area on the side of the main enclosure following A7’s successful release a day earlier, which had been planned to include A6  but he was "dawdling a bit," even with a lure of carrion inside.

“Currently, we plan to allow A6 and 746 to gain back their appetite by leaving the food in the trap unavailable through the rain (Friday),” a post on the Yurok Condor Live Feed page states. “We will allow access again on Saturday when the weather is supposed to improve and hopefully A6 will get a bit of a snack before his first taste of freedom!”

Meanwhile, the NCCRP team reports A7 "continues to do well and took several flights (Friday)."


"She has moved further from the release site, so hopefully she steers back that way soon," the team states. "As a reminder, both A3 and A0 took more than two weeks to return to the site after their respective releases, so we are not near worrying about her. At this time we are simply following her progress and making sure she is getting into good roosts each night. Our fearless field crew is hiking into her location before dawn and hiking out in the dark after putting her to bed each night. Keep them in your thoughts!"


A6 and A7 are the last of the four in a second cohort of condors that arrived in mid-August as part of the Yurok Tribe-led effort to return the bird they hold sacred and know as prey-go-neesh to its historic range after more than a century of absence.

A7 , who took off out of the enclosure at 2:30 p,.m. Wednesday, recently returned from the Oakland Zoo after recovering from minor surgery by vets there to remove an embedded bone fragment that caused an infection in her jaw.

A7 received the Yurok name He-we-chek', which means, "I am healthy" or "I get well," and joined four others — Ney-gem' 'Ne-chween-kah (She carries our prayers, A0), Hlow Hoo-let (Finally, I/we fly, A1), Nes-kwe-chokw' (He returns/arrives, A2) and Poy'-we-son (The one who goes ahead, “leader,” A3) — that took their historic flights in May and July, becoming the first of the massive birds with a nearly 10-foot wingspan to do so locally in more than a century — as well as Cher-perhl So-nee-ne-pek' (I feel strong, A4); and Neee'n (Watcher, A5) that were released last month.


A6's next release attempt can be viewed live on the Yurok condor cam, which can be found here: https://www.yuroktribe.org/yurok-condor-live-feed.

The NCCRP, a partnership between the Yurok Tribe and Redwood National and State Parks, plans to reintroduce additional prey-go-neesh every year for at least the next two decades, with the goal of acting as a gateway for the endangered species to spread up into the Pacific Northwest.