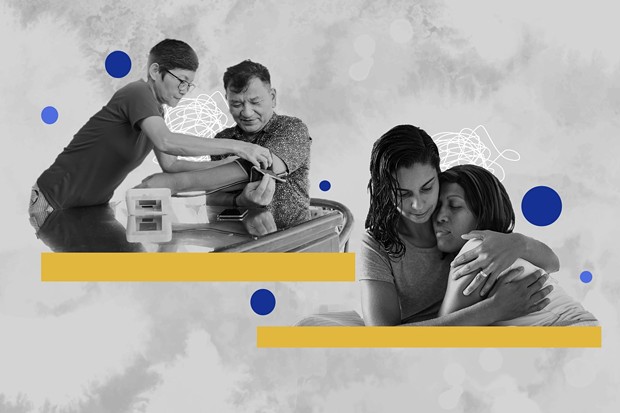 If you work in California and your sister is undergoing cancer treatments, or your spouse gets knee surgery, you might be able to get paid while you take time off work to care for them.

It’s a less well-known part of California’s paid family leave benefit, which also covers new parents who leave work to care for and bond with their babies. Although the number of Californians, especially women, using paid leave for reasons beyond new babies has soared in the past two decades, still roughly six times more use paid family leave to care for new children than use it to take care of seriously ill family members

While there’s broad support for giving new parents paid time off — a benefit that doesn’t exist across the U.S. — there’s less consensus around paid leave to care for ill family members. At the same time, research on the effects of paid family leave for anyone besides new parents has been limited.

A new study published today, though, finds that access to paid family leave decreases the likelihood that women leave their job if their spouse has serious health issues.

Researchers at Wellesley College and Stanford University looked at data for thousands of healthy, employed adults who had either a child undergoing surgery or hospitalization, or a spouse who had a health condition or a cognitive limitation and also had a major health event. They compared outcomes for people in California, New York, and New Jersey before and after those states passed paid family leave, and also compared them to people in other states that lack family leave.

Women with spouses who had health issues saw the largest benefit. While all women were working at the outset, after their spouses had surgery or were hospitalized, roughly 10 percent of women left their jobs.

But, the study found, access to paid family leave more than halved the rate at which they left work. “We were surprised at how big this effect was,” said Maya Rossin-Slater, a health economist at Stanford and one of the paper’s authors.

Rossin-Slater has seen the benefit play out in her own life: her mother has taken paid leave twice for family caregiving purposes. Once was about 10 years ago, when Rossin-Slater herself had surgery, and the second time was more recently to care for Rossin-Slater’s uncle, who had cancer. “In fact, she was going to retire but then she decided to not retire and instead use paid family leave,” Rossin-Slater said of her mom.

The study’s finding was concentrated among women with 12 or fewer years of education. Many women without college education work in low-paying jobs that don’t offer paid family leave benefits, Rossin-Slater said, so “in the absence of having a state-level program, these women by and large are left to kind of fend for themselves.”

Paid family leave didn’t have a meaningful impact on whether men stayed in their jobs if their spouses with a health condition had a major health event. Regardless of whether they had access to paid family leave, less than half of 1 percent of men in the study reported leaving their job to care for a family member or their home, Rossin-Slater said. “Just very few men do that, and so perhaps then it's not surprising that (paid family leave) doesn't really affect them,” she said.

Priyanka Anand, a health economist at George Mason University who has also studied the impacts of paid family leave, said she liked the research, particularly because it focuses on non-parental uses of paid leave, which has gotten little attention from researchers. There are strengths to the data the researchers used, she said, but one drawback is a relatively small number of people who actually had access to paid family leave: While more than 2,700 healthy spouses were in the sample, only 237 of them had access to paid family leave.

Some people are hesitant to take leave because they’re worried they might lose their job, or that they’ll be the first to go in future layoffs, or they’ll get passed over for raises or promotions, said Christina Irving, director of client services at San Francisco-based Family Caregiver Alliance.

In 2020, state lawmakers expanded job protections for people who take leave. Now, if you work at a company with five or more employees and meet work hour requirements, you can take unpaid leave to take care of a family member and be legally protected from losing your job. Previously, job protections generally covered people working at companies with at least 50 people at or near the worksite. Many people get both job protection and some pay during their leave, but the laws providing those two benefits are separate.

“Generally, folks are very concerned about how they can make sure that they keep their jobs,” said Katherine Wutchiett, a senior staff attorney at Legal Aid at Work, a San Francisco non-profit that provides legal services to low-income workers. “If they have a spouse who's facing a long term disability and will be out of work, they might be the sole source of income for their family for the first time, making it all that more important that they're able to keep their job,” she said.

Another barrier to getting paid family leave is understanding what you’re eligible for and how, exactly, to get the benefits. Legal Aid at Work runs a hotline for people who have questions about paid leave and other workplace accommodations, or need help with the process. It gets over 1,000 calls per year, according to Wutchiett.

Some version of paid family leave has been in place for nearly two decades. Yet, there's still a need for lawyers who can help people through the process, said Rossin-Slater. That reflects negatively on how the program is being run, she said.  “Ideally, people shouldn't have to turn to a lawyer in order to be able to just access this benefit.”