December 20, 2022
comment
Security footage of the quake shaking products from the shelves at the Eureka branch of Eureka Natural Foods.


State Sen. Mike McGuire reports via Twitter that $6 million in state funds has been secured for emergency repair on the more than 100 year Fernbridge, which serves as a vital link and is currently closed to earthquake damage. 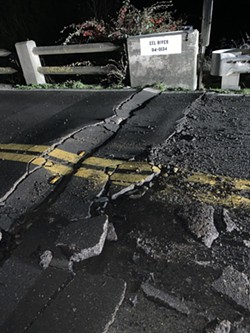 He also states that all “other state bridges and over crossings have been inspected and cleared.”

PREVIOUSLY:
As local officials continue to assess the damage from this morning’s 6.4 earthquake, it appears Humboldt County largely dodged a bullet, according to Sheriff William Honsal.

The temblor, which hit about 7.5 miles west of Ferndale at 2:34 a.m., caused widespread power outages throughout Humboldt County, with approximately 71,000 PG&E customers affected, according to the company. Shaking was felt as far east as Redding, and as far south as the San Francisco Bay Area, according to California Emergency Services Director Mark Ghilarducci.

Honsal said damage reports have been mostly centered in the Eel River Valley, with Rio Dell the hardest hit. Fernbridge was also seriously damaged in the quake and has been closed indefinitely.

The sheriff said there were reports of "entrapments" in Rio Dell.

"I have not heard of [structure] collapses but I've heard some people were trapped in their homes and had to be rescued," he said.

Preliminary reports indicate injuries have been limited, Honsal said, with about a dozen — ranging from minor to moderate — reported throughout the county. Additionally, the Office of Emergency Services reported two people died "as a result of medical emergencies occurring during and/or just following the earthquake."

Rio Dell officials have estimated as many as 100 families and 300 people may be displaced by earthquake damage, and Ghilarducci noted storms are in the forecast this week. Humboldt County OES is actively coordinating with the American Red Cross to establish a local assistance center for those displaced.

Honsal urged residents to inspect their homes, smelling for gas and looking for signs of water leaks, while also tracking main lines out to the road for possible damage. He urged continued diligence.

“Be prepared,” he said. “There will be aftershocks; there have been 70-plus since the initial jolt. Prepare for that 5.0-plus aftershock, which is definitely likely. I don’t think we are out of the woods yet.”

During a press conference this afternoon, state officials pledged to bring additional resources to the table where necessary, adding that state inspectors are already helping with damage assessments and inspecting local bridges.

"There is approximately a 13 percent chance within the next week of a magnitude 5.0 or larger, so people do need to be prepared, especially if they are in a weakened structure," Pridmore said.