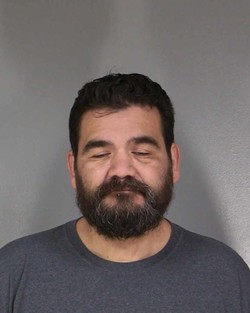 The Humboldt County Sheriff’s Office is searching for a man suspected in the shooting of four people at a Crane Street residence  this morning in the Pine Hill area of Eureka that left two dead and two wounded.

A 4-year-old child was at the scene but was not physically injured, according to a news release.

The suspect has been identified as McKinleyville resident Russell Martin Albers, 41. His whereabouts are currently unknown. If seen, residents are asked to call 911 to report his location. A double homicide warrant has been issued for his arrest.

Albers was arrested Oct. 30 on suspicion of battery against a spouse/cohabitant, according to the HCSO.

A 911 call was made at 12:12 a.m. today in which a child could be heard screaming and people yelling. While deputies were on the way, a report came in that there was a shooting, the release states.

On arrival, deputies reported finding three wounded, but a man and woman died at the scene. Another woman was taken to a hospital and underwent emergency surgery. The child was examined and placed in the care of Child Welfare Services.

The HCSO was later informed that another female gunshot victim was dropped off at a hospital by the suspect. She underwent surgery and is in stable condition.

Find the full release below:

On Dec. 27, 2022, at about 12:12 a.m., Humboldt County Sheriff’s deputies were dispatched to a residence on the 4000 block of Crane Street, in Pine Hill area of Eureka, in response to a 9-1-1 call in which yelling, and a child screaming were heard in the background.

While en route, deputies learned that there was a shooting at that location and at least one person was shot. Deputies arrived and located three persons with gunshot wounds at the residence. Life-saving measures were attempted, however, an adult female victim and an adult male victim had succumbed to serious gunshot injuries. Emergency Medical personnel arrived and rendered aid to an adult female and she was subsequently transported to an area hospital where she underwent immediate emergency surgery.

A 4-year-old child was on scene during this incident. That child was checked by EMS and determined to be uninjured. The child was subsequently turned over to Child Welfare Services.

Upon further investigation, deputies learned that was an additional adult female victim that sustained a gunshot wound at the Crane Street residence. The suspect dropped the female victim off at an area hospital. That victim underwent surgery and is in stable condition.

The suspect has been identified as, 41-year-old Russell Martin Albers of McKinleyville, CA. Russell Albers has an arrest warrant for double homicide. This case is still under investigation. More details will be released as soon as possible. Albers location is currently not known. If you see the suspect, call 911 immediately to report his location.