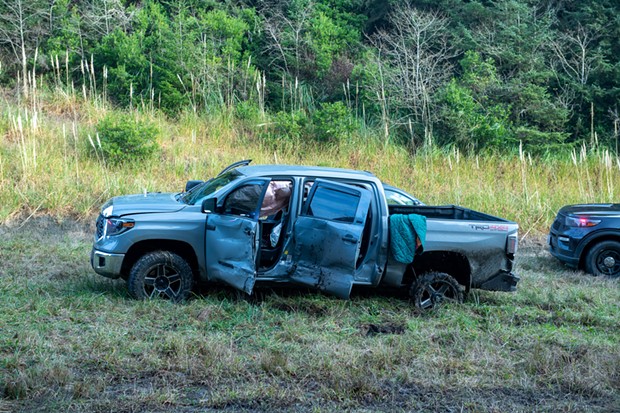 Russell Albers, the suspect in a Dec. 27 double-murder in the Pine Hill area of Eureka, was arrested today after a high-speed pursuit, according to the Humboldt County Sheriff's Office.

According to a press release, deputies were dispatched to the 1900 block of Pishka Court in McKinleyville after someone saw Albers there. As deputies arrived, he was seen leaving the area in a gray Toyota Tundra and a pursuit ensued, with Albers allegedly reaching speeds in excess of 100 mph as headed north on U.S. Highway 101.

Albers allegedly led deputies along Scenic Drive south of Trinidad, through Trinidad and then back onto U.S. Highway 101, where he at times drove north in the southbound lanes at high speeds. Ultimately, California Highway Patrol officers were able to force Albers' vehicle off the roadway, where another rammed it and immobilized the truck. Albers was then arrested without further incident, according to the release.

He was then booked into jail on suspicion of two counts of murder, two counts of attempted murder and one count of child endangerment.

Police had been searching for Albers since shortly after midnight Tuesday, when deputies were dispatched to a report of a shooting that killed two people and wounded two others with a 4-year-old child present.

On 12/28/2022, at about 1:46pm, Humboldt County Sheriff’s deputies were dispatched to the 1900 block of Pishka Court in McKinleyville for the report of a sighting of double homicide suspect Russell Albers.

Albers was subsequently transported and booked into the Humboldt County Jail for two counts of homicide (PC 187), two counts of attempted murder (PC 664/187) and child endangerment (PC 273a).

The Humboldt County Sheriff’s Office would like to thank the following agencies for their coordination and assistance with this pursuit: California Highway Patrol, State Parks, Bureau of Land Management, Eureka Police Department and Cal Poly Humboldt University Police Department.