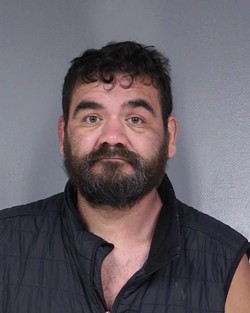 According to Humboldt County Sheriff William Honsal, Russell Albers’ girlfriend had made the decision to leave him and their abusive relationship behind.

Speaking to the Journal the day after Albers was arrested on a double murder warrant following a 15-mile high-speed chase about 36 hours after he is alleged to have shot four people at a Pine Hill home, Honsal provided new details about the shootings that left two people dead, two injured and a 4 year old without her parents.

Albers’ girlfriend, Honsal said, left him several days before the shootings, around Christmas Eve, and went to stay with her sister, Jennifer Paddock, 42, her sister’s boyfriend, Daniel "Danny" Garcia, 51, and their 4-year-old child, at their home in the 400 block of Crane Street, in the Pine Hill neighborhood south of Eureka.

“Our victim basically fled and sought refuge — she was in an abusive relationship with this guy, based on their history, and was wanting to separate herself and start a new life,” Honsal said, adding it’s unclear how, but “the suspect ended up finding out where she was.”

When Albers arrived at the residence, Honsal said his girlfriend agreed to come out on the porch to speak with him. The two talked a bit, the sheriff said.

Garcia and Paddock, shot in the abdomen and chest, respectively, were pronounced dead at the scene. Honsal identified the other victim as a family friend who just happened to be at the residence.

The Humboldt County Sheriff’s Office received a 911 call from within the residence at about 12:12 a.m. All dispatch could hear initially was an open line, with yelling in the background and a child screaming. Honsal said he believes this call was made by the family friend, who didn’t speak because she didn’t want to alert Albers to the fact that she was still alive.

About this time, Honsal said, according to witness statements, Albers was forcing his wounded girlfriend into his car.

“He transported her around Eureka for a bit, and then dropped her off at Mad River Hospital,” the sheriff said, declining to say specifically what Albers and the victim spoke about during the drive other than that the girlfriend told investigators she pleaded with him to take her to the hospital.

According to a HCSO press release, when the girlfriend was dropped off at Mad River Community Hospital — a 23-minute drive from Crane Street, absent detours — she underwent surgery to treat the gunshot wound.

Exactly where Albers went from the hospital is unclear, Honsal said, noting that the gun used in the shootings has still not been located. The HCSO put out a press release about the shootings later that morning, naming Albers as the suspect and encouraging anyone who saw him to immediately call 911. The press release included a photo of Albers, taken when he was booked into jail at 2:02 a.m. on Oct. 30 on suspicion of domestic battery.

That arrest involved the same girlfriend Albers is alleged to have shot, Honsal said, adding that when deputies responded to the call, she told them Albers had assaulted her, punching her in the face. Because there was no injury visible, Honsal said Albers was arrested on suspicion of misdemeanor domestic battery.

But no charge was ever filed in the case.

Humboldt County District Attorney Stacey Eads, who took over for predecessor Maggie Fleming earlier this month, said prosecutors felt there was insufficient evidence to prove a crime occurred beyond a reasonable doubt, saying there was no evidence to corroborate Albers’ girlfriend’s statement, which she later “recanted.” Eads said the sheriff’s office then requested she be charged for making a false police report but her office declined to file that charge, either. 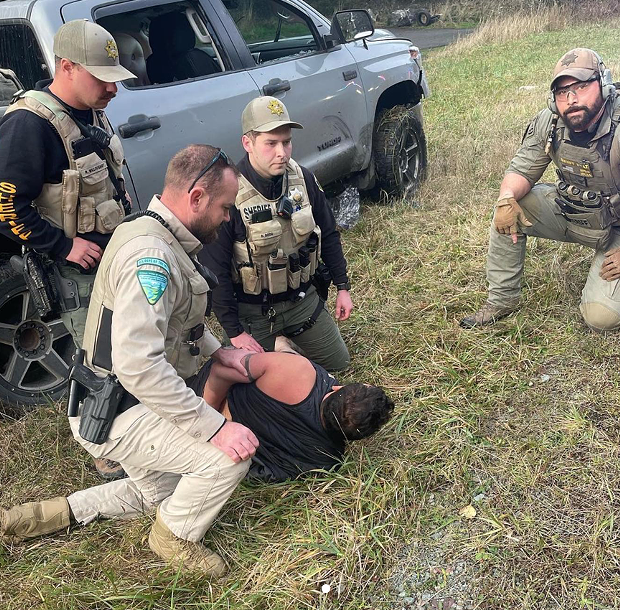 Honsal said his department was actively searching for Albers when a citizen called at about 1:45 p.m. on Dec. 28, saying they’d seen him and his Toyota Tundra truck on Pishka Court in McKinleyville. Deputies responded immediately and one caught sight of Albers getting into his truck and leaving the area, sparking the more than 15-mile high speed chase that ended when California Highway Patrol officers ran Albers’ truck off the road and rammed it until it was immobilized before officers took Albers into custody without further incident.

Honsal declined to give details about what Albers had been doing on Pishka Court, but said he “was not being harbored, let’s just say that.”

While relieved law enforcement was able to bring Albers into custody before he caused further harm, and that no one was hurt in the chase, Honsal said this case is simply tragic and has taken a toll on all involved.

“We are all just deeply affected by this 4 year old who is without her parents, the loss of life and the two lives that will be forever changed by this,” he said. “Our heart breaks for the situation all around.”

Attempts to reach Humboldt County Domestic Violence Services for this story were unsuccessful. But in previous interviews with the Journal, experts said it’s important for the community to understand that abusers are often very adept at manipulating the person they are harming and using specific tactics to exert power over them, to control them and keep them in the relationship.

It’s an epidemic that is especially acute in Humboldt County, which historically averages about 50 percent more domestic violence-related police calls per capita than the state average, with more than 40 percent involving some kind of weapon. Humboldt County District Attorney Investigator Lynn Soderberg, a more than 30-year veteran of law enforcement, previously told the Journal that while many look at domestic violence cases with tragic outcomes and ask why the victim didn’t just leave or cooperate with authorities, she says that’s unproductive and misses the point.

Soderberg also noted that batterers can be come more abusive if they feel their control over their victims slipping, making separation a sometimes terrifying prospect.

“It’s also very dangerous for victims to leave,” she said. “That’s one of the most dangerous times for a victim because that’s when the power and control is being lost. And someone participating [in a prosecution] is akin to leaving.”

North Coast Rape Crisis Center Community coordinator Paula Arrowsmith-Jones also pointed out in a previous interview with the Journal that abusers are often very adept at “zeroing in on the vulnerabilities” of the person they are harming and using specific tactics to control them and keep them in the relationship. In many cases, the perpetrator and the victim also have long histories together, sometimes with children, mixed finances and overlapping social circles.

“Lives get entangled,” she said.

Honsal said Albers’ case is a horrible example of the cyclical nature of domestic violence and he hopes people in violent, abusive situations know that help and resources are available.

“I just urge people to call, seek help,” Honsal said. “There’s places for victims of domestic violence to go. And once you leave, don’t look back. Things won’t change. It’s a cycle. This is just a horrible, horrible event.”