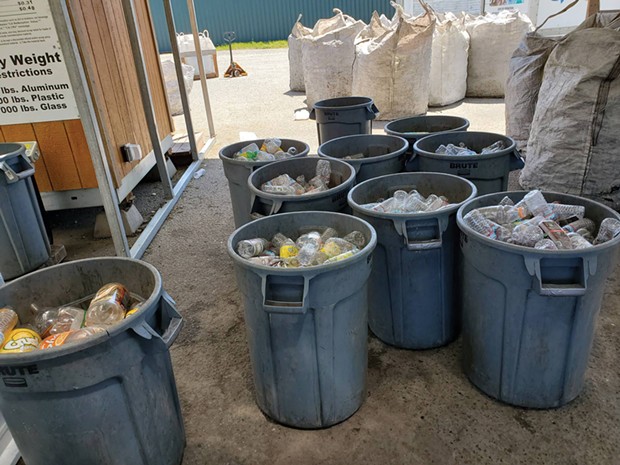 The Fortuna Planning Commission has approved a conditional use permit for Hambro Recycling to open and operate a California Redemption Value (CRV) recycling buy-back center in the Friendly City, providing a service closer to Southern Humboldt residents who currently have to travel to Arcata to sell their CRV recyclables.

"We had a booth at the Humboldt County Fair this past year and heard from a lot of people from outlying areas (of the county) that they weren't able to go to Arcata and sell their CRV because of gas prices getting so high," Randy Scott, general manager and vice president of Hambro Recycling, told the Journal. "We're all excited. We want to get a (CRV) recycling center to where the people are."

Last April, Hambro Recycling of Crescent City opened a CRV buyback center in Arcata, two years after the Humboldt Waste Management Authority discontinued its CRV services at the Eureka Recycling Center due to safety concerns after an overload of residents wanting their CRV deposits back in September of 2020.

Scott said if all goes well with the city of Fortuna in the coming days, Hambro hopes to open the Fortuna CRV recycling center by Feb. 1.

The site would sit on 591 Main St., Fortuna (at the southwest corner of Sixth and Main streets) and would be open Wednesday through Saturday from 9 a.m. to 5 p.m., with two staff members operating the recycling center at all times.

According to Liz Shorey, Fortuna's deputy director of community development, there would be no bailing or crushing of recyclables on the site, it would just be a drop-off site for Hambro to transport recyclables to another processing facility.

During the meeting, Mobley said he'd work in the recycling industry for the majority of his life and didn't think Hambro's CRV recycling center's business plan would work very well.

Mobley was specifically worried about the location of the site, the recycling center's staff and the potential impact of traffic off of Main Street from the number of residents coming to sell recyclables.

"I see a lot of issues coming down the road looking at this and the location that you've chosen, in my opinion, is just not the greatest," Mobley said. "Being that close to Main Street, with all the other issues like homelessness and ... everything with having a buyback center it just looks like more problems."

Other commissioners said they worried about trash and shopping carts left behind at the site. Scott told the commission Hambro would return shopping carts, if necessary, and clean the site to make it as if they "were never there."

Hambro Recycling operates recycling centers in Crescent City and Arcata, and thanks to a California Department of Resources Recycling and Recovery (CalRecycle) grant, will be operating a pilot-program CRV recycling center in Willow Creek and Redway for a limited time. Scott told the Journal he expects to get those to be operational in 45 to 60 days.

In the meantime, Humboldt County residents looking to recycle their CRV recyclables can head to Hambro Recycling's Arcata recycling center at 420 South G St. in Arcata. It's open Tuesday through Sunday from 9 a.m. to 5 p.m.