An odd thing happened while out sifting through the coastal night light for a compelling image. The waxing crescent moon had already set and the night was dark. My brother Seth and I walked without lights through the night along the beach, each step something of a leap of faith as only faint differences in the darkness revealed the sandy contours before us.

Presently a lighter object emerged from the shadows on the ground ahead, its dim form sliding slowly toward us as we walked. It was probably trash, I thought, remnants of a sunny day’s activities thoughtlessly left behind. I nearly kicked at it to ascertain its composition, but was spared that folly as my brother flicked his light on to reveal the lifeless form of some kind of ray.

White and pasty, it lay on the sand with its tail still in the waters of Little River, apparently left high and dry by the receding tide. Its smell told us it wasn’t freshly deceased. Hideous was a word that came to mind but these bat-like sea creatures had always fascinated me. Could I get a photo of this, I wondered? But the smell rose again and we moved on.

But later, after shooting the scene I’d come out to photograph, I changed my mind. I should commemorate it, I thought, honor its life. It was the day we’d lost Supreme Court Justice Ruth Bader Ginsberg and here was this lifeless form washed up on the beach. I felt I should stop; perhaps there was a way to find the beauty in the end of its life and pay the old critter its due respects. 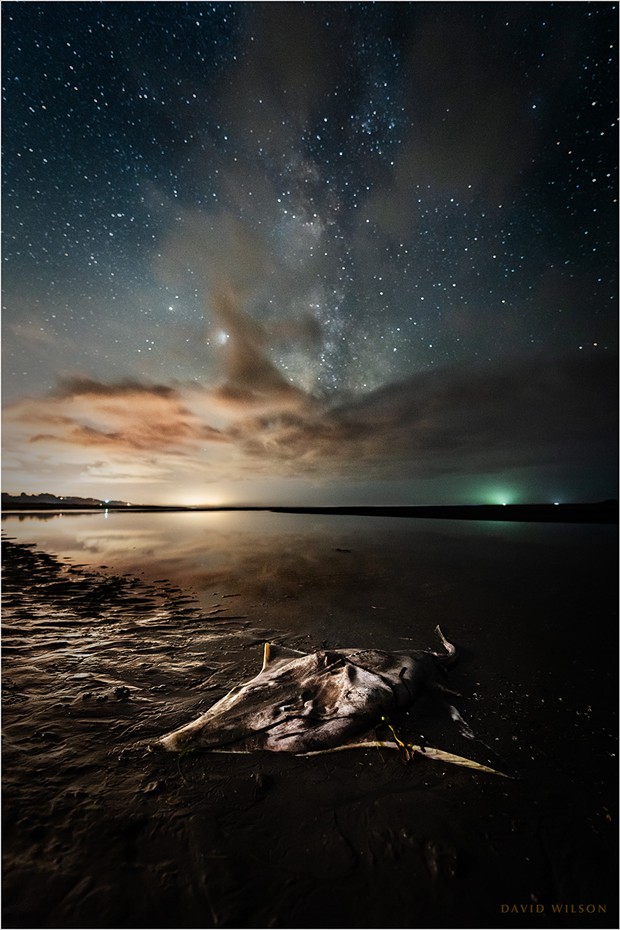 What is in a moment’s perception? What at first I had thought was litter, upon closer examination became the smelly lifeless body of a dead sea creature. And after reflection, it transformed again to something I wanted to honor and memorialize, though I didn’t yet see in my mind’s eye how to make an interesting photograph of it. So we stopped on our way past it again to try. And something beautiful rose out of an object I had thought was only trash.

To keep abreast of David Wilson’s (he/him) latest photography or purchase a print, visit www.mindscapefx.com or follow him on Instagram at @david_wilson_mfx.