Aaron Charles Jackson, of Eureka, Cali fornia, passed away suddenly on Sunday April 4, 2021. Aaron was born on June 4, 1985 at Mad River Hospital Arcata, California to his parents Judith and Jerry Jackson. Aaron was raised in Eureka, and named after his grandpa, Charlie Marsh, whom Aaron was very fond of and close with as a child. Aaron loved growing up in a small town during his childhood with his older brother Shane Jackson and baby sister Alycia Jackson. He was popular and often knew every kid on the block. Much like Aaron, his childhood was never dull. He was full throttle with everything and didn’t know the meaning of “slow down” or “you can’t do that.” His response would often be “WATCH ME.”  He often instigated fun adventures like a ride in the wheel barrel tied to a go cart, with Shane and Alycia watching, laughing or driving. His full throttle personality was known to all, and would back fire at times. Aaron broke his collar bones five times as a kid, you could say he was fearless. Aaron was a momma’s boy through his life; however, he liked to share his love with pranks and scaring his mother daily with fake cat poop, puke, rats and snakes, with his dad not far behind with the video camera catching all things Aaron in action. The childhood memories in his neighborhood were the best a kid could ask for. Most of the kids Aaron and his siblings grew up with became lifelong friends. Aaron was always the lively one thinking of fun things to do, including paintball guns and dirt bikes with his friends in elk river. Aaron was two years older than his baby sister, Alycia Jackson. They were close growing up, with Aaron being the middle child, and Shane, his older brother by two years were the best of buds. They shared many fun memories like skiing and snowboarding at Shasta every winter. During summers, Aaron spent most of his time at Trinity Lake with all the Jacksons and Vallees, staying at pinewood cove and the Jackson cabin. Spending summer days on the ski boats of his parents and his cousins water skiing, tubing and jumping off the leaky tikki patio boat. Aaron was close to a pro at tubing during those years. He loved to battle Shane on the tubes, anything that goes fast, and soon enough he got his sister to do it with him. She learned from the best, often looking up to her brother like he was superman!


From snowboarding, wakeboarding, rollerblading, ocean fishing, dirt bikes, skateboarding, paintball guns, hunting bear, turkey and deer up at showers pass, and more. He did it all and was good at all of it. His middle name should have been FULL THROTTLE. 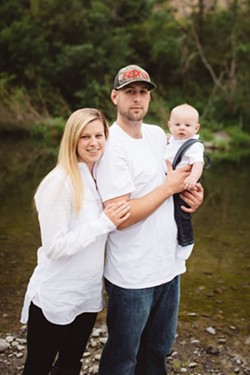 Aaron enjoyed life and it was filled with so much family and friends. Aaron spent his last 15 years in love with Melissa McNeese and raising their son, Tanner Charles Jackson, age 5. He loved to prank Melissa on the daily, for he did love to keep things exciting and fun in their life. They both loved fishing and camping at Ruth lake together. Aaron and Melissa loved each other very deeply since a young age.

Aaron loved being a father. Tanner and Aaron would do all the manly things together, for Aaron wouldn’t have it any other way. Building their chicken coop, fixing the fence, fishing in the bay, and accidentally catching seagulls. Aaron liked to spoil Tanner with farm animals and would let him have his goat and chickens come inside to play with him, which Melissa was not too fond of cleaning up the mess. Aaron’s absolute favorite was taking Tanner hunting with him up to showers pass with his step dad at the hunting cabin. This was one of Aaron’s favorite places. The last hunt Aaron and Tanner shared was a turkey hunt up at the cabin with his step dad, also known as grandpa Burt.

Aaron developed a great work ethic in his adult life. He was a local roofer for 10 years, worked for a tree service, more recently a commercial fisherman and sport fishing in his ocean boat. He was good at all the things he put his mind to. He was talented with his hands and worked hard for everything he had.

Aaron’s smile could brighten any day. His laugh was contagious, the Aaron Jackson laugh as we all knew. Aaron also had a kind soul beneath his fearlessness. He sadly suffered from anxiety and depression for many years in his teens and adult life. When it came to family functions and events he was always asking his mom and dad, “Is Alycia going to be there, is Shane going to be there?” He wouldn’t go unless they were there, for he felt at ease with his siblings around him. The grief of losing Aaron will be lifelong for all of us, for he was so loved and so close with his family.

A celebration of Aaron Charles Jackson's life will be held at Fortuna River Lodge on June 13. Doors will open at 4:30 p.m. This will be open to all his family and friends. Any friends and family that have pictures, please contact Alycia Jackson on Facebook. We do advise all who plan on attending be either fully vaccinated or have a negative covid test within days of attending. Any memorial donations are much appreciated. Please contact Alycia Jackson on FB to do so.