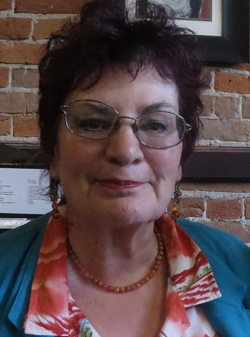 Yvette Jean Tucker passed away peacefully at her home in Eureka, California on April 21, 2021. Yvette will be remembered for her kindness and her gentle soul. She was a loyal friend that could be depended upon anytime, night or day. She was always there to help her fellow human beings and she had a special affection for her furry friends. When your birthday came around, you could always expect a singing telephone call.

Yvette was born in Sacramento, California, on Aug. 21, 1946, to Mayo Lydia Deluis and Eugene Williamson. She graduated from Bishop Armstrong High School in 1966. She earned a degree from Sacramento City College and was a Brown Belt in Kenpo Karate. At the age of nineteen she married Richard Tucker, they had a child together in 1968. In 1974, Yvette and her young son, Sam, moved to Humboldt County. Yvette found relief in the cool weather that she encountered on the coast. She spent the rest of her days living in bliss behind the redwood curtain.

She began her working career in Humboldt at the Little Ponderosa Cafe in Rio Dell. Next, she served the diners at the elegant Scotia Inn restaurant. Then she spent fifteen years as an administrative assistant at College of the Redwoods where she volunteered to be a union representative for her colleagues. Yvette was a team player. Upon leaving College of the Redwoods, she transferred to the Humboldt County Planning Department. Yvette developed many friends in her workplaces, some of whom she continued to have relationships with after retirement. She was an enthusiastic volunteer at Tail Wagger‘s Thrift Shop in Eureka supporting the Humboldt Humane Society.

Yvette was an active vendor in the monthly flea market events at the Redwood Acres Fairgrounds. She had a special interest in homemade crafts and beautiful one-of-a-kind items. You could often find Yvette behind her 'flea' table crocheting. She loved to give away her creations to those in need. She had a great fondness for the people and the camaraderie at the flea market.

To think of Yvette is to remember her infectious laughter. The ring of her 'mirthful cackle' is echoing in the hearts of her loving friends.

Yvette was preceded in death by her brother John Williamson and is survived by her son Samuel Tucker, her nephew Erik Williamson, his wife Teresa, and their children Erik Pettitt, Kyrsten Lenore Williamson and Steven Rondone Williamson.