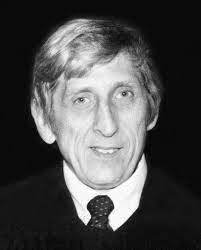 John was born in Salem, Oregon, on July 6, 1941. He was raised in the Willamette Valley, attending River Road Elementary School, Colin Kelly Junior High, and South Eugene High School, where he co-captained the football team. In 1960, John attended the United States Merchant Marine Academy at Kings Point in Long Island, New York, graduating in 1963. He served in the Pacific for three years during the Vietnam War with the United States Navy as a lieutenant navigator on the USS Kawishiwi. His experiences on this tanker ship in the Gulf of Tonkin on Aug. 2, 1964, a moment which led to the conflict in Vietnam, deeply influenced him. After release from active duty in 1966, he entered the University of California Hastings School of Law in San Francisco, California, receiving a Juris Doctorate degree in 1969.

Having successfully passed both the California and Oregon bar exams, John began practicing law in Portland, Oregon, in 1970. In May of 1971, he accepted a position as Humboldt County deputy public defender, serving under William Connell and moved to Eureka, California, where he settled for 32 years. John always felt fortunate to have worked for Mr. Connell, who trusted that an inexperienced attorney could quickly adapt to the courtroom routine. In 1973, he accepted an appointment as the city attorney of Arcata, California, while maintaining a private practice. In 1974, John won the race for district attorney, pushing him into the public eye. In 1978, Gov. Brown appointed John a judge of the Municipal Court in Humboldt County. In 1980, he was elected judge of the superior court, where he served for 21 years.


John was an avid model train builder and collector, inspired by his father’s career as a switchman for Southern Pacific Railroad. Over the years John built several dioramas including handmade wood stations which he meticulously created with his photographs of original train stations—long since obsolete teepee burners throughout the Pacific Northwest. He often conducted this research during family vacations, which naturally played a role in some of the day trips or mysterious destinations.

During the 1980s, John ruled on several major and impactful court cases. The first involved a widely publicized capital punishment trial, and the second included a series of rulings which ultimately prevented the Pacific Lumber Co. and Maxxam Corporation from clear-cutting an ancient redwood grove, Headwaters Forest Reserve. This was the last privately-owned old growth forest in the country. His rulings ultimately drove the land acquisition by the federal government, and a Congressional Designation of the 7,472 acre reserve. In the evenings, John could be found with a stack of yellow legal pads, researching case law and writing many of his opinions, surrounded by model trains.

John is especially remembered for his leadership of the child advocacy movement in Humboldt County, insisting on independent representation for minors in dependency and contested custody cases. He was instrumental in starting a local CASA and a nonprofit advocacy center for children.

John was well loved by his staff and never missed an opportunity to mentor those with whom he worked. He was always highly regarded throughout Northern California, and during his many years of public service always sought to balance his belief in justice with fairness.

When John retired from the bench in 1999, he worked as the director of the Center for Child Advocacy in Eureka, California. Eventually, John and Georgia moved to Austin, Texas, where he served as an administrative law judge. He resumed his work for children, serving as Guardian Ad Litem for Travis County Courts. He also worked tirelessly for blind and vision impaired veterans.

Although John enjoyed his work, he treasured time spent with family and friends and travels with Georgia to national parks and to historic monuments and other places of interest, especially enjoying trips to Cambridge and Louisville. John spent a lifetime involved in personal pursuits: an avid interest in history, especially the Civil War, his train modeling and his own family’s history which he researched exhaustively. He fulfilled a lifelong dream of traveling by train across the U.S. and Canada, and was thrilled to officiate at the wedding of his son, Justin.

John’s life was defined not just by his accomplishments but by what he overcame daily for most of his adult life — debilitating pain. John suffered crippling rheumatoid arthritis and only the most focused and determined among us could have walked in his shoes.