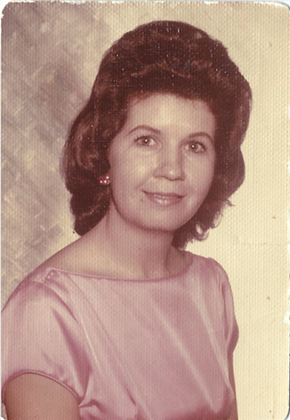 Doris Yvonne Gocha was born on Oct. 8, 1937 in Houston, Texas, to Bessie and Harry Robertson. She was the middle sister to Cova (Vernell) and Patricia, and had a brother, Jesse. Her family moved around a lot when Doris was young and lived for a time in White Sands, New Mexico, where Harry helped build scaffolding to hold the newly developed atomic bomb. Doris had memories of living on a military base there and how her father witnessed the testing while wearing goggles and standing inside an open bunker. The family continued to move around and eventually headed west and settled in California.

Doris was a talented artist, even at an early age. She told the story of how she had loved reading Archie Comics and that when there was an art contest for its new Katy Keene series, she entered her drawing and won. She was disappointed, however, that she was never able to find a copy of the comic book with her winning drawing in it.

In 1956 Doris married George Gocha. They had three children together, Timothy, Deborah and James. The family enjoyed many happy times while living in Granada Hills, an L.A. suburb that still held citrus groves and working farms. Special family outings included jumping into the station wagon in the evenings and going to drive-in movies, all the kids wearing pajamas and eventually falling asleep in the back of the car.

During the hot summers, trips to the beaches of southern California were common. George would drive the family down the coast, meeting up with other family members from Oceanside, including his parents, and his siblings and their kids. Pictures show very young families, and one of Deborah with her father around the time she almost drowned in an undertow. She had been saved first by her grandmother trying to grab her and then by her father finally pulling her from the ocean and onto the beach.

The family went on several camping trips, including one to Yellowstone. Doris remembered once returning from the camp bathroom wearing face cream and curlers, only to find a deserted campground because a bear was seen roaming around and everyone had been told to get into their tents and campers. The family was panicked and yelling for her to hurry inside the little camper, which she finally did. She later said she had nightmares where a bear was chasing her and when she got to what she thought was the safety of a house and tried to open the front door, the door was always locked.

The family suffered a blow when young James one day began choking and couldn’t breathe. His siblings were with him and alerted their parents, who rushed James to the emergency room. Though he turned blue on the way to the hospital, once there, the doctors were able to save him.

Happier times for the family included occasional trips “over the hill” to rural Newhall, where Doris’s sisters and their families lived. The kids ran wild outside well into the night, exploring the canyons and dry creek beds. George, despite having experienced hearing loss during the Korean War, joined the other men inside playing instruments and singing country songs. Doris and the other ladies sat at a nearby table, listening to the lively music while playing Yahtzee and drinking soda pop.

Doris loved music, especially country music. She and George had once met singer Eddy Arnold, a favorite, and were so taken with him that they named their first son Timothy Arnold. Doris also loved Elvis, Johnny Cash, Marty Robbins and Jim Reeves. And just to mix things up, she said she enjoyed listening to Creedence Clearwater Revival, a rock band.

Doris continued to draw and paint throughout her life, eventually turning to oils, a creative practice she found fulfilling. She also loved reading, regularly visiting local libraries and checking out as many books as she could carry.

George and Doris eventually divorced and Doris went on to work in accounting offices, primarily. She did her best to raise three teenagers on her own while working full time. She had grit and was very stubborn. Those traits helped her through the rough times in her life, but were also sometimes a mixed blessing for those around her. Her family joked that her stubbornness was what kept her going. And it did keep her going for more than eight decades. She died peacefully with her loved ones around her on July 30, 2021 in Lancaster, California.

Doris was proceeded in death by both of her parents and all of her siblings, as well as her son, James and her son-in-law, Jerry. She is survived by her son, Tim (Linda) and daughter, Deborah; her grandchildren Emilee (Kenny), Matt, Chris (Jessica) and Carson; her great-grandchildren Emma and Theo; and numerous nieces and nephews.

Doris will be laid to rest near her family. In lieu of flowers, and in her memory, we encourage everyone to gather and record family memories with your loved ones while you still can. We all have our stories to tell.