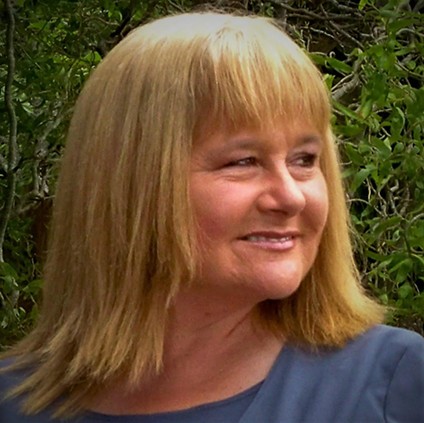 Laurie was born to Jessie Pawlus-Wheeler and Michael Bruce Wheeler on Nov. 23, 1964, in Petaluma, California. Her birth fell on Thanksgiving, so her first birthday/Thanksgiving celebration was hosted by Hillcrest Hospital. She left us on Sept. 5, 2021, from COPD.

Laurie attended Gravenstein and Twin Hills grammar schools in Sebastopol and graduated from Analy High School in 1982, maintaining a 4.0 average all the way through. She was active in 4H and band, playing a clarinet and participating in all the marching band events. Following high school, she studied design in Sierra College, Citrus Heights.

Her parents returned to Humboldt County in December of 1982, and Laurie helped with the move during her Christmas break. Graduation from Design School came in 1984 and was attended by her grandmother, Laura Pawlus, and her mother, father, and Brother Michael with wife, Tracy.

After graduation she worked for a firm in Sacramento. Her first achievements in that area were designing a Safeway store and a Longs Drugstore. Moving back to Humboldt County she was employed by Baird Engineering in Fortuna and later by Omsberg Engineering in Eureka. During this time she re-designed the façade of the grocery store on Main Street in Fortuna which, for a while, housed the Co-Op. She also designed an addition to the Bridgeville Baptist Church, as well as a beautiful home for her friend Liz.

She married Daniel Graben of Eureka and in 1995 had twins, Lauren and Dillon. Laurie and Dan lived locally for a few years and then moved to Vancouver, Washington, where Dan worked in construction, Laurie worked in Safeway, and the children were in the Young Marines. When the marriage ended, Laurie, Dillon and Lauren came back to Humboldt County to live at home with her mom for a while.

From that time on she and her children were on their own, and they did a great job of it. She was involved in everything her children wanted to do and was there for them no matter what. This included band, baseball, soccer and other events at Zane Middle School, and ROTC at Eureka High. She was a volunteer at St. Joseph Evergreen Lodge for a long time. She loved her volunteer supervisor, Jennet and made good friends there.

Laurie attempted to upgrade her education in design at College of the Redwoods, but unfortunately pain from an old back injury and COPD prevented her from continuing this path. Laurie was a loving, wonderful mother and a kind and loyal friend, she will be in our hearts forever.

She is survived by her mother, Jessie Wheeler of Eureka; Aunt Barbara Tryon of Fort Dick, brother, Michael Bruce Wheeler Jr, retired USN, and his wife Susan of Texas; and sisters Wynell Lamareaux, of Oregon, Karen Wheeler and Donna Wheeler of Nevada; children, Lauren Graben, of Arizona and Staff Sgt. Dillon (Ashley) Graben of Fort Eustis, Virginia; nieces, Jessica Wheeler of Eureka, Mellissa Bruce and Nicole Wheeler of Texas; and great-nieces Chelle Temple of Nevada and Lauren Stewart of Arizona. A memorial will be held at a later time.