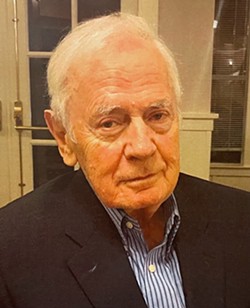 Samuel P. Oliner passed away on November 17th, 2021. He was born in Zyndranowa, Poland, in 1930. Zyndranowa was a farming village in southern Poland near the Czech border in the Carpathian Mountains.  He lived on the small farm belonging to his grandparents Isak and Reisel Polster, together with his parents and siblings. Sam was left orphaned by the barbarity of Nazi-occupation during World War II, aided in his survival by a Polish family who risked their lives to rescue him.

After the war, Sam immigrated to England where he began his formal education at Bunce Court School in Kent in 1946. In 1950, he made his way to New York City with the help of relatives. Shortly after his arrival in America, Sam was drafted into the U.S. Army and served in the Korean War (Bronze Service Star, National Defense Medal, Presidential Unit Citation). While attending Brooklyn College on the G.I. Bill upon his return from Korea, Sam met Pearl Merkur on a blind date arranged by his best pal Fred Knauer. Sam and Pearl were married in 1956 and for 65 years before she passed earlier this year.

In 1957, Pearl and Sam packed their U-Haul truck and headed for California. They each received a PhD from the University of California at Berkeley, and together they became professors at Humboldt State University. Sam was chair of the Sociology Department, and by all accounts much beloved by students, staff, and colleagues during his 30 years as a professor. In 1973, he founded the Humboldt Journal of Social Relations, which remains in publication to this day. Sam and Pearl founded the Altruistic Personality and Prosocial Behavior Institute at HSU.  Together, they were awarded HSU’s Scholar of the Year prize in 1990. Sam has authored nine books and numerous other publications focusing on the subject of altruism and why some people risk their lives to help others.  He published his most recent literary work this year, at age 91. A central theme that runs throughout his scholarship is the importance of kindness and courageousness, even in the darkest times. He was, at his core, an optimist.  Sam was humble, caring, generous and always inquisitive.

Sam is survived by his three sons and their families: Ron and Kristen, and their sons Evan and Daniel; David and Liz, their daughter Lauren and sons William and Harrison; and Ian and Valerie, and their sons Adam and Jason. He is survived also by his cousin Martin, whose parents were instrumental in making Sam’s arrival in the United States possible. Most recently, he had the unrelenting support of his sons following the heartbreaking loss of his beloved wife Pearl only nine months ago. He leaves behind close friends and colleagues too numerous to mention, among them Arthur Rose, his childhood friend from Bunce Court.

He will be in our hearts for eternity.  May his memory be a blessing.

There will be a small private ceremony. The family intends to hold a celebration of life in early 2022.